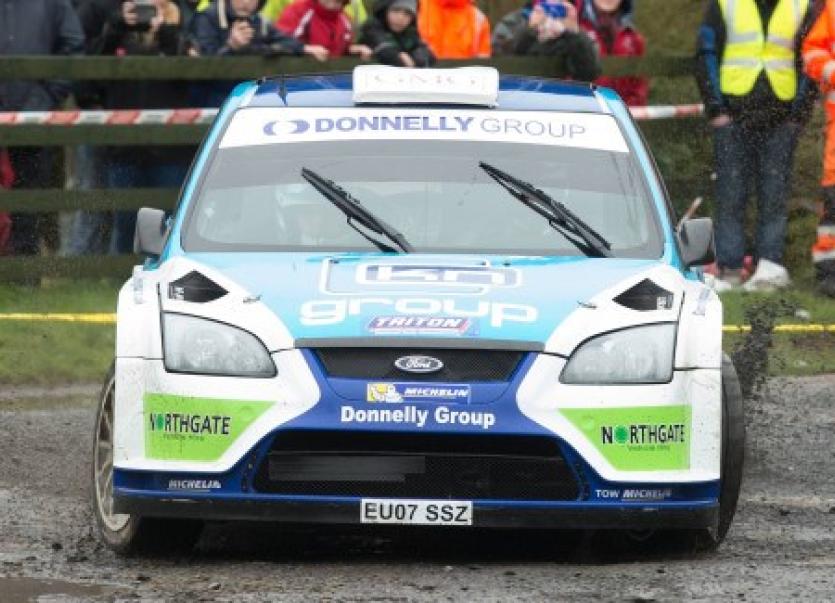 Donagh Kelly and Conor Foley were quickest over Stage One

Donagh Kelly and Conor Foley are the early leaders of the Joule Donegal International Rally.

The Kelly/Foley combination, in their Ford Focus WRC, were fastest over Stage One, Trentagh, in a time of 7 minutes and 48.5 seconds.

They hold just over a two second lead over last year's winners Manus Kelly and Donall Barrett who recorded a  time of 7.50:06.

Kelly and Barrett,  in a Subaru WRC, hold a two second lead over Garry Jennings and Rory Kennedy who, in a Subaru WRC, were third fastest on the stage. Jennings/Kennedy recorded a time of 7.52;6

The other big news is that one of the favourites for the rally, and 2015 winners Declan and Brian Boyle, in their Fiesta WRC ,did not start the race due to a family bereavement.

Damian Gallagher and Mac Walsh, in an Escort Mk 2, set the early pace in the Donegal National Rally, after Stage One.

They were four seconds faster than their nearest rivals. The other big news from the National Rally, is that the  Letterkenny combination of Brian Brogan and Damien McGettigan are out of the rally after stage one.

They rolled their Escort but both driver and co-driver got out of the car and were uninjured.