St. Catherine's FC to host 'A Night with Seamus Coleman'

Major fundraiser taking place at the Blue Haven next month 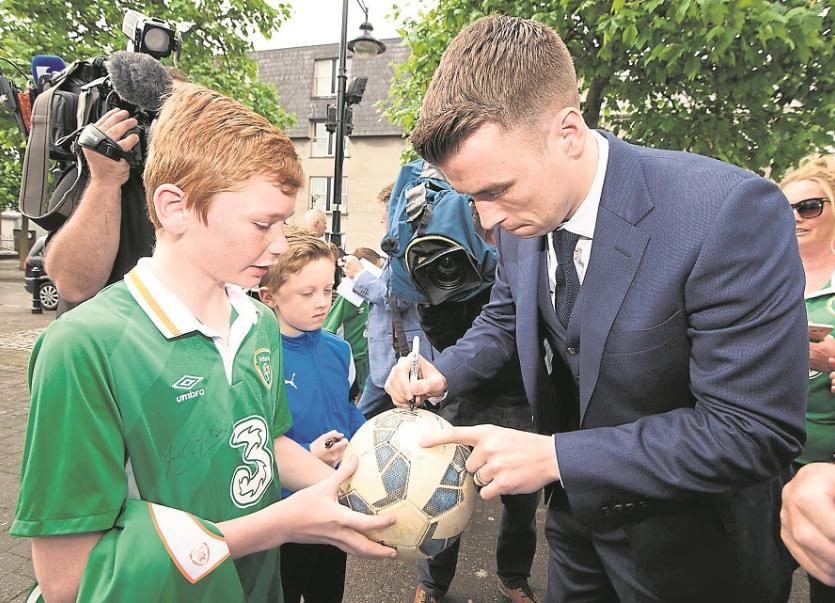 James Tourish getting his football and shirt signed by Seamus Coleman when he was awarded the Freedom of the County by Donegal County Council. Photo: Clive Wasson.

Details have been announced of an exciting fundraising event for St. Catherine’s FC with former player, Seamus Coleman, the star attraction.
‘An Evening with Seamus Coleman’ will take place on Friday night, September 15th at the Blue Haven in Kilcar.
The event has been organised to help raise some much needed funds for the ongoing ground improvements at Emerald Park in Killybegs, and in particular, the astro-turf facilities.
The club are laying a new astro-turf surface and carrying out general improvements to the pitch and hope that the fundraising event will go some way to covering the cost of the project.
Club chairman, Malachy Murrin, said St. Catherine’s are delighted that Seamus has agreed to make himself available for what promises to be a great night.
“We’ve been speaking with Seamus about this for some time now and it’s great that he is going to be with us for this event,” he said.
“The idea of the night is to raise funds for the club and our astro-turf facility. We have the astro-turf pitch around 15 years now, but in all that time, we have done very little with it.”
Malachy said the asto-turf pitch is a vital facility which is used by the 180+ children who play with the club at underage level.
“We have kids coming to us from U-8 right up to U-16,” he said.
“There is tremendous work being down at underage level and the children aren’t just from Killybegs, they come from all over and that’s in part down to the Seamie Coleman factor.
“So we have to have the proper facilities in place to cater for the coaching that goes on with those teams and that’s the reason why we need to carry out these improvements at this time.”
Tickets for next month’s event are sure to sell pretty fast.
Those attending will be able to take part in a ‘meet and greet’ with Seamus Coleman who will also sign autographs and take part in a question and answer session.
Tickets, priced at €20 or €10 for U-18s, are available from club members or by contacting 087 9617436.