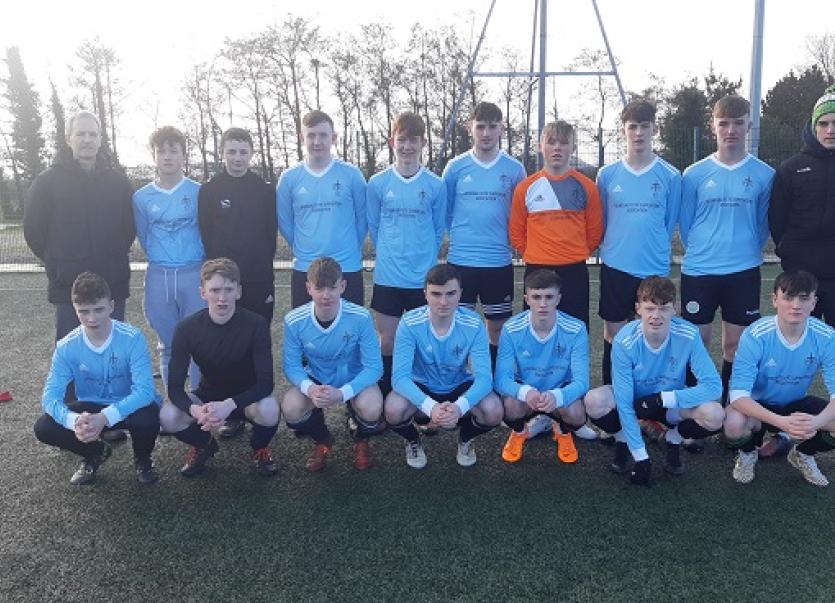 PCC, Falcarragh are through to the FAI Schools Junior ‘B’ Boys National Cup final after a big win today over Glenamaddy Community School from Galway.

The game was played at the Glenea United grounds after PCC had travelled to Sligo a few weeks ago, only for Glenamaddy not to show up. The Galway college claimed that they had not been notified.
PCC offered to play the game at Glenea and Glenamaddy travelled after staying overnight in Letterkenny on Sunday night.
There was a strong breeze at the Glenea grounds and PCC played against it in the first half. They were under some pressure with Glenamaddy forcing numerous corners, but before half-time they struck for the first goal with Ethan Doherty crashing home a thunderous shot from 18 yards.
With the wind at the backs PCC dominated the second half and they added goals from Gavin McGarvey, Calvin Murray and a wonder goal from Keenan Gallagher from all of 60 yards, inside his own half.
PCC will now play Crosshaven from Cork in the final, fixed for Wednesday next, 6th March, most likely at a Dublin venue.
PCC, FALCARRAGH: Oran Craig, Daire Ferry, Shaun Curran, Conor Boyle, Keenan Gallagher, Thomas Doherty, Ethan Doherty, Kyle McMullan, Nathan O'Brien, Blake McGarvey, Calvin Murray.
Rest of panel: Conor Hanna, Kevin Boyle, Paul Johnston, Thomas Ferry, Odhran Doogan, Cahal McGeever, James Geaney.