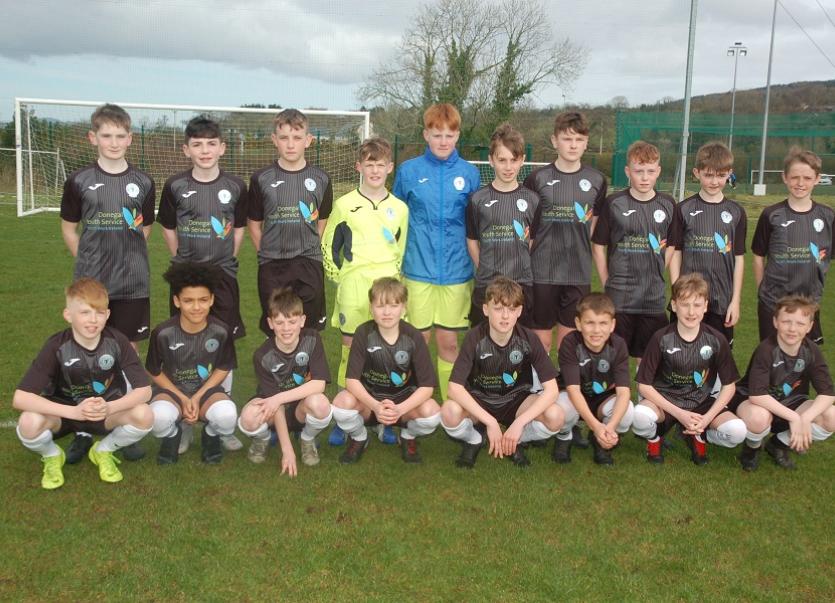 The Finn Harps U-13s are top of their group after a 5-2 away win over Drogheda United Park on Saturday afternoon.

Harps came from 2-1 down at the break to take the three points. Shaunie Bradley scored twice while Ciaran O’Kane, Joel Gibson and Shaun Patton also found the back of the net. The squad now has a break for the Northern Ireland Super Cup before returning to national league action in a fortnight’s time with a home game against Drogheda Utd.

It was Drogheda who opened the scoring as the clock ticked into the third minute when Alex Kinsella’s speculative effort from a free kick dipped in under the Finn Harps crossbar and out of the reach of keeper Shane Adair. Harps has to wait to midway through the half before restoring parity and it came from a well worked corner. The short corner being played to Darragh O’Doherty who whipped he ball to the back post where Ciaran O’Kane rose highest and powered a header past Jody Campion, in goal for Drogheda United.

Two minutes later Harps had the lead. Persistence from Aaron McLaughlin to beat the full back down the right hand side before clipping the ball in to an unmarked Joel Gibson who glanced a header into the net. Harps has a further chance moments later when Gibson was played in on goal by Conor Kelly, though Campion was quick to react and produced a great save to deny Harps.

Harps began the second half at a much higher tempo though were guilty of not taking chances when falling to them.

A typical McLaughlin run saw him set Shaun Patton up for a tight angle however Patton’s shot was narrowly wide of the post. Less than a minute later Campion pulled off a wonderful double save to deny McLaughlin with the ball eventually falling to Patton who this time fired over the crossbar.

Patton finally found the net when he picked up the ball on the edge of the box before unleashing a low strike which arrowed into the bottom right hand corner. Drogheda replied almost immediately when they profited from a mistake at the back from Harps. When a routine Harps clearance was directed off Drogheda’s Marcus O’Keefe he reacted to run on and pass the ball into the empty Harps goal.

Hopes of a point for Drogheda were dashed with 6 minutes remaining when Shaunie Bradley nipped in after hesitancy from Campion to poke the ball past the stranded keeper.

Bradley fired his second and assured the Harps win just two minutes later. A deep cross fell to Bradley who was free at the back post, the forwards initial effort was pushed onto the crossbar by Campion however the Bradley’s awareness to follow the shot in allowed him to tap in as the ball was dropping inside the six yard box.

Kevin McHugh’s boys kick-off their Group A campaign tomorrow morning (Monday 29th July) against Ballyclare Colts (kick-off 11.30) at the Ulster University grounds in Colraine. Their second group game is at the same venue on Tuesday with a 1.30 start against Linfield. Then on Wednesday the final game is against Portadown at the Riada Stadium in Ballymoney (kick-off 12.00). The Group winners go into Super Cup NI while there is also Globe, Vase and Bowl competitions for the sides that finish second, third and fourth.