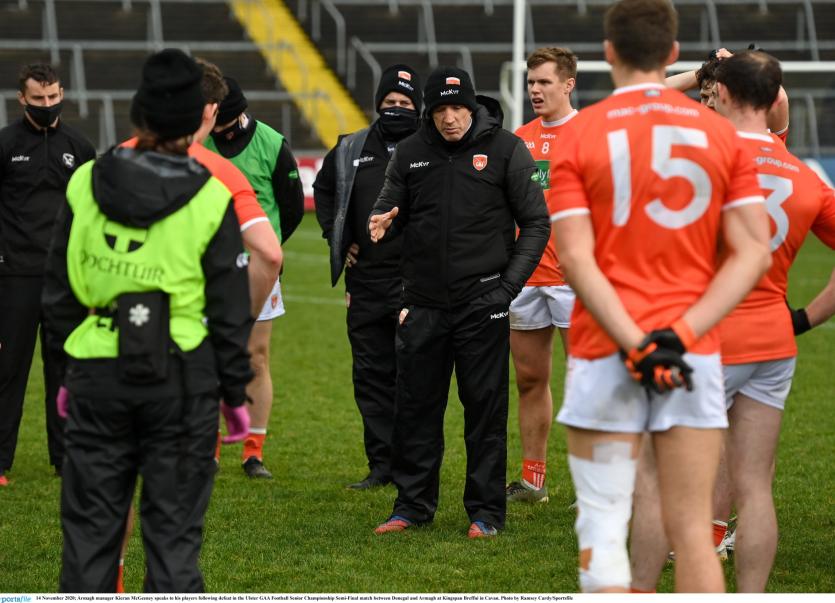 "Very disappointed. We didn't have a cut at them in the first half. In the first period there were loads of scoring chancesin one-on-one positions that we didn't go at. That was probably the most disappointment thing,"said Armagh manager, Kieran McGeeney.
"Then in the second period we were trying to squeeze passes in and against a First Division team, that's what happens us this year. We just haven't got punished to the same degree, 1-7 to one point in that second quarter.
"At least we came out in the second half and had a cut at it. I suppose we were going for goals there and a lot of points were missed. We had to do it to make that up. I would be very disappointed with the second quarter.
"We didn't have a go at them at all and they weren't in their customary defensive shape. We had chances to go at them, we had the players to go at them, we just didn't do it."
McGeeney agreed that Donegal were a quality team, but he was looking at the result from an Armagh perspective.
"Look, we had a decent year. But for the first time this year, I felt we were very, very timid, very meek, standing still when controlling the ball, really disappointing stuff.
"It's not what we trained to do and it was very hard to watch it. You don't mind in the past we didn't have the players with the capabilities to go at teams, but we do at the minute."
McGeeney didn't think the wind was a factor in the game, with Donegal having the advantage in the opening half.
"I felt in the first period we had far more chances than them and we just didn't take them on. We got the ball in quick and we won it, but we didn't put the ball over the bar," said McGeeney, who added that the top teams like Donegal and Dublin will take you on in those positions.
"They might turn and come back out but they will take you on and test you. We did a wee bit in the second half and got a bit of joy out of it, but at that stage you are changing your whole team trying to get a wee bit more momentum," said McGeeney, who kept returning to his disappointment with the first half performance.
"Donegal have been there or thereabouts. A team has different cycles. Donegal are on the top of theirs at the minute.
"Armagh has a chance to start one of their own. But if we are going to be as meek and timid as that, I don't mean in terms of heart of courage, but in not trying to go for chances. Sport is something that, you know, regrets that you have will be about the misses rather than the things you believe is right," said McGeeney, who said he really believed that the present Armagh team are ready to step up.
And in the interview, McGeeney returned time and time again to the one-on-ones which were presented to Armagh. "When you are presented with a one-on-one situation as a player, you should at least have the courage to take the man on to test him. They are all top class defenders, but you should have that ability to try and take him on," pointing to the Donegal goal as example, where Peadar Mogan took on three Armagh players and planted the ball in the net.
"You have to try it. I think it's a good lesson for the boys, but it's a harsh one," said McGeeney, who agreed it was a lesson for Division One as well.
The Armagh boss said that people might be slagging them that it took five or six years to get to Division One, but it is a tough journey.
"You learn a lot of things in Division One, how you play off the ball as well as how you play on it. And we have a lot of lessons to learn in that area too.
McGeeney says that Armagh have to learn about consistency and doing the simple things better. "Donegal have a great system and they stick to it."
The Armagh boss wasn't relinquishing responsibility. "The buck stops with me. I'm the leader. I'm not saying that Armagh, they have one All-Ireland in the bag in 140 years, but I do think we have the players who can compete at that level, I genuinely do. But there is a reason why teams are not always at the top and ability is not always (the main factor).
"We are getting there. You have to commit to a cause. When you look beneath the surface of any team that are not getting there, you see cracks. We have to start to plaster them over," said McGeeney.