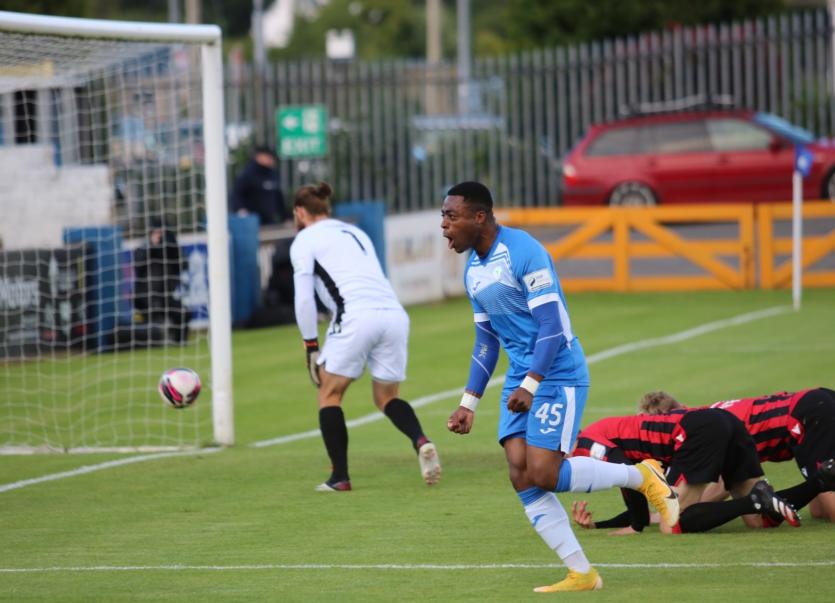 Finn Harps were left to rue the concession of a goal that seemed to be yards offside as Longford Town earned a point at Finn Park.

Then, at 1-1 in the 53rd minute, Harps could’ve went in front only for Lee Steacy, the visiting goalkeeper, managing to save a Barry McNamee penalty on 53 minutes after Aaron Dobbs had handled from Tunde Owolabi’s header.

Harps and referees are a bit like oil and water and following huge protests over the penalty they felt that shouldn’t  have been against Derry City last week and then the one that should have been against St Patrick’s Athletic on Monday. Tonight, they would get and miss their penalty but the issue was an alleged offside, for the Longford opener.

Twelve minutes in, Dylan Grimes struck a wonderful effort off the underside of Mark Anthony McGinley’s crossbar, which rebounded back into play. Aaron Robinson stooped to head back toward goal and Dobbs, looking offside, took a touch and fired in anyways.

Alan Sherlock, the nearside assistant referee, flagged for offside, only for referee Ben Connolly to overrule him - without discussion - and award the goal. The only thing that it might've been was the referee considered that Ethan Boyle, the Harps defender who challenged Robinson, got the touch.

Owolabi has become a bit of an icon around Ballybofey and was on hand to shoot his side level on 18 minutes when he planted the ball high into the Longford net after McNamee was first to the ball ahead of Aodh Dervin outside of the penalty area.

Adam Foley fired just over and Will Seymore found himself in the unusual position of having the freedom of half the park. Striding away, the American’s shot was true but Steacy got behind it comfortably to save. McGinley made a great one-handed save seven minutes before the break from Grimes, who was showing his prowess from outside the area.

Harps picked up 10 points from their first four outings yet only managed to win twice in the 13 matches that followed whilst the Shannonsiders haven’t tasted victory since the opening weekend of the season.

Dobbs spurned a decent opportunity when he headed a Grimes free over at the Town End, whilst at the goals nearer the river, Owolabi forced Steacy to save with his feet moments before he saved McNamee’s penalty with his hands.

From then on, neither side deserved to win in truth and for two sides so desperate for a win, the wait will go on another week at least.