Donegal waltz past Antrim in Ulster U-17 preliminary round 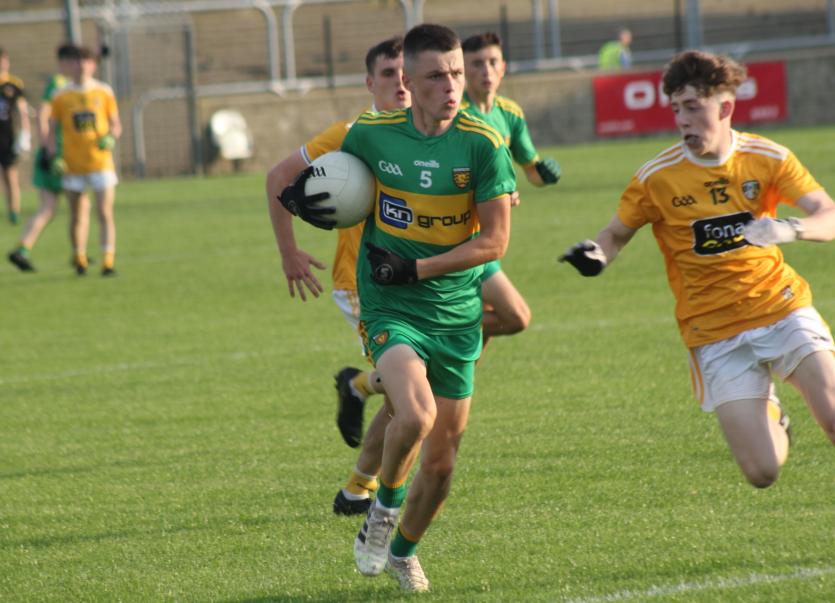 Two goals by Paddy McElwee set Donegal on their way to a comfortable victory against Antrim in the preliminary round of the Electric Ireland Ulster U-17 Football Championship.

The reward for Donegal is a quarter-final away to Monaghan in Clones this coming Wednesday after easing their way through.

Downings forward McElwee showed composure as he picked his spot from close range after he was located by Conor McGinty, with Kevin McCormack also playing his part in the build-up.

The goal put Donegal seven up at half-time and McElwee added his second right after the break when he tucked in a rebound after Luke McGlynn’s pop at goal was saved by Antrim goalkeeper Padraig Linton.

McGlynn, the Donegal captain, would end the evening with six points, while McCormick hit 1-5 from play, with his goal put on a plate by McGlynn in the 74th minute.

The side managed by Luke Barrett, who have no Buncrana Cup experience under their belt of course, showed plenty of fluidity on the ball.

By the end of the first quarter they’d built up a lead of 0-7 to 0-3, with six players between the numbers eight to 15 already having marked their names on the scoresheet.

Conor McGinty, Conor Reid, Daniel Marley, Paddy McElwee and McGlynn had scored one apiece, with Sean Ward stroking over a couple of points. As early as the fourth minute Reid got in behind the Antrim defence and opted to take his point instead of getting into a battle of wits with Linton.

Defensively, Donegal worked hard, with Antrim’s early scores coming from Tom Shivers, who was replaced on eight minutes as they sought to firm up their defence, while Connor Hastings had two frees. Seamus Hastings’ visitors looked lively enough themselves on occasion - in the first half anyways.

Aaron Cullen, the Donegal goalkeeper, stood firm to save well from Niall Fallon on 19 minutes and Antrim enjoyed a much improved second quarter, restricting Donegal to just three points - with McGlynn and Kevin McCormack, with two, the scorers by first half injury time.

However, McElwee’s goal in the second of the at least two minutes that were signalled. The Saffrons only scored three themselves, with Diarmuid Rogan’s brace and Johnny Hannon on the mark. At the interval, Donegal were 1-10 to 0-6 ahead.

Ethan Friel pointed having just come on and then on 34 minutes McElwee stabbed home his second goal to give Donegal a 2-11 to 0-6 advantage. When Callaghan, also just on, adding a third goal it was a matter of procession. Donegal were 3-13 to 0-6 ahead as the water-bottles were thrown out for the last time on a lovely summer’s evening. Antrim were struggling off the tee.

When Paudie Gowdy stroked over a free for Antrim on 54 minutes, it was their first score since before half-time. Callaghan from Naomh Columba made a fine impression in the second half with 1-3. McCormack slapped home Donegal’s fourth game with the last play of the day.