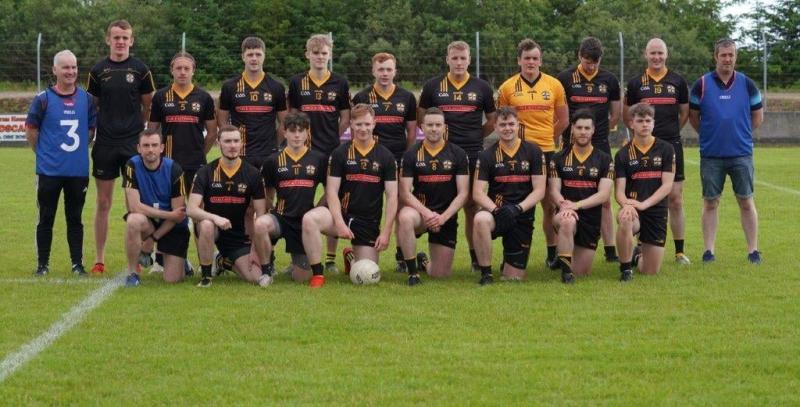 Patrick White is the player-manager of Naomh Ultan having taken over from veteran clubman Liam Kennedy at the start of the season.

It was inevitable given White’s lineage that he would one day take on a management role in the club. But at 30 and still playing for the club and a member of the club’s senior squad that was down the road.

“The honest truth is the club were looking for a manager at the start of the year and they couldn’t get anyone to do it,” he explained.

“I’m a teacher so I had the time and I had spent a fair bit of time in recent years looking at games from the dugout. I've had a lot of injuries, so I had a fair idea what the job entailed.

“I must say I’m liking it. I have a very good management team and are all good club men and they make it easy for me.  Paul Byrne, Paul Gallier and Joe Kennedy make the new men's backroom team.

“They are all former players with the club. Paul Byrne has been a mentor/ selector before and was involved in a junior championship winning team.

“There is obviously plenty of GAA chat in the staff room and I’ll never too far if ever I need any advice about something,” White added.

Naomh Ultan play in Division Four of the All-County-Football League and are currently lying in fourth place in the table.
They are just two points adrift of league leaders Naomh Padraig, Muff, and one point the two Rosses sides, Na Rossa and Naomh Muire, Lower Rosses, with a game in hand on all three.

“The season so far has gone well enough for us apart from the opening game in Muff. We’ve won three of our last three games.”
They have not looked over their shoulders since and were 2-18 to 1-9 winners over Naomh Padraig, Lifford, in Dunkineely, and then ran out 2-21 to 0-11 victors against Pettigo.

Last weekend they had eight points to spare at the end of the clash with second placed Na Rossa in Lettermacaward, 4-11 to 3-6. White played his first game of the season last weekend against Na Rossa, after missing the opening three games through injury.

“We’ve played well in the last few games but there is still a long way to go in the season and we have a number of big games coming up in the next few weeks,” he added.

“There are a lot of good teams in Division Four and on any given day any club in the league is capable of getting a result. We are like all the teams when you are in Division Four you want to get out of it and we are no different.
“We want to win promotion but we are well aware there are a number of teams chasing the two promotion places. We are not looking too far ahead. We are just taking it one game at a time.”

The new man calling the shots in Naomh Ultan is very much in favour of playing the  league before the championship.

“I’m all for it and it probably suits the bigger clubs with big panels even more than small clubs like Naomh Ultan,” he said. “We are working with a small panel of players but the new system still gives us the opportunity to blood young players and introduce them to senior football in the league.

“By the time the championship comes around we should have a settled team. I’m all for it.”

Jack Boyle, Jonathan Bach, Kyle Breslin, Mark Hutchision, Darragh Murrin, John Watters, James Byrne and his own younger brother Ciaran White are among a talented group of young players that have been given their senior wings this season.
They are now learning to fly in senior football for the first time.

Combined with established players such Alan Lyons, Cian Kennedy, Dermot Gallier, Aaron Kyles, and Aidan Duddy there is renewed hope in and around Dunkineely and right around the parish of Bruckless and Kilaghtee, that Naomh Ultan may be about to flourish once more.

And there is a belief that the new man at the helm, Patrick White and his management team may be the men to deliver.