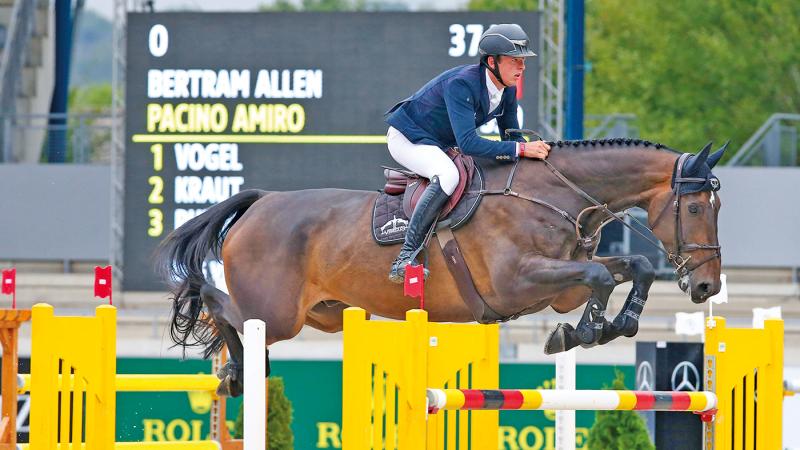 A horse that is owned and bred in Donegal is the chosen mount of leading Irish showjumper Bertram Allen in the Tokyo Olympics.

Pacino Amiro was bred by one of Donegal’s top showjumpers, Simon Scott in Convoy, from sire Pacino and out of Scott’s mare Carnone Dancing Queen (by NC Amiro).

The horse was sold to Aiden McGrory, Ballintra who sent him to Kenneth Graham’s stable Lenamore in Muff who produced him. Among the shows in which Pacino Amiro competed as a young horse was the annual showjumping event in Donegal Town.

Pacino Amiro was brought to Bertram Allen to ride after the Wexford-born showjumper expressed an interest in him. And when the team was picked for Tokyo, Allen was delighted to take the Donegal horse to the Olympics.

In an interview with UK publication Horse and Hound earlier this year, Allen said: “When you know his quirks, he’s lovely to work with – he’s just a big child of a horse and you have to take your time.

“If you walk up to him too quickly, he can sometimes get a fright, but he’s kind and gentle, very level-headed, with a lot of scope and always tries to jump clear. With some horses, you’re nervous of what the course-builder is going to produce but you know nothing is going to faze him – he’s a serious horse.”

In the same article in Horse and Hound, owner Aiden McGrory said he had been impressed by Pacino Amiro’s lineage, and was delighted to be able to buy him when he was nearly a year old. The horse showed a lot of promise, and Bertram Allen’s interest was too good an opportunity to pass up.

“Even as a four-year-old, he had great athleticism and quality, and he was reserve champion at Dublin at that age,” said Mr McGrory.

“He’s been well placed all through the age classes and he’s always shown that potential for a bigger course.

“I usually do a bit of dealing and it’s only in recent years I’ve started to keep some on – this is what every owner wants, it’s an amazing experience.”

Olympic show jumping gets underway in Tokyo on Tuesday.