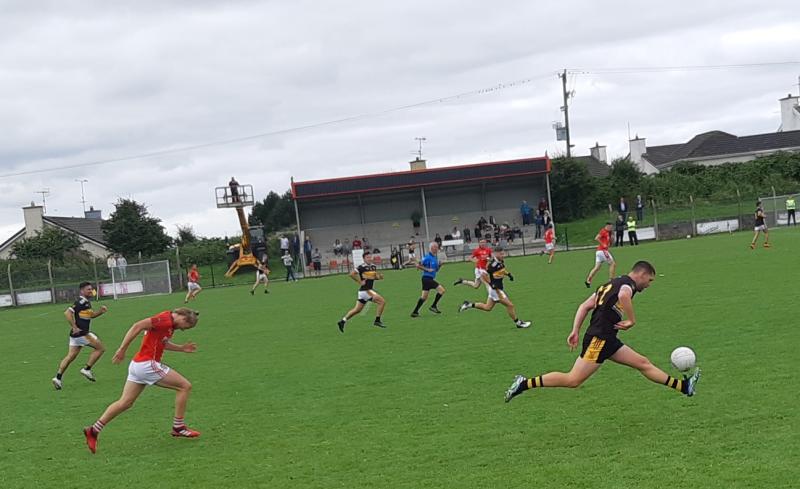 To be in Bundoran to watch the skill of Michael Langan was the place to be today as he gave a masterclass in the second half to help St Michael's to victory.

Langan started on the bench but got the call after 22 minutes with Bundoran threatening to close out the game with the number of goal chances they were creating.
But luckily for St Michael's, the home side managed just one goal from five good goalscoring chances. Oisin Cannon in the St Michael's goal must be given credit.
Jamie Brennan finished their only goal in some style after good work from Paul Brennan, Alan Russell and Adam McGlone on three minutes, but he hit an upright after rounding the keeper later, while Timmy Govorov, Cian McEniff and Alan Russell fluffed their lines.
By the first half water break Bundoran had a narrow advantage, 1-3 to 0-5. Oisin Cannon (free in first minute), Carlos O'Reilly (mark) and Colin McFadden had early point, the latter going just over Conor Carty's crossbar.
Edward O'Reilly hit a great point followed by a fifth from Andrew Kelly. On the home front, Gary Clancy (2) and Cian McEniff had their points.
Govorov's goal chance came just after the water break and that was the signal for Michael Langan's introduction. Cian McEniff and Adam McGlone pushed the lead out to three and St Michael's almost had a goal chance when Conor Carty punched a high effort out. Carlos O'Reilly was on to it quickly and found Conan Brennan, but Conor Carty was equal to his effort. They did get something from the move with Andrew Kelly pointing a free.
However, before half-time points from Jamie Brennan (free) and a good effort from Timmy Govorov left it 1-7 to 0-6 to Bundoran at the break.
But the second half was a completely different affair as Langan dominated affairs. Martin McElhinney set the tone with a point from the throw-in. The visitors were level just over a minute later when Ruairi Friel was upended. From the spot Andrew Kelly fired to the net.
And by the 39th minute St Michael's were three clear with points from their three sharpshooters Carlos O'Reilly, Martin McElhinney and Michael Langan.
By the second half water break, the three point margin remained with Jamie Brennan and Adam McGlone converting frees for Bundoran wile Carlos O'Reilly and Andrew Kelly (mark) replied for St Michael's.
McElhinney and Langan pushed the lead to five and from there to the end St Michael's kept Bundoran at arm's length, denying them the space for a much needed goal.
By the finish Langan (3) and McElhinney (4) had contributed seven of their second half points and they also had a goal disallowed when Colin McFadden got in to palm home Carlos O'Reilly's cross. Referee Jimmy White intimated a square ball, but the ball from Michael Langan to set Carlos O'Reilly free was worth the admission money alone.
St Michael's finished with 13 after they lost Conan Brennan to a second yellow early in the last quarter while Michael Cannon was shown black in the final minutes.