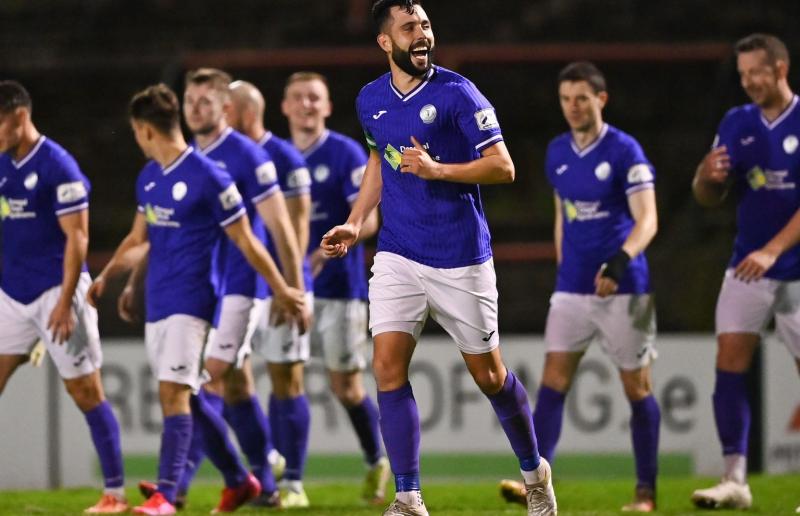 Finn Harps produced a bit of a rope-a-dope at Dalymount Park to fashion an excellent away win at Bohemians.

Ollie Horgan’s team were up against it in the first half and having weathered the storm managed to nab goals after the break through Ethan Boyle and then Dan Hawkins late on. Then, in the third minute of injury time, Liam Burt scored a belter from the edge of the area to half the Bohemians deficit.

Harps had been only playing in occasional spurts before getting ahead, with the Phibsborough residents pushing the case in the first half. Harps started the second period well and managed to get their noses in front, which gave them something to hold onto. That lead goal came when Boyle ventured forward again and hit a shot from the angle of the penalty area, which bounced on its way across James Talbot.

Then, with 10 minutes to play, Hawkins tickled home a second into the bottom corner when he got a touch onto a cross from Karl O’Sullivan to leave Talbot completely flat-footed. It almost happened in slow motion.

That’s how Harps might’ve felt the depth of injury time went after Burt had scored for Bohemians. However, Ray Matthews’ final whistle made sure of three vital points, especially with Waterford and Dundalk - the teams immediately beneath Harps in the table - having beaten Drogheda United and Sligo Rovers respectively.

Harps looked tired as they left the pitch on Tuesday night at Oriel Park, having lost 3-1 to Dundalk after extra-time. Bohemians played their part in a dramatic 3-3 draw against Derry City on Monday. Having lost 4-0 on their last visit to Dalymount, some might’ve feared the worst. Harps, though, played it well and their showing would’ve taken a few miles of the lengthy journey back to the north-west.

Donegal’s own Georgie Kelly, from Tooban, has been on fire this season and on 11 minutes he peeled off behind the Harps defence to head a cross from Burt across the brows of Gerard Doherty’s goal and wide. It was a warning shot. Well, a warning header.

In the thick of it again, Kelly took on another Burt centre and with his back to goal laid off to Keith Ward, whose shot at goal was blocked by Jordan Mustoe. Keith Long’s team were cranking up the pressure, with all hands to the pump for Harps, who banked up reasonably well with Sean Boyd and Tunde Owolabi looking isolated up top.

Dave Webster had to be alert to cover a run from Kelly and get a block in at the expense of a corner. Ward got in behind Boyle and Ryan Rainey and might’ve gone down.

Although the hosts were pushing the case, Harps did see a Shane McEleney effort seem to deflect over the crossbar, although no corner was given, and Rainey’s shot hit the side-netting.

Harps were putting in a couple of hefty challenges and Boyd, Ryan Connolly and Mustoe all picked up first half yellow cards. It was 0-0 at the break.

The sides met last Monday week in Ballybofey, with the visitors running out winners on a 2-1 scoreline with Promise Omochere and Kelly scoring before Rainey pulled one back late on.

The best chance Harps created was in the 47th minute when Barry McNamee and Mustoe stole possession on the right edge of the Bohemians penalty area. McNamee squared to Olowabi, who took a touch and from 12 yards saw Ciarán Kelly made a last-ditch challenge and the ball flew over for a corner.

Then, from Connolly’s delivery, Ethan Boyle improvised to steer an overhead kick over James Talbot’s crossbar.

Boyle then put Harps into an unlikely lead. They managed the time well in the third quarter, although Ross Tierney’s fizzing shot, which ended up not far off target, did provide unrest for a second.

Harps were dangerous on the break, with O’Sullivan, just on, placing in a delicate cross that Owolabi glanced and Boyle came in and back and just couldn’t get it on target.

Boyle, who was everywhere, made an excellent block when Bohemians looked certain to level on 74 minutes, following a one-two between Ali Coote and Tierney.

With the match completely loose, Owolabi broke away with only Rob Cornwall home for Bohemians, the Belgian cut inside the defender only to curl a right-footed shot wide of Talbot’s post. It would’ve put the game to bed.

The bedside lamp could’ve been switched off when Hawkins scored his first goal for Harps and all in all, they weren’t put under massive strain until Burt’s late one made for a restless enough final minute or so.