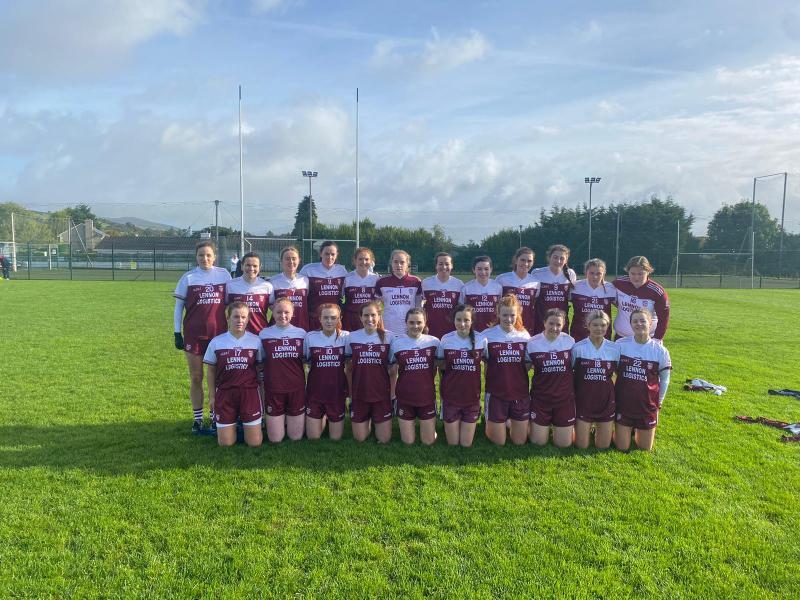 The Termon team this morning at Carrick Field in Moville

McLaughlin was unplayed at times and managed to clock up an exceptional haul of five goals and six points at Carrick Field. It means that Termon have a chance to avenge last year’s loss to Glenfin, while Moville, just like 12 months ago, just fell short of a final place.

While McLaughlin was the one leading the line for Termon, Jodie McFadden and Ciara McGarvey also found the net. At the other end,

Niamh Hegarty did a commendable job up top for the Inishowen side.

By the first water-break, the visitors looked comfortable enough, with Jodie McFadden putting them 1-5 to 0-2 ahead with McLaughlin having opened her goalsoring account on eight minutes, holding off a series of challenges before shooting past Aoife McLaughlin.

Mooville took 13 minutes to get a first score, through Kate McCleneghan, and it kick-started their challenge, with Hegarty an intricate part; her goal on 19 minutes sparking some hope among the local support. Moville had clawed their way back to just two down, 1-6 to 1-4.

However, that’s when McLaughlin caught fire, adding three goals before the break. Firstly, she played a one-two with Ciara McGarvey before goaling on 22 minutes. Moville were struggling to contain the county forward and when she was played in again, she did that trademarked twist and turn before netting her hat-trick.

With some of the Moville players trying to unravel themselves, McLaughlin, faced with a light blue wall, fainted and dummied and planted the ball into the bottom corner of the net. Eye of the needle stuff.

The home team had chances of their own too, with McClenaghan hitting the butt of a post with an effort at goal and Niamh McLaughlin steering a penalty inches wide after Hegarty was adjudged to have been fouled.

Scores came and went at either side at the start of the second half as Andy Connors’ Termon were keeping Moville at arm's length, with All-Star nominees Evelyn McGinley and Nicole McLaughlin holding firm. A fifth goal came on 37 minutes when McLaughlin drove at the Moville defence and squared for McFadden, who drove into the top corner for a lead of 5-10 to 1-7.

Moville were creating chances up front and Eimear McLaughlin steered home a goal from a rebound on 39 minutes with Orla Corry having made a fine save from the first effort.

Termon though, weren’t for letting their coattails get clung onto and each time Moville seemed to breathe some hope into their challenge, the team from the Burn Road would stamp it.

An emphatic example of this was when McLaughlin posted her fifth goal of the day. This time she ran from deep and turned onto the right foot before unleashing an unstoppable drive into the net on 41 minutes. Termon were 6-10 to 2-7 ahead.

Thirteen minutes Moville were awarded a second penalty when Áibhe McDaid fouled Niamh McLaughlin - with the Donegal captain requiring treatment for a few moments - and this time Hegarty took the kick and scored. McClenaghan, late on in the second half just as in the first, was denied a goal by the post.

In a flash, Termon worked the ball down the field and demonstrated their cutting edge when Ciara McGarvey scored their seven goal deep into injury time.