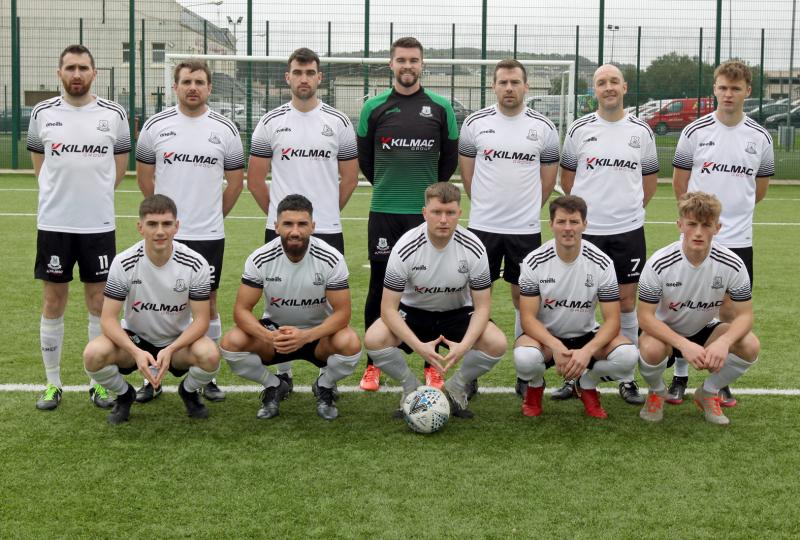 Kilmacrennan Celtic FC have released a statement in relation to the handling of the Donegal League Premier Division last season.

Cappry Rovers were eventually awarded the title following a court ruling and were presented with the trophy for the 2019/20 season last month. The statement reads:

“Having allowed a reasonable time to pass for reflection, calm and dialogue to occur, the committee of Kilmacrennan Celtic FC feel that it is now appropriate for us to provide comment on the events around the Donegal League campaign of season 2019/20.

This statement is intended as a means of clarification for our Management, Players, Supporters, Sponsors and Community Members, who have all sought answers following the announcement, some weeks ago by the Donegal League & FAI, respectively.

We also feel that it is of vast importance to our credibility and integrity that our colleague clubs in the Donegal League are made aware of the circumstances around what has now proven to be a fateful decision.

From the outset, we wish to acknowledge the sterling work of the men and women who form committees and clubs for the betterment of their communities – inclusive of those who give of their time tirelessly and relentlessly to organise governing bodies, locally, provincially and nationally.

We respect the role played by these individuals and are hugely indebted to their commitment.

Kilmacrennan Celtic FC participated in a keenly contested match, away to Kildrum Tigers FC on 2nd August 2020. It was during this match that one of our players was given 2 yellow cards, resulting in a red card.

Ordinarily, the rules around this are very clear – that the player will serve an automatic one match ban, due to a red card being awarded, which was something the Management of Kilmacrennan were expecting.

Immediately following the Kildrum Tigers FC match, the referee made a point of speaking to the player who received the red card and members of the Kilmacrennan management team to inform them that he had issued the 2nd caution in error and that he would be highlighting his error within his match report. To his credit, the referee did take responsibility for his error and did indicate this within his match report.

Following on from this, there was dialogue between management representatives of Kilmacrennan Celtic FC and the Disciplinary Secretary of the Donegal League. The Disciplinary Secretary verbally advised that the player in question had been dismissed erroneously, that he was available for selection the following week and that he would miss the next again match, due to having accumulated four yellow cards throughout the season.

Owing to our interpretation of the rules, this instruction was, once again checked – this time by way of a text message exchange. The exact wording of this exchange is included below, with names redacted
– “Hi [name redacted], (Disciplinary Secretary), can u confirm by text that [name redacted], (Kilmac player), is free to play this Sunday in Cranford. I just want to make sure that there are no communication mistakes. Thanks [name redacted], (Kilmac Management team member).

The exact wording of the reply is included below, with names redacted –
“[Name redacted] is free to play Sunday... Referee [name redacted] rescinded the sending off. Admitted he made a big mistake”.

On foot of the above communication, from the Disciplinary Secretary of the Donegal League, Kilmacrennan Celtic FC included the player for selection v Cranford FC on Sunday 9th August 2020.

Following this match, upon protest from Cranford FC, the Disciplinary Committee, (inclusive of the same Donegal League official who had previously given clearance for our player to participate in the match v Cranford), determined that a breach of the rules had occurred and that Kilmacrennan Celtic FC were to be deducted three points and a 3-0 should be awarded to Cranford FC.

Throughout this process, Kilmacrennan were denied the natural justice open to us via the Donegal League’s own rule book, as we were not informed of, nor invited to participate in, a hearing which the outcome of had direct consequences for our club.
Kilmacrennan Celtic FC then mounted a successful appeal, via the Ulster FA, which was contested by Cappry Rovers FC, via the FAI. Initially, the FAI had ruled this appeal out of order, in a letter dated 30th September 2020, and their appeal fee returned.

As far as Kilmacrennan were aware that was an end to the matter and the trophy/league medals were awarded to Kilmacrennan by the Donegal League following this decision by the FAI.

For reasons best known to others, it was then decided by the FAI to direct a review by the Ulster FA of their original decision some 264 days after the original decision was made. It should be noted the FAI could not direct an appeal hearing for an appeal they had already dismissed so it seems this review was directed by the FAI.

The FAI threatened a disciplinary investigation if the Ulster FA did not review their original decision. The Ulster FA reviewed their decision and made the same conclusion as they previously did in favour of Kilmacrennan however as the Ulster FA had made another decision it allowed Cappry a second opportunity to appeal to the FAI for a fee of €500.

Our understanding is that if the Ulster FA did not make a second decision Cappry would have been unable to appeal to the FAI to overturn the previous decision made. All the actions of the FAI from 30 September 2020 to this point took place unbeknownst to and without the participation of Kilmacrennan.

Kilmacrennan Celtic FC were not notified by the FAI of the new hearing or given any information about the new hearing from the FAI. We had to liaise with the Ulster FA to receive information on the case. The Donegal League were asked to attend the hearing before the FAI but declined. The result of this hearing was the FAI changing their original decision with Cappry FC being awarded the league.

Kilmacrennan Celtic felt as a club that we were being punished for following the advice given to us by the Donegal League and decided to appeal the decision of the FAI to arbitration. We first emailed the FAI to see if we could have another hearing with them, but we were referred to the FAI Handbook Sec 7 Disciplinary Regulations, Section 13 Arbitration, Regulation 92, Arbitration.

This meant we were not getting another hearing like Cappry FC received and must go to arbitration in the FAI instead. Kilmacrennan appealed to the FAI appointed arbitrator however the arbitrator did not overturn the FAI decision to award the league to Cappry.

As a club Kilmacrennan Celtic FC a club run by volunteers and donations we could not raise the funds to take this arbitrator’s decision to the Court of Arbitration for Sport so the decision of the FAI must stand without an appeal.

In summary, Kilmacrennan Celtic FC have acted, at all times, in line with information provided to us by the very official who assumed responsibility for the correct administration and governance of the Donegal League’s own rules, UFA rules and FAI rules.

Disappointingly, it would now appear that the information dispensed to us was at variance with these rules – something which has proven to have had a direct consequence on the destination of a league championship.

As a club, we can have an enormous pride in the way that we performed both on and off the pitch throughout the 2019-20 league campaign. We have acted on advice given, by official(s) that are installed, supposedly, to ensure compliance. We would hope that, in the very least, there is learning to be had from these events and, hopefully, some serious self-reflection for the individual(s) concerned.

We wish every team in the Donegal League the very best of luck this year and may the best team win it on the field of the play. After a further recent request Kilmacrennan Celtic have delivered the original Donegal League Cup back to headquarters on week starting 27/09/21.”