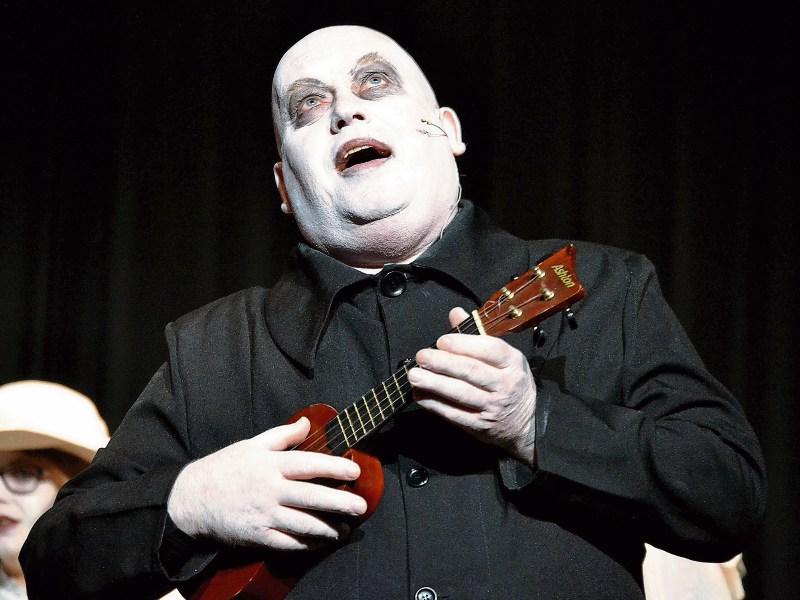 There wasn't a spare seat to be had in the Abbey Centre last night, at just the second peformance of Ballyshannon Musical Society's production of The Addams Family.

Democrat reporter Sue Doherty who, as usual, arrived at the last minute, nabbed a seat smack dab in the middle of the front row.

As a lifelong fan of all things macabre, and dating my devotion to The Addams Family right back to the black and white original tv series as it first aired in the States, I came to this show with big expectations. And boy did Ballyshannon Musical Society deliver.

The standard of the show, from any angle you want to look at it, was extraordinary, doubly so when you remember that this is an amateur production in a fairly small town.

It's almost impossible to believe that this was Moya Ferguson's first attempt at directing either a play or a musical. What an ambitious undertaking to start out with! She proved more than equal to the task, however, with a find eye for a lot of the minor details that other, more experienced directors often overlook. For example, in the curtain calls, each actor, including every member of the chorus, had a specific aspect to their bow or a gesture that reflected their particular character.

Acting, movement, sets, costumes, makeup, sound and lighting were all highly stylised, in keeping with the very special mood unique to The Addams Family.

One unusual aspect of the show is that the score is very heavily weighted to the male characters, who sang the vast majority of the songs. Amateur musical societies usually have a lot more female members than men, so it is all the more amazing that Ballyshannon were able to more than rise to this challenge.

John Larkin as Gomez was a revelation. I can't imagine how many hours he spent listening to and watching Antonio Banderas to perfect his manic Latin lover persona. All I can say is that it more than paid off. His energy, passion and commitment to the character never flagged for a second and he delivered the pathos, comedy and songs with tremendous panache.

Liam Winters as Uncle Fester was also a revelation, suprisingly providing the lyrical romance that every musical demands. I'll say no more so as not to spoil it for those of you who haven't seen the show yet.

Audiences need no introduction to Farrah Bogle, who has delighted in previous shows. Here, though, she was playing very much against type and did so with aplomb. It was almost impossible to take your eyes off her, her performances was so compelling.

Hannah Brennan as Wednesday and Mary Hoey as Alice were also seriously impressive, as was the rest of the multi-talented cast and chorus.

The show continues through to Saturday, at 8pm nightly and with a matinée at 3pm on Saturday as well.