The concert will feature moving tributes and superb musical performances 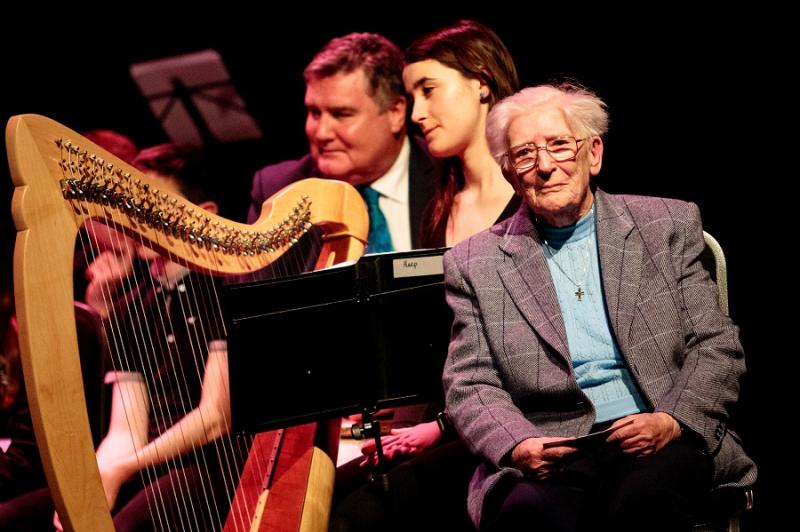 The late Sr Concepta Murphy at An Grianan Theatre

There are messages and music from Donegal, across Ireland, Switzerland and even the United Arab Emirates in a special online concert in memory of Sr Concepta Murphy, Ballyshannon.

Sr Concepta, who died in September, was a musical pioneer in Donegal. She helped to set up the Donegal Music Education Partnership (DMEP) and also the Irish Association of Youth Orchestras, based in Cork.

The one-hour concert is being hosted on the DMEP Facebook at 7pm on Friday evening.

Musicians featured include flute player Amy Gillen, originally from Bridgetown and now in UAE. Last year Amy won the prestigious Tagore Gold Medal at the Royal College of Music in London. Amy is accompanied by Kumi Matsuo, herself a virtuoso pianist from Tokyo.

There’s some cool jazz from twins Conor and Micheal Murray from Falcarragh, playing with the remarkable percussionist David Lyttle. This is also the line-up on the twins’ debut CD, ‘Murray’s Law’, out next month.

The Donegal Youth Choir, conducted by Sara Laughlin, will have another video as follow-up to their online success with Coldplay’s song ‘Fix You’ last year.

Composer Vincent Kennedy from Dublin, who conducts the Donegal Youth Orchestra, is in performance himself on trumpet.

Martin McGinley, DMEP manager, said the concert will be a small gesture in tribute to a woman who did so much for music in Donegal.

“Sr Concepta had a lifelong interest in music, and in young people playing music,” he said.

“It was truly a great day for Donegal when she arrived at the gates of the convent in Ballyshannon – in a sports car, as the story’s told!”

Dr Martin Gormley, director of schools at the Donegal Education and Training Board, said Sr Concepta played a major part in the campaign to get classical music tuition set up on a proper footing in the county.

“She shares the credit for getting the DMEP up-and-running as part of Donegal ETB from 2005,” said Dr Gormley.

“The lives of thousands of young people in Donegal have been changed as a result.”

DMEP administrator John McIvor said the concert will illustrate the quality and the range of music happening across Donegal, and the musical links it has with other parts of the world.

He said: “We have everything from baroque flute playing to opera singing, from traditional music on the cello to the recent number one hit for Olivia Rodrigo, ‘Drivers License.’

“There is a flourishing music scene in Donegal at the minute, and hopefully it will get back to full operation as the lockdown is lifted.

“In the meantime it’s great to have this online celebration for Sr Concepta and what she achieved.”

Sr Concepta was originally from Kinsale in County Cork. Her sister Eithne Cummins, relatives and friends in the town will be among those checking out the concert on the DMEP Facebook page tomorrow night at 7pm.

Also expected to look in are the nuns and staff members of St Ann’s Convent in Ballyshannon, and Sr Concepta’s cousin Sr Mary O’Donovan, Donegal Town.

The concert is part of a ‘Music Week’ on the DMEP-Donegal Music Education Partnership Facebook page, with new videos each day this week.

More information is available by calling DMEP on 074 91 76293 or emailing musiceducation@gmail.com