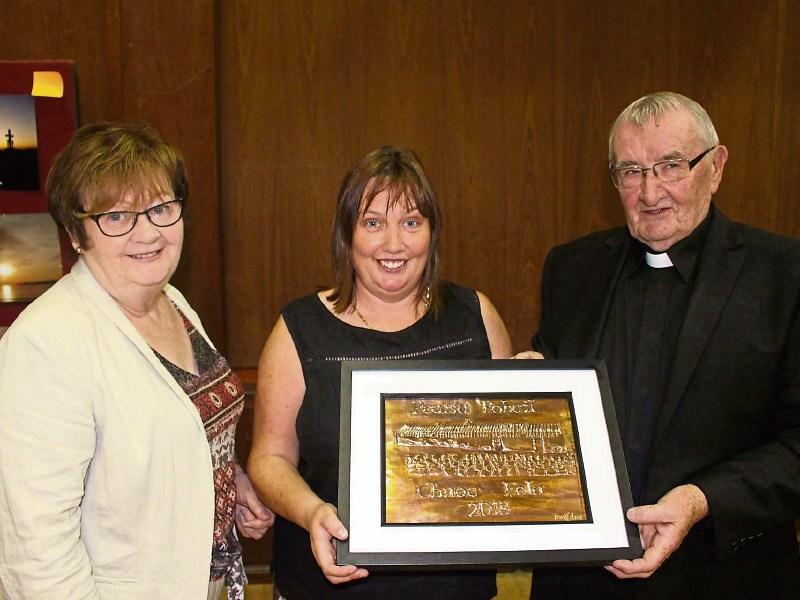 Treasa Ní Ghallachóir was named as the ‘Cnoc Fola Person of the Year 2018’ in Ionaid Pobail Chnoc Fola last weekend.

Treasa is well known across the parish and is a diligent and recognised worker in the Cnoc Fola area. The announcement was made by the Cannon Fr Michael Herrity.

Canon Herrity said Treasa devotes endless hours working with the youth of Cnoc Fola. She has set up two youth clubs in the district, one for the youth and one for teenagers. She accompanied a group of the youth club members to Medujorge last year.

This year, she is travelling with club members to Pope Francis’ Mass in the Phoenix Park at the end of August. Each year she organises ‘clean up days’ in the various town lands of Cnoc Fola.

She was also one of those responsible for the beautiful garden, ‘Garradh Dhonnchadh’ which is located at St. Colmcille Church. The garden is one of those which people sit to reflect in and has a real sense of peace and serenity.

Treasa was also among those who organised a day in August of last year to spray abrasive plants in the area. The project was a very successful one and many of those from the area learnt a lot about the plants and how to eradicate it.

Canon Herrity added that she is an expert at the new technology and was always happy to give a helping hand to those having difficulty with their computer. He said Treasa was always trying to promote the Irish language and culture and praised her for her work with Féile Chnoc Fola for many years. He said she was enthusiastic worker and added she was a good as any county councillor. To mark the occasion Mary Mac Pháidín and Canon Herrity presented her with a lovely picture crafted from copper by Donegal Copper Craft.