Do you know restorative practices are? This short video was made by young people in Donegal through the support of Foróige under Donegal Education and Training Board's Peace IV funded Restorative Practices project in 2019.

It explains this concept in clear and easy to understand terms and shows the benefit of using restorative practices to resolve conflict.

This project is supported by the European Union’s PEACE IV Programme managed for the Special EU Programmes Body by Donegal County Council.

Foróige launched the video which is aimed at explaining the concept of restorative practices to young people and adults.

This project involves nineteen post-primary schools (ETB and non-ETB) and Youthreach (early school leaver) centres from across the county and Foróige.

Restorative practices provides an ethos for making, maintaining and repairing relationships and for fostering a sense of socialresponsibility and shared accountability. It understands that when harm is done to people and relationships, it creates obligations and liabilities and focuses on repairing the harm and making things right.

The video was created by young people with the support of a motion graphics designer and Foróige staff. It began with Restorative Practices training for the fifty young people and staff year over the course of a day. The young people expressed an interest in becoming involved in the production of an animated video that would explain Restoratives Practices in a clear and succinct way. The aim was that the video would be used both for those actively engaging in Restorative Practices as well as those who were introducing the concept to young people, youth workers, teachers, trainers in both youth services and education centres and schools for the very first time.

During a Restorative Practice residential, Foróige staff facilitated workshops with the young people to reflect on the training they had received and what they had learnt. They worked on their script and met with the motion graphic designer to develop their ideas and capture what they wanted on the final video. Two of the young people did the voice overs on the video which was a first for them.

Foróige Project Leader Susan McLoughlin noted, “The young people achieved so much in the process of making the animated video. Most of them had never even heard of Restorative Practices before. To think that they now have a professionally made video that will explain and promote Restorative Practices as a positive way of dealing with conflict situations is a real credit to all of them. Our thanks to Donegal ETB, Donegal County Council and the Special EU Programmes Body for funding the project through the Peace IV programme.”

The project is funded under priority 1 of the Peace IV programme, promoting peace and reconciliation and under action 4.1 of the local authority peace plan which focuses on the promotion of positive relations at a local and regional level, characterised by respect and where cultural diversity is celebrated and people can live, learn and socialise together, free from prejudice, hate and intolerance. Match-funding has been provided by the Executive Office in Northern Ireland and the Department of Rural and Community Development in Ireland. 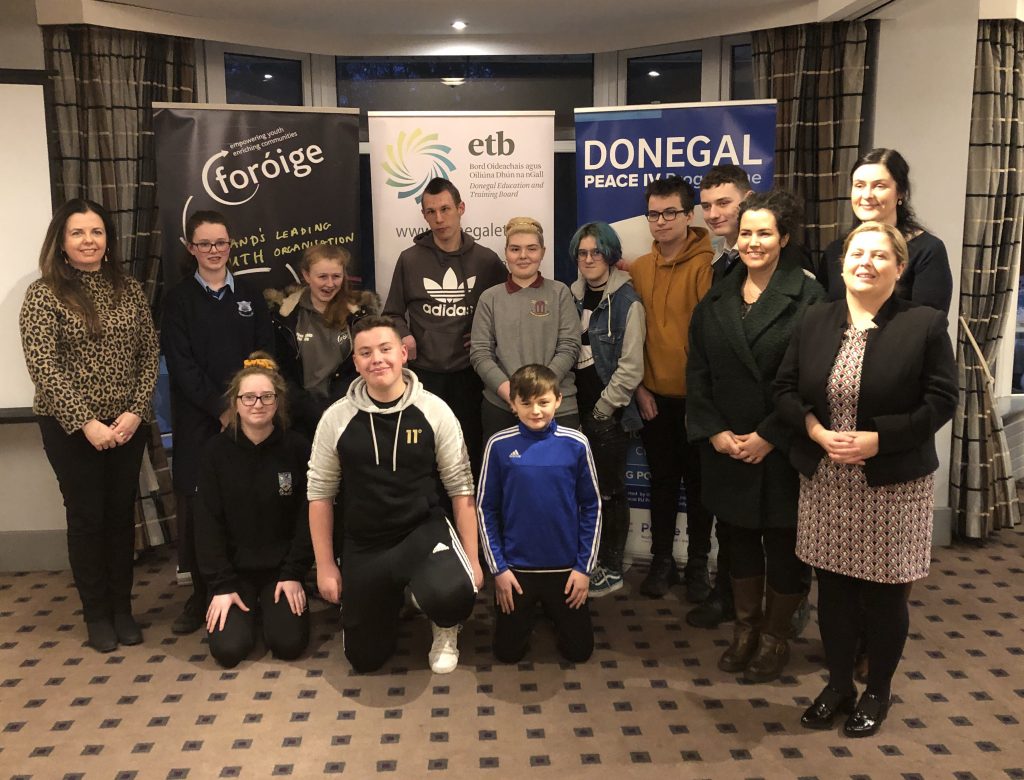 Donegal ETB project coordinator, Dr Sandra Buchanan noted, “This video is absolutely brilliant. Restorative practices is not an easy concept to understand and this video presents an understanding that’s clear, that’s easy to grasp and that basically explains the concept outline in a nutshell. It is such a useful resource for introducing this topic to young people and adults.”

Donegal County Council Peace IV Programme Co-ordinator, Caroline McCleary, congratulating the young people remarked how she was delighted to see this video, “Peace emanates from conflict and as we put these projects together we can see that we’ve moved on from some of that conflict.  It gives me great pleasure to see projects like this rolled out that involve young people and I hope that the new skills they have learned will help them as they go through life.”

The restorative practices project seeks to improve positive relationships between and for young people, staff, parents/guardians, volunteers, train participants in accredited and non-accredited approaches to Restorative Practices and to develop an understanding of alternative ways of dealing with conflict.