The Bridge Bar has been in the Mackey family since 1988 and became one of the most popular venues in Donegal for live music. 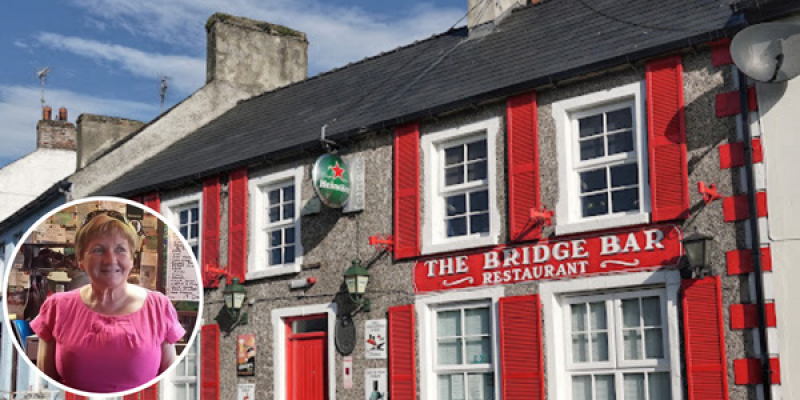 Breege Mackey (insert) was the proprietor of The Bridge Bar in Ramelton.

Popular Ramelton publican Breege Mackey will be laid to rest on Friday.

Breege, the proprietor of The Bridge Bar, died on Tuesday night at Letterkenny University Hospital and tributes have poured in.

Breege and her husband, Jose, took over the running of The Bridge Bar in July 1988 and the venue became one of Donegal’s best known live music venues.

The addition of the restaurant to The Bridge Bar in 1995 added another string to the bow.

Some big names regularly graced the stage at The Bridge Bar, among them Henry McCullagh, who played alongside Paul McCartney, Brian Kennedy and Frances Black.

Breege hailed from Carrowkeel, Hollymount in County Mayo and moved to Donegal in the 1980s, working initially at the Post Office in Letterkenny before dipping her toes into the pub game.

The swift and sustained success of The Bridge Bar was a testament to the vision she and Jose had in the early days.

In recent years, The Bridge Bar has been managed by their son, Gavin.

Announcing the passing of Breege, The Bridge Bar said she would be ‘sorely missed by her family, staff, customers and everyone in the community.’

As a mark of respect, Conway’s Bar in Ramelton cancelled their bluegrass session on Wednesday night.

Breege, late of Melmac, Back Road, Ramelton, was predeceased by her husband Jose and her parents, Patrick and Una Mellett.

Breege’s funeral mass takes place on Friday at 11am in St Mary’s Church, Ramelton with burial afterwards in the adjoining cemetery.