Any Donegal people interested in living in a stunning castle at the other end of the country? This stunning and carefully restored 15th/16th century tower house is positioned in a hidden setting on a discreet wooded 20- acre estate.

The three-bedroom detached property in Clare is a lot smaller than your average castle. 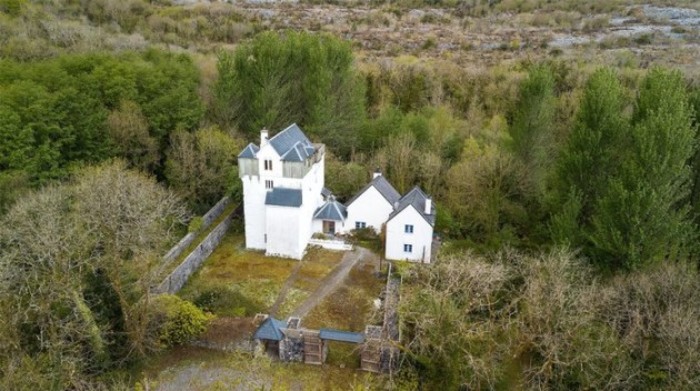 The castle in Ballyvaughan in the Burren area is for sale for €695,000.

The property is carefully concealed from the road at the bottom of the Corkscrew Hill across the road from the famous Gregan's Castle Hotel, which shares the same name.

This is a stunning setting surrounded by the Burren in North Clare and within a few kilometres of Ballyvaughan Village on Galway bay.

The property is within easy access of the world-famous Lahinch Golf course, Lisdoonvarna, the Cliffs of Moher, Kinvarra, The Flaggy Shore, Doolin, the Aran Islands and only an hour from both Galway city and Shannon Airport.

The tower house castle was added to carefully by the current owners in recent times with an adjacent cottage.

The cottage has been seamlessly integrated to the main building and they are both surrounded by a bawn wall around the perimeter.

The cottage consists of a large open plan kitchen dining area with a mezzanine sleeping area above. There is a cosy living area just off the kitchen. The cottage includes a master bedroom with an ensuite bathroom.

The castle itself has a separate entrance to the left. The entrance hall also acts as a utility area with an overhead trap door to a vaulted Bedroom/ Office with its own stairs.

To the left of the entrance hall is a bathroom with bath, WC and WHB and a stairs to bedroom 2 on the first level.

There is a separate stairway to the great hall on the second level which has an attractive stove and a vaulted ceiling. There is a WC and Kitchen area just to off the hall to one side.

There is a further spiral staircase to the next level and to the third bedroom, with access to the battlements.

The grounds have been carefully cultivated and are a maze of gorgeous walks where the castle regularly appears and disappears into the woodland. This is a haven for wildlife and peace.

In the second half of the seventeenth-century parts of the bawn walls were breached by Cromwellian soldiers, they remained unrepaired for over three hundred years until the property came into the ownership of the vendors, who set about the mammoth task of repair and regeneration.

The Castle itself dates from 1588, replacing an earlier thirteenth-century building. Records show that by the sixteenth-century the property was owned by the O'Loughlin family.

The joint agents for the sale are Helen Cassidy and Premier Properties.