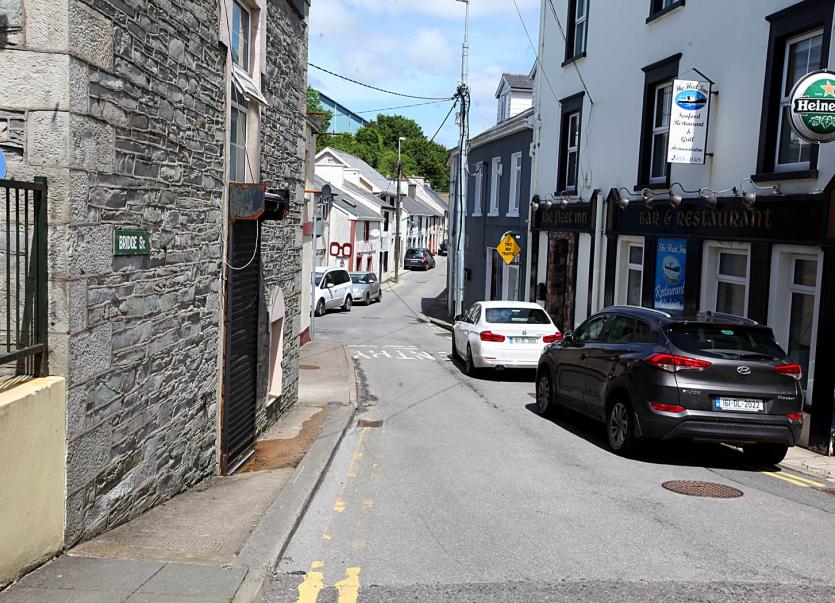 Plans to introduce a one-way system on Bridge Street, which is believed to be one of the oldest continuously inhabited streets in Donegal, has divided opinion in Killybegs PICTURE: THOMAS GALLAGHER

Two prominent politicians have opposing views on plans to make one of the oldest streets in the county one-way.
Plans by Donegal County Council to make Bridge Street in Killybegs one-way have been opposed by some local businesses.
Local independent TD Thomas Pringle, who has his constituency office on the street, has also voiced his opposition saying the proposals are unnecessary. But local independent councillor Niamh Kennedy, who topped the poll in last year’s local election in the Donegal electoral area, says the plans are essential to the development of the area.
The proposals to make Bridge Street one-way from the old fire station to the junction at the other end of the street include the widening of footpaths.
The street is close to Niall Mór National School and the Niall Mór Community Child Care Centre.

Safety
Donegal County Council says the plans will improve traffic flow and pedestrian safety on the street which is occupied by homes and around 15 businesses.
The proposals were put out for public consultation, which closed on February 28.
Submissions opposed to the one-way system have been made by some local businesses who fear they will impact negatively on them.
The submissions on the proposals are to be presented to councillors in a report, probably at the April meeting of the Donegal Municipal District.

'Not consulted'
Deputy Pringle, who has had an office on the street for more than 14 years, said local businesses were not consulted about the plans and there is no need to change the traffic flow on the street.
He said the proposals would increase congestion close to the national school and the childcare facility and at times when the local church is being used.
“Basically I think this proposal is going to create more problems than it will solve and I don’t believe it is the way to go,” he said.
Cllr Kennedy said the proposals are part of plans for the area that include turning the old council yard into a car park.
She said the majority of businesses and residents on the street and in the area do not oppose the plans.
“If someone is not in favour of it, they will put in an objection or a submission. And if someone is in favour they tend not to bother (making a submission) or they are quite happy not to,” she said.
“We need to free up traffic flow and make sure there is safety for children going to and from the school and make sure that is addressed.”
Local businesses fear the plans will cause inconvenience for customers due to a lack of parking and added congestion in the area.
Donegal Refrigeration Limited has been operating from the street for 40 years and has two premises there. Grainne Cafferty, who runs the business with her husband Sean, said the plans will add to congestion in the area.
“The businesses on Bridge Street are worried and anxious that they are going to lose their customers. Inconvenience costs customers,” she said.
The plans had come “out of the blue” and businesses were not consulted, she said.
“This is an artery off the Main Street and it takes the pressure of traffic from the Main Street. It has been there for how long and it has been working.”
Shauna Cooney of Skinderella’s Beauty and Reflexology Clinic is also concerned about the impact of the proposals.
“The one-way system will have a serious effect on my business,” she said.