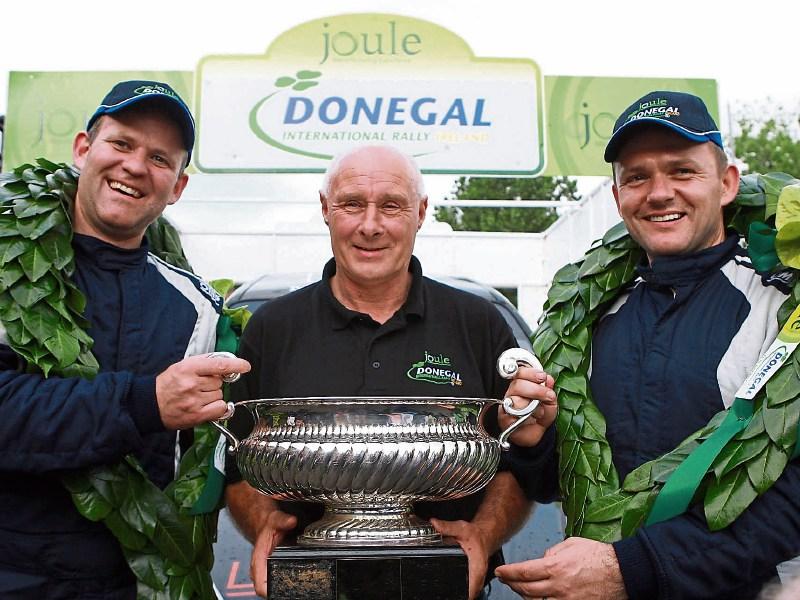 Manus and Donall with clerk of the course, Eamonn McGee, and the Jim Kennedy Perpetual Trophy

Last year, it was an emotional Manus Kelly who climbed out of his Subaru Impreza WRC at the finish ramp on the third Sunday in June.

Manus Kelly and his co-driver, Donall Barrett have proved that they can win it any way.

In 2015, a year after a bad accident on day two which saw Manus close to packing the whole thing it, such was the impact it had on him, the pair won the national championship in Donegal.

Last year, the duo showed nerves of steel to come from behind to take the overall title on the very last stage in Fanad Head by half a second from Keith Cronin and Mikie Galvin.

Yesterday, the final run up the home stretch might not just have been as nervy as 2016. But judging by the look of the pair, it was every bit as adrenaline-filled as they went for glory once more. Success stories don't come much better than Manus Kelly and Donall Barrett - two honourable and affable individuals whose ability to click when the watch starts has been crucial in their rise to stardom.

“It's getting to be a nice habit,” Manus said as he took it all in after being presented with the Jim Kennedy Perpetual Trophy outside the Mount Errigal Hotel.

“It's just the stuff of dreams,” he told the Donegal Democrat.

“It was very satisfying the way we won it this year. We fought every inch of the way from Friday morning to Sunday evening. We went to to toe and to come out on top after that makes it really special and hugely rewarding,” he added.

Everywhere he turned, one of his own was there to shake a hand, wave a fist, offer a handshake or share a warm embrace. They had come in from the Glen, young and old, to be with him in his finest hour yet.

Six times Donegal champion, Andrew Nesbitt, the people's favourite for so long around these parts, had a massive congratulations for the local man whose rise seems to know no limits.

“We prepared well for this event and knew questions would be asked of us at certain times. The plan throughout was to stay positive at all times," Manus said.

To win last year was something special, but to retain the title is class - just class.”

“There's a massive team behind this success and everyone in that team played a crucial role.”

Yesterday, Manus Kelly became only the eighth driver in the history of the Donegal International Rally to notch up back to back wins.