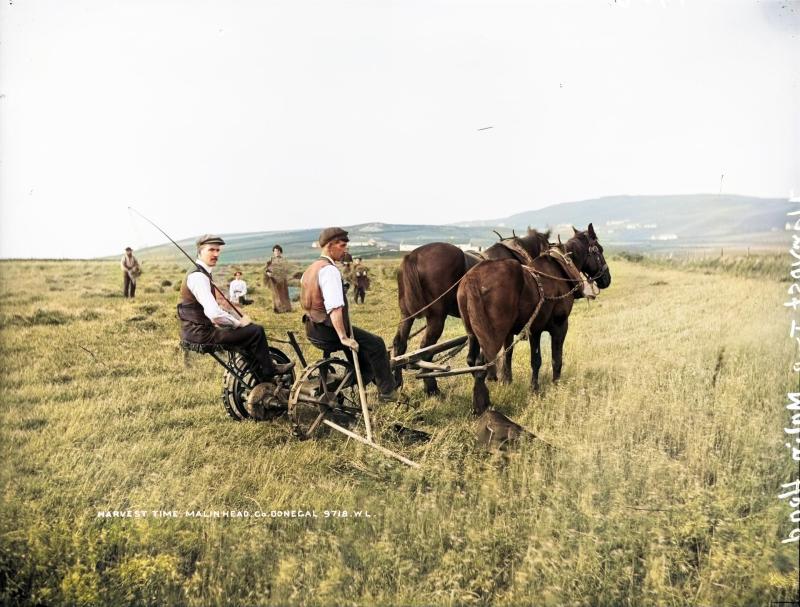 John Breslin is a Personal Professor (Personal Chair) in Electronic Engineering at the College of Science and Engineering at the National University of Ireland Galway, where he is Director of the TechInnovate / AgInnovate programmes.
John has taught electronic engineering, computer science, innovation and entrepreneurship topics during the past two decades and is one of the most respected scholars within his field.
Unrelated to this, he began colourising some old photos of Ireland during the summer, starting about five or six months ago.
He told DonegalLive.ie: “I was trying to colourise a photograph of my grandmother Rose [Boyle] Breslin from Glenties, but it was taking ages to colour it in Photoshop by hand.

Then I discovered that there was this newly developed AI-based system called DeOldify that could be used to colourise photos automatically.
Explaining his Donegal roots he added:
“I’ve been doing some genealogy research recently and the Breslins hailed from near Killybegs originally, with my great-grandfather - after he trained in Glasgow in the 1870s - moving to Glenties and becoming the workhouse master there. His son, Allie, was a local postman, and my own dad James was born in Glenties. My grandmother Rose’s uncle was Hugh O’Donnell who wrote the “Rose of Arranmore”, and their ancestors apparently came from Arranmore too.” 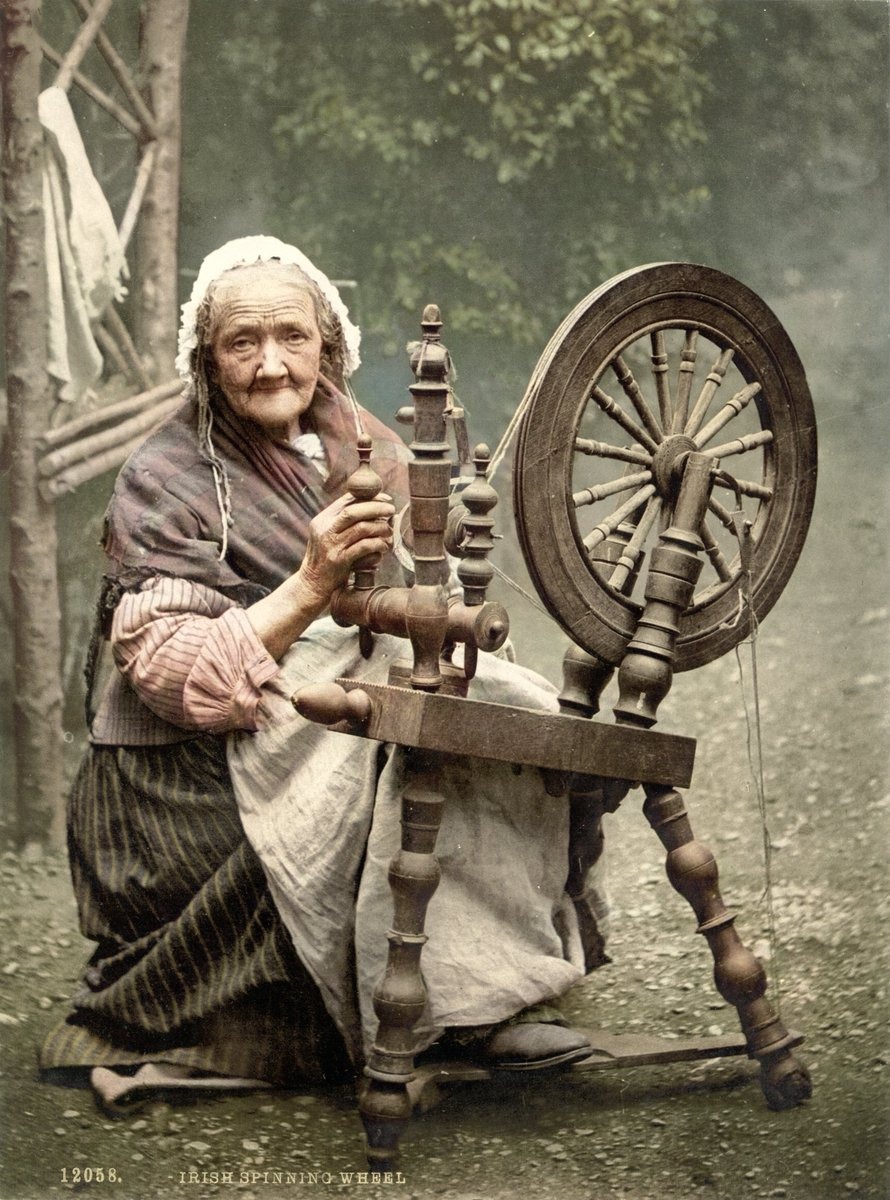 An example of John Breslin's work with DeOldify

1) How did you get interested in old photographs?
I got interested in this through some research I was doing into my Donegal/Clare family tree (I’ve also written a short guide on how to do this here). As part of this research, I started trying to colourise old family photos of my grandparents. It was taking a long time to do this manually in Photoshop, and then I happened across an automated colourisation system that had just been developed called DeOldify. After seeing the transformative effect it had on my family photos once I’d colourised them, I thought it would be interesting to try it out on other old photographs of NUI Galway, and then Galway/Connemara, and then Ireland as a whole.

2) Where do you get the photographs?
I try and use either public domain or Creative Commons photos as much as possible. There
are some fantastic national resources available, including the National Folklore Collection or Dúchas, the National Library of Ireland, and then many of our county libraries have parts of their own photo archives online too. There are also great international sources like the Library of Congress and Wikimedia Commons with loads of old Irish photos.

3) When did you set up the project?
I had been colourising photographs since May but I’ve only started sharing them out as Old Ireland in Colour since August 30th.

4) Is the system actually located in NUI Galway?
Most of the source photos are digital and online at various archives and collections, so the originals are sourced from multiple locations, colourised, and then both versions (and any intermediates) are stored together on a computer at the University.

5) Approximately how many photographs have you colourised?
So far I’ve shared over 400 photos through Old Ireland in Colour, but the eventual aim is to
use the computer to colourise large swathes (hundreds and thousands) of black and white photos at a time from various online archives. It’s not just photos that can be colourised.
I’ve done some videos too using DeOldify, including a promotional movie on Northern Ireland’s contribution to the British war effort recorded in the 1940s, a video about Canadian soldiers writing home during WW2 which has some great shots of Donegal and Derry, and the full 1h30m movie “Knocknagow” from 1918, which was produced by the Film Company of
Ireland.

6) Are you continuously adding to it?
Yes, at least a photo a day! It’s amazing what you will find if you look for new sources, and people constantly send suggestions too. The Sean Sexton Collection (not online) was brought to my attention this week: there are some incredible photos in that collection of post-famine Irish people. I also enjoy taking old stereographs and colourising those, because you can use the left and right photos and morph them into an animation.
Stereographs or stereoviews date back to the late 19th century, where two separate photographs were taken by cameras in slightly different positions but pointing at the same objects.
A special viewer (basically a set of spectacles mounted on a stick with a holder for the stereograph photo card at the end) allowed you to view the scene with a sort of 3D effect. They were very popular with Irish emigrants who could reminisce on home.
We can now take those scenes and, using a deep learning (artificial intelligence) algorithm called torch-warp, morph between the two pictures, to create a short movie with what looks like movement.
I also did this for some colourised photos from Dúchas of Peig and Tomás Ó Criomhthain that were taken moments apart, and the effect is quite compelling.

7) Is the addition of colour done by a computer?
Yes, I mainly use an open source deep learning (artificial intelligence) framework called DeOldify by Jason Antic. I was fortunate enough to meet Jason and his collaborator Dana Kelley (both of whom have some Irish heritage coincidentally) in San Diego this summer, where we had a great chat about all things related to DeOldify and colourisation.
There are some tweaks required to photos either before or post colourisation, but in general the heavy lifting is done by the computer.
There are also some commercial frameworks that make use of DeOldify, and produce slightly different effects depending on their implementation. 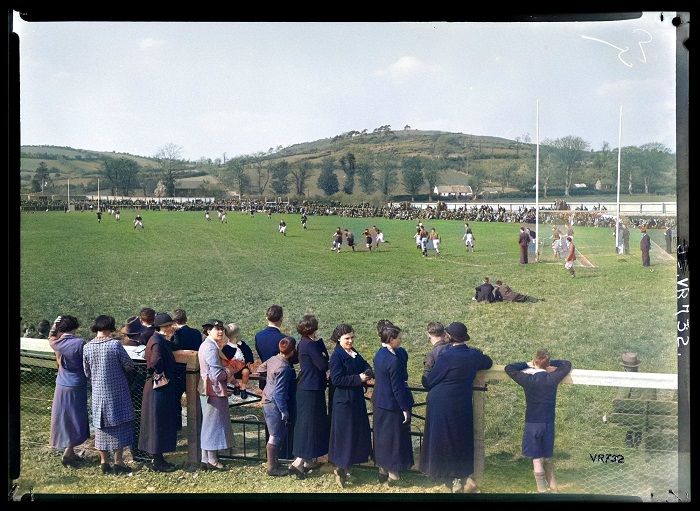 8) How can we be sure that the colours are accurate/natural?
This system works by learning what colours should be applied to different textures, shapes and objects in B&W photos from a large bank of millions of colour images that it trains on.
A fairly powerful computer with a GPU (graphics processing unit) is usually required to do this training.
If you trained on a different image bank, you could get slightly different results in the resulting colourised image. So the accuracy is only as good as what is normally expected for a certain type of texture/shape encountered in the image bank.
Grass, trees, the sea, usually come out perfectly. Roofs sometimes (not always) come out with the wrong colour tiles.
Occasionally, clothes come out in navy or purple or some other colour whereas in reality you know that they should be a particular hue. In those cases, all you can do is carry out some post processing where you touch up or manually adjust that colour. Most photos are okay because you don’t know if someone was wearing navy or brown, but there are specific incidences where there is either a historical record or some human knowledge that the colour just isn’t right. I’ve manually changed a Capuchin monk’s robe from navy to brown,
Countess Markiewicz’s uniform from navy purple to bottle green, some Connemara/Claddagh women’s shawls/cloaks to red, and Tom Crean’s woolen jumper to
any colour but lilac.
The most common change is where I have to manually touch up an ear, arm or leg that wasn’t colourised for some reason.
I think of this as being a bit like a Wikipedia page. It’s the first of many iterations of the colourisation of a particular photo that will continue to improve as processes, models and training improve and as you can reference relevant sources for great historical accuracy.

9) Have you had much of a response to what you've shown so far?
The response has been quite phenomenal for many reasons: the amount of views, shares likes, follows, and comments in such a short period of time (Old Ireland in Colour has gained over 15,000 followers across platforms in the ten or eleven weeks since it kicked off, with millions of photo/video views), but also for the messages from family members of those whose photos I’ve colourised: grandchildren or great-grandchildren (e.g. Cian Ó Ciobháin and his great-grandfather, this woman and her great-grandmother, Michael Davitt and his great-grandson in politics), distant relatives, and more. The difference in emotional respons one gets from a photo in colour as opposed to its black and white counterpart can be quite significant, and a lot of these photos have resonated with the audience in ways that they otherwise would not have.
There has been such positive feedback and so many people saying that this is their new favourite social media account to follow.
It’s very encouraging.