The Pattersons - from the Fiesta to the Albert Hall

Frank Galligan speaks to Billy Patterson on his new book, and his memories of life on the road with The Pattersons 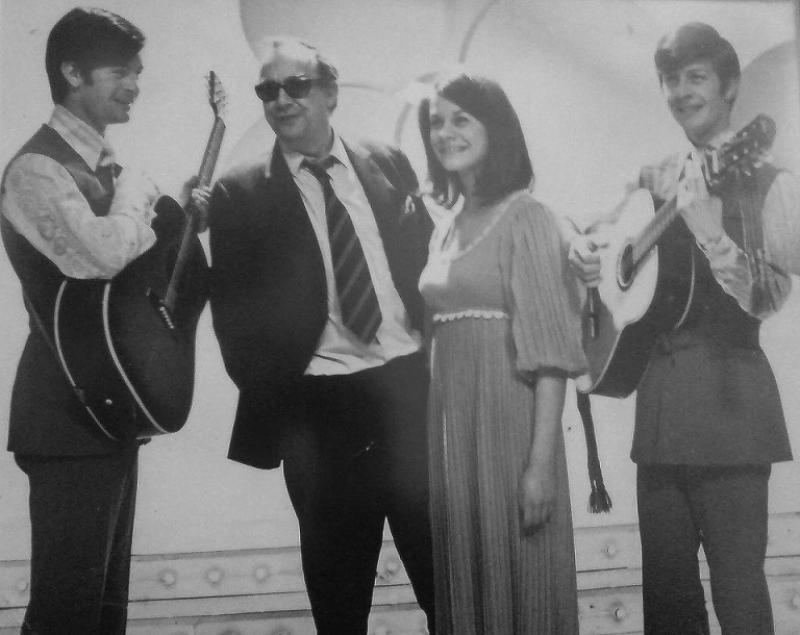 MIXING WITH THE STARS: The Pattersons, including Billy on the left, with Eric Morecambe

When I met up with Billy Patterson, he had just celebrated his 78th birthday...and still looks as fresh as the young folk troubadour who entertained us in the 1960’s and 1970’s.
Recently, he published his first novel, “Robert’s War”, which deals with ‘Robert’ from the town of Portallan in Donegal in the 1970’s, who is trying to deal with an increase in anti-social activity, brought about by a minority of hooligans fleeing the Troubles in the North.
William Matthew Patterson was born in the Station House in Raphoe on November 17, 1941, to Matt and Chris Patterson. He had two brothers and two sisters, but sadly, Alan passed away at 3 months old.
His other siblings, Dorothy, Ronnie and Christine, would in time be part of the very successful folk group, ‘The Pattersons’. 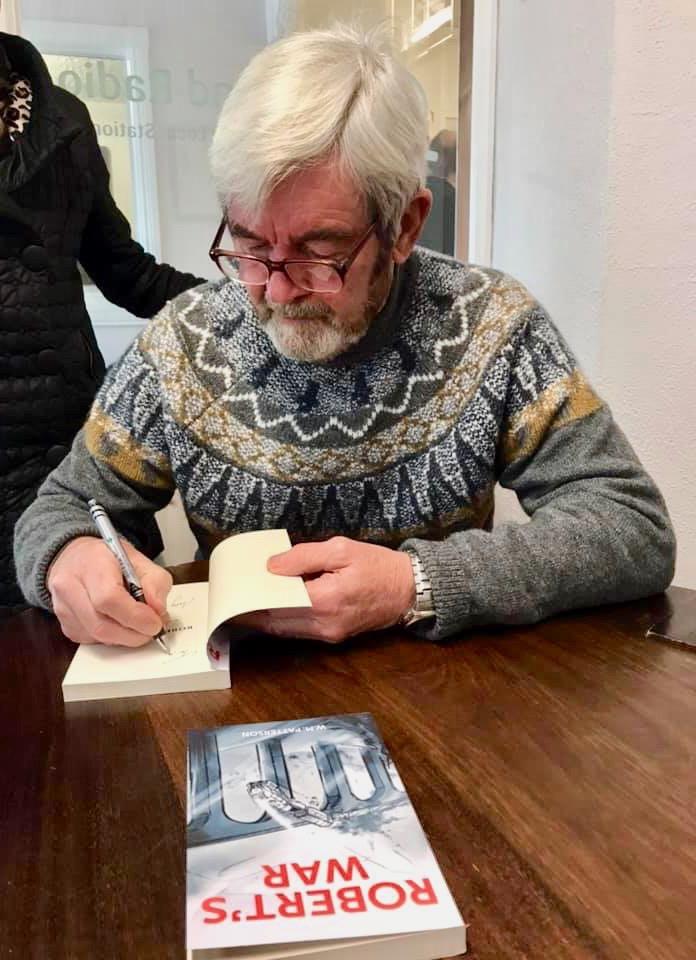 “It all began in Letterkenny in the early 1960’s,” Billy recalls, “the legendary Letterkenny singer, Tommy Fletcher, was singing ‘Mother Machree’ on a fledgling RTÉ TV show and we were watching it in Danny McGlinchey’s house in Gortlee. Canon Mulreany was there and asked me to take over my guitar and sing a few songs.
“We did, he was impressed, and he then requested us to appear in the Fiesta Ballroom that October. We did it for nothing.” Billy laughs . . . “four Prods and no pay!”
However, there were major compensations. On the bill in the Fiesta was well known Dublin comic and actor, John Molloy.
“He liked what he heard, asked us to learn a few sea shanty songs, and invited us to appear in a well known Dublin theatre.”
As a result of this, they were booked on three RTÉ shows, and in the meantime, Paddy McGlinchey, Danny’s father, had entered them in the acclaimed Kilkenny Beer Festival.
“We came 4th, which was very credible, but more significantly, Gordon Weller from the ski resort of Veil in Colorado, was there and he said we were the type of group he was looking for as part of his “The Sound of Ireland Festival”.

Wonderful time
“We spent five and a half weeks there, and had a wonderful time...a real Rock and Roll lifestyle! Anytime we had to renew our Visas, Mark Hogan, a proud Irish-American, and Lieutenant Governor of Colorado, sorted it out, and in total, we were some six months in the States.
“We auditioned in Vegas but we were not ready for them and they were not ready for us!” Billy laughs.
One consolation was being invited to the Pizazz Festival in Vegas in 1967, and sitting beside Elvis, Sammy Davis Junior and other stars.
“Elvis signed the front and back of my programme, I chatted with Sammy and although I didn’t meet him, Joe Louis, the great Heavyweight Champion was there too.”
By 1968, they were back in Donegal and considering giving it all up.
“We were sitting in the house in Gortlee chewing the fat about it, when a car pulled up outside. It was a producer from the BBC in Belfast who was horrified at our plans, and said he needed us for seven shows for the Beeb!”The rest is history.
In the meantime, the famous BBC producer John Ammonds was contacted directly by the inimitable Danny McGlinchey, and he was persuaded to come to an audition in Rathmullan House. He was seriously impressed, and booked them for the Morecambe and Wise Show, after which Eric Morecambe said: “Keep them for the season!”
Fellow stars included Lulu and Nana Mouskouri, who asked them to record an Irish song with her. They did ‘Baidin Fheilimi’.
They toured with Val Doonican and other stars, played in the Albert Hall, and on one famous Saturday night, they appeared on all three major networks, RTÉ, UTV and BBC, something no other artistes have ever achieved.
In October 1968, they released their second single, “I Don’t Want to Be A Memory” which became a major hit, reaching number 2 in the Irish charts.
When their new album came out in June, 1969, Dorothy got married and decided she could not raise a family and stay on the road. She announced she was leaving the group.
The remaining siblings were unsure what to do next. Said Billy at the time, “When Dorothy decided to go we did quite a bit of heart searching as to whether we should call the whole lot off, continue as a threesome, or bring in someone new.”

Continued
Fortunately for their fans, they continued as a threesome and, all in all, had almost seven successful years on the road.
After one more album in 1970, ‘I Can Fly’, the group switched from CBS to the newly formed Mam Records. The label was formed by Manager Gordon Mills and Tom Jones and featured stars like Engelbert Humperdinck and Gilbert O'Sullivan.
In an interview in ‘Spotlight’ magazine in 1970, Chrstine said: “The fact that we never stay long away from home helps keep our feet firmly on the ground. Getting back to Letterkenny within hours of sampling some of the glamour of London show business is a marvelous way of keeping things in perspective.”
Their last appearance was on the Late Late Show in 1974. “We had appeared with Gay a few times, he was very good to us”... and that in effect was that.
‘The Pattersons At Home’ was their last album in late 1974.
“My youngest Ciara was 7 and asked me where I was going one day. I said Tipperary… ‘Are you from Tipperary, Daddy?’ She responded. That was a tipping point” .
Although Dorothy returned to play with them at RTÉ’s 21st and 25th anniversary celebrations, sadly she passed away in 2009.
As Billy recalls, “It was heartbreaking, a big wrench for all of us.”
He immersed himself in Gilbert and Sullivan operas with the then Letterkenny Choral Society, both as a performer and producer of many musicals, and in the late 1980’s, along with Packie Keeney, Kevin McIntyre and others, began considering the merits of local radio.
Appropriately, I met Billy in Highland Radio, of which he was a founding member and MD on a number of occasions.
He still broadcasts and firmly believes in the medium.
“Our first consideration must be radio for the people,” he said.
“ Obviously business considerations are important, but informing and entertaining the public is paramount.”
He has three daughters from his first marriage, Ciara, Jacqueline and Lizzie. He is now married to Carmel Gallagher and they have three children, Aran, Iona and Adam.
Like his protagonist in the novel, Robert, Billy is not the kind of person (to quote another Laggan man) who calls a spade ‘a long-shafted agricultural instrument’...he is refreshingly direct, compassionate and ‘nae shortage of craic in him’.
The Pattersons’ biggest hit includes the lines: “I don’t want to be a memory, oh no...not an echo of the past…”
Well, they most certainly did Donegal proud, and Billy and his siblings - who were once described as “The Irish Von Trapp” family, have ensured that they will remain an integral part of our folk memories here...real musical echoes from a past well worth cherishing.