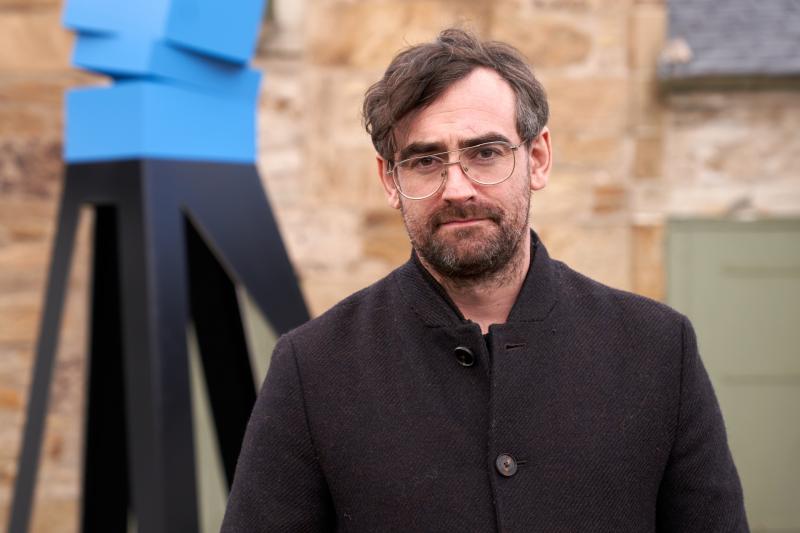 Kevin Callaghan talks to journalist Siobhán McNamara about overcoming obstacles to pursue his passion; society's re-engagement with creativity during lockdown; and his plans to return to Donegal

Donegal artist Kevin Callaghan is set to feature on the Sky Arts series Landmark, as one of 18 UK-based artists commissioned to create a piece of public art.

This is a fantastic achievement for the Barnesmore native, especially as his  road to success hasn’t been without its obstacles. His passion, tenacity and absolute dedication to his art drove him forward on a career path that sees him firmly established as an esteemed ceramics artist, and now also as a sculptor.

Mr Callaghan’s story is a reminder to people - especially young adults who may have been disappointed with their recent Leaving Cert results - that there is always more than one way to achieve their goals.

The 39-year-old artist is currently based in Glasgow. He will be representing Scotland in the Sky Landmark series which sees 18 artists across the UK (three from each region) produce a piece of sculpture in just 14 days.

The new show is fronted by Gemma Cairney, and part of its remit is to take a wider look at the purpose and power of public art as she joins Sky Arts on a mission to create the UK’s next major landmark.

Ms Cairney is joined by two expert judges – curator Clare Lilley and visual artist Hetain Patel – as well as six famous faces, all of them ready to root out the best artistic talent in the region or nation they call home

As part of the series, Sky Arts is investing £700,000 in public art in total, commissioning the 18 brand new pieces of public art around the country as well as a final national landmark worth £250,000.

For Kevin Callaghan, this represents an opportunity to further develop as a sculptor and to bring his art to a wider audience. He is also embracing the spirit of celebrating the world of art in which he is deeply immersed.

His own journey in developing as an artist and building a career in a sector where it is notoriously difficult to make a living is inspiring.

The former Abbey Vocational School student always knew that he wanted to be an artist. But having prepared a piece of work in wax for his Leaving Cert which he was then told couldn’t be submitted, he  failed honours Art, despite his skill in the subject.

And that wasn’t his only challenge.

“I struggled with fairly bad dyslexia all the way through,” he told the Donegal Democrat.

Undeterred by his Leaving Cert result, Mr Callaghan looked at other routes.

“I managed to secure a place on a two-year Art and Design course in Derry, in what is now the North West Regional College,” he said.

After completing the course in Derry, he spent six months travelling in Asia. On his return, he attended Coláiste Stiofáin Naofa in Cork for a year, followed by a two-year course in the Crawford College of Art and Design.

After spending a few years in London, Mr Callaghan moved to Glasgow. Now firmly established, he exhibits nationally and internationally, showing at the Dublin Castle, The London Art Fair and the Saatchi Gallery with Cynthia Corbett and the Young Masters Art Prize, the Victoria and Albert Museum ‘What is Luxury’ with Unknown Fields Division and Toby Smith.

Other shows include GLOBALE: Infosphere”ZKM Museum, Karlsruhe, Germany and Van Abbe-museum, Eindhoven. He was selected to represent Ireland in The Ceramic Context Biennale in Bornholm Art Museum in 2018

His piece commissioned by Sky Arts for the Landmark series is called ‘Are We Here.’

It is a 4.6m tall sculpture which Mr Callaghan says explores the notion of utopia and our proximity to it.

With an ongoing interest in geometry and the potential for multiple realities, the artist invites viewers into a future-minded meditation on hope and potentiality via Are We Here.

The artist also spurs us to ask the titular question, ‘Are we here?

It is a question that suggests we are on a journey, and, in addition to hunger for our destination, conjures hope - hope for real freedom and space to realise our multitude of potentialities. If ‘here’ is not yet utopia, it is at least a space where we might imagine, hope for, and build our future.

Utopia and potentiality have permeated this artist’s practice, which spans ceramics, painting, photography, and installation. Are We Here is the progenitor of the artist’s new series of sculptural interrogations of space and form; and, as the first and largest of this endeavor, Are We Here punctuates Mr Callaghan’s work and represents a turning point onto new possibilities.

The Sky Arts Landmark series and its exploration of the importance of public art comes at a time when many people have re-engaged with creativity. The enormous changes to life as we know it that came about as a result of the coronavirus led a lot of people to explore creativity, as appreciators of art or as practitioners, from online music lessons to taking up painting or creative writing.

Mr Callaghan is delighted to see how so many people in society turned to art at a time of crisis.

“People are more in touch with creativity now,” he said. “It has been very interesting to see how people are going back to their creative selves. I find that fascinating.”

Indeed, art in all its forms has been part of how people were able to process the trauma of the last year and a half.

Mr Callaghan said: “It is great to see people thriving again and re-evaluating their lives, realising how important being creative is in whatever capacity, be it something they do for themselves or as a way of making a living, as a business.”

He says that a lot of people don’t see art as a business, but it can be, and it is a very worthwhile one. However, it is not an easy road.

“You are battling away on a very complex route when you are trying to make a living out of art,” he said. “It is very difficult. People don’t realise how complicated it is but you believe in what you do and you hold on to that.”

There are supports available through local enterprise boards and other such organisations.

Mr Callaghan is hoping to move home to Donegal and is currently renovating a studio from an outbuilding on family land.

While some of his work will still be in the UK, there is one particular element of moving home that he is really looking forward to.

“It will be nice to be able to get out of bed, make a cup of coffee and walk over to the studio instead of having to travel all the way across town,” he said.