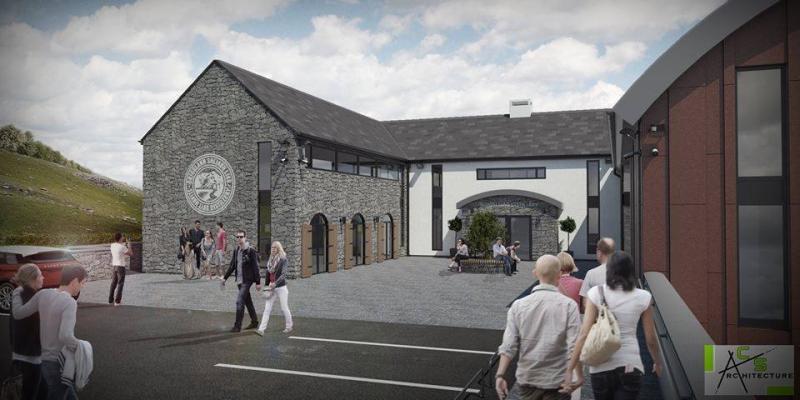 An artist's impression of the planned distillery at Carrick

Donegal's first whiskey distillery has been given the go ahead by An Bord Pleanála.

The planning board has upheld Donegal County Council's decision to grant full planning permission for Sliabh Liag Distillery in Carrick.

In its decision, signed off on January 4th, the board said it was satisfied that the planned development addressed concerns about the scale of the project, road safety and site drainage, and that the concerns raised "did not warrant refusal" of planning permission. The board also revised some of the conditions relating to the planning permission.

Sliabh Liag Distillery launched The Silkie, a blended Irish whiskey, in 2016 and commissioned its An Dúlamán gin operation at the turn of the year. The completed distillery will produce whiskey, gin and poitín at the Bull Field, Clogher, Carrick.

“This is a momentous day for the area and brings the goal of reclaiming the distilling heritage of Donegal another
step closer," said James Doherty, Managing Director. "The distillery will be a real boost for employment and tourism in the area.

"We will continue the development of The Silkie and launch An Dúlamán, Irish Maritime Gin in the coming months while we further develop the distillery plans," he added.

Gavin Shovelin of Corner Stone Architecture said of the development, “This has been an interesting, challenging and unique project for our firm to be involved with, and significant research was required to proceed with the design stage.

"We have a great relationship with our clients, whose passion and commitment for this project was clear from the outset.

"It was important to us, and to our clients, that the design was sympathetic to the rural architecture of Donegal; retaining and enhancing the existing stone structures on site;taking full advantage of the spectacular views and integrating the new building into the landscape of the site."

Michael Hannigan of Corner Stone Architecture commented, “Following the appeal of the original grant of permission we prepared a comprehensive submission for An Bord Pleanála in conjunction with specialist consultants in which the merits of the proposal were highlighted and issues of concern addressed, which has led to this successful outcome. A real team effort."

“We are really grateful to the local communities who have been vocal and committed in their support, as well as to the
friends, professionals, TDs, local businesses and the parish councils who have stuck with us and offered their
support and advice," Mr Doherty concluded.