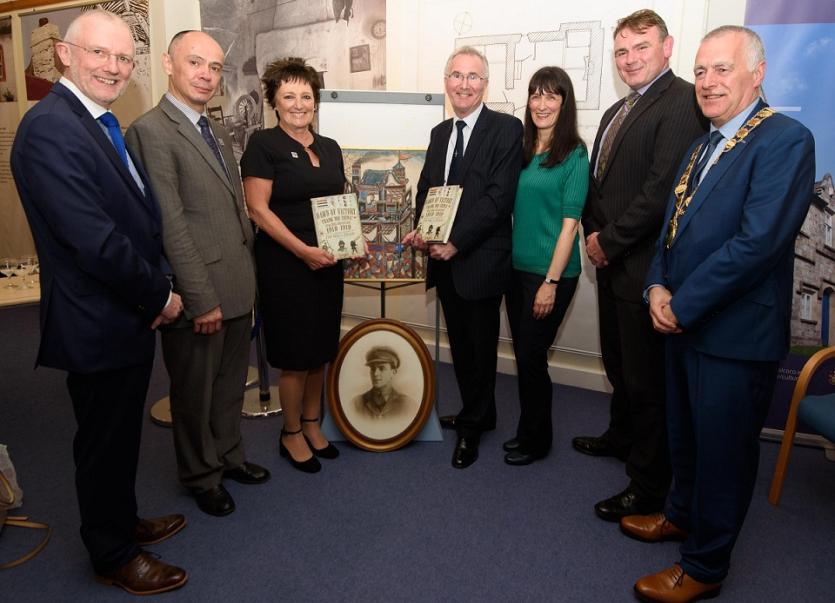 From the recent launch of the third volume of the late Jim Maultsaid's illustrated WWI diaries; see caption at bottom of page.

A veteran of World War I raised in Letterkenny has been praised for his detailed and insightful portrayal of the Chinese Labour Corps, whose significant contributions to the war have largely been airbrushed from history.

“Dawn of Victory … Thank you China! Star Shell Reflections, 1918-1919”, the third volume of the war diaries of the late Jim Maultsaid, was launched recently at the Donegal County Museum during Donegal Heritage Week.

”There is no other book which comes anywhere close to giving us the insight that this one does,” Steve Lau, chairperson of the Ensuring We Remember campaign, said.

Mr. Lau said, “I do believe that the book catapults us into a new area of understanding of the Chinese Labour Corps,” he said. The Ensuring We Remember campaign is seeking a national memorial in London to the men of the CLC.

The Chinese ambassador to Ireland, Dr. Yue Xiaoyong, was unable to attend the launch but sent a letter praising the book, calling it “inspiring and thought-provoking”.

In his letter, the ambassador said almost 20,000 members of the CLC lost their lives.

“For a century, their significant contribution to the restoration of peace in Europe and the world has gone largely unrecognized; very few people today have heard of the stories of the CLC. But there is a growing consensus that the Chinese labourers deserve more acknowledgement, more credit,” he said.

The ambassador wrote: “Browsing this book together with my Embassy colleagues, I have been deeply impressed by the humble but talented author’s passion for art as well as his compassionate, humanitarian spirit. He used simple, easy-to-read language to convey feelings and emotions. These pages illustratively and convincingly emanate his desire for peace and survival, as well as his respect for life and genuine love for his fellow human beings.”

Born in Pennsylvania in 1893 to Donegal parents, Jim was three when his family returned, settling in Letterkenny, across the road from where the county museum now sits.

He moved to Belfast at 18 to find work, and joined the British Army in 1914. He was badly wounded in the Battle of the Somme and left unfit for active service. On receipt of an officer’s commission, he returned to France to serve with the CLC, the workforce recruited to free troops for front-line duty by performing support and manual labour.

The book launch heard of prevailing attitudes at the time that sought to dehumanise Chinese people. Mr. Lau said the 102,000 Chinese labourers who received WWI medals were the only medal recipients whose medals carried their roll numbers, not names. There were 6.5 million British medals awarded during WWI, he said.

Mr. Lau played an archive recording of a British war veteran, then an old man, who spoke of Chinese labourers in ugly, racist terms. “He wasn't unusual,” Mr Lau said. “This would have been the prevailing attitude of the day.”

Contrast that with Mr. Maultsaid’s words, read by military historian Richard Doherty, who launched the book: “I hope I have succeeded in giving you an insight into the heart and soul of those great workers of 169 Company. Let me say I will never meet men of higher honesty, fair dealing, just, staunch and true.”

Mr. Maultsaid’s granddaughter, Barbara McClune of Belfast, saw to it that her grandfather’s diaries were published. Mr. Doherty said he was approached by the publishers, Pen and Sword Books, to assess whether they were worth publishing.

He said he reported back, “There’s not a book here – there are several books here. We can’t let this go.

”It absolutely is a fantastic piece of history. It’s a wonderful piece of humanity as well, as Steve has so rightly pointed out,” Mr. Doherty said. 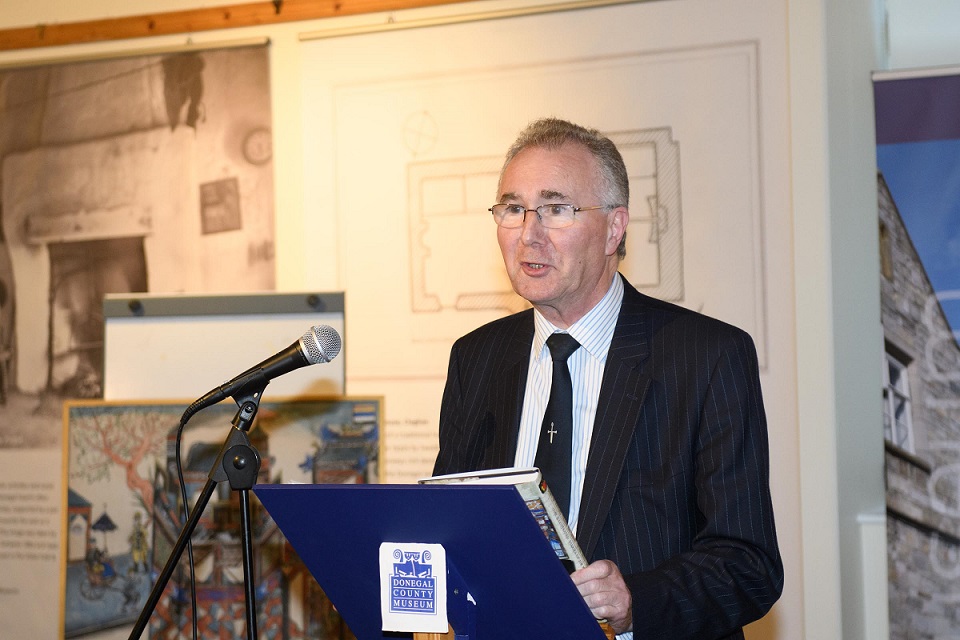 Barbara McClune’s brother, John Rosborough, told the launch that the work took his grandfather years to finish, and is filled with references to how much he respected the CLC workers under his command, “and this respect was mutual”.

The family also brought to the launch two pieces of art that were made for Mr Maultsaid by the men of the CLC. “It was a wonderful tribute indeed that I should be chosen for this supreme mark of affection,” Mr Maultsaid wrote in his diaries.

Addressing the launch, Cllr. Jimmy Kavanagh, Letterkenny Municipal District mayor, congratulated Barbara McClune for ensuring her grandfather’s diaries were published, “and made available for all of us to appreciate”. He said he also hoped the publication can help achieve the wider goal of the campaign to achieve recognition for the CLC, whose contributions to the war came at huge sacrifice.

The three volumes of diaries are published by Pen and Sword Books and available at Amazon. 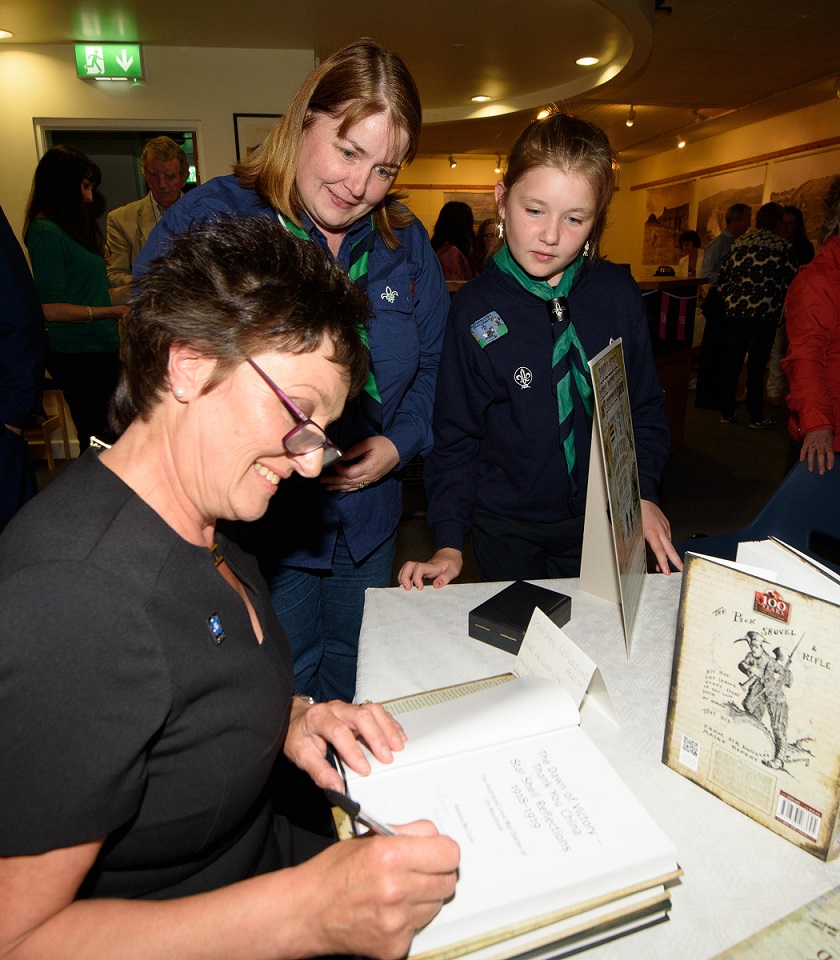 Barbara McClune, signing copies of the book for Nicola Taggart and Aoibheann Boyle at the launch. Photo Clive Wasson.