Michael Murphy knows them all! 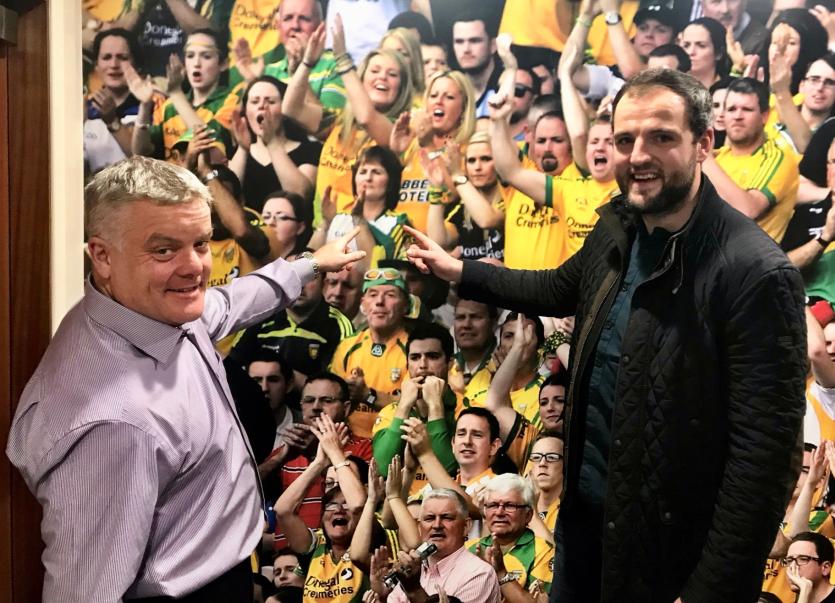 You never know who you might see at Supermac's in Donegal Town  - Michael Murphy along with Ken  Foley spots a great Donegal fan, Bernie Keeney on the massive Donegal mural at the Supermac's outlet which is being officially opened today. The Donegal captain could name practically everybody on the mural.

There are huge crowds of people at the Donegal Service Station Official Opening.

60 jobs have been created at the new Donegal Service Station that has been officially opened this afternoon by Donegal football star, Michael Murphy.

The new centre includes Donegal's 1st Supermac's, Papa John's and SuperSubs as well as a Londis, Top Oil and Bewley's. There will be face painting and balloon modelling as well games and giveaways.

Overall, an estimated 110 jobs were supported through the construction and staffing of the complex at Drumlonagher, outside Donegal Town and also includes a drive-thru facility, a retail convenience store, car and HGV fuelling pumps.

The owners of The Donegal Service Station, Ken and Dorothy Foley, who have brought up to 60 new jobs to the area, said that the outlet was proving very popular with customers. "Our customers have told us that the wide variety of services provided in the outlet are a good addition to what is already available in the Donegal Town," Ken said. "We are delighted to be part of the Supermac's family. The range of products on offer means that we can offer our customers a variety of choice on all our menus. With Supermac's and Papa John's there is something for everybody."