IT OCCURS TO ME: The importance of those Donegal sweaters to the Clancy brothers!

Remembering the time of the sweater craze 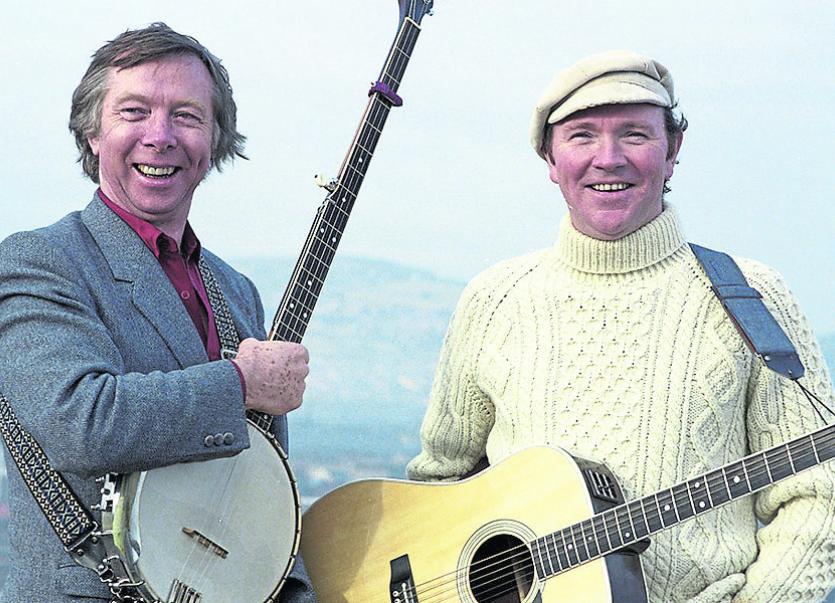 A few years before his death, Liam Clancy said in a TV documentary about the beginning of the Clancy Bros and Makem success story: “We came home after Christmas and my mother had knitted these sweaters. We brought them back and Marty (their manager) said: 'That's it!' You have to remember it was part of the business then. You had to have an identity. Marty insisted."
Liam added that much later, he received a letter from a knitwear manufacturer in Donegal who, by the mid-1960s, was preparing to emigrate. The sweater craze took off, and he was able to remain at home, marry the girl he loved and create a large family! I spoke with John Makem, Tommy’s nephew, earlier this week and he told me of an historic gig happening in Keady during Easter, and the background to it.
In August 1955, American song collector, Diane Guggenheim visited Ireland to record Irish folk songs. She chose the name Hamilton to disguise the fact that she was the daughter and heiress of millionaire Harry Frank Guggenheim, president of Newsday and onetime US ambassador to Cuba. Her maternal grandfather was Paul Morton, US Secretary of the Navy, while her maternal great-grandfather was Julius Sterling Morton, US Secretary of Agriculture.
After spending time in Carrick-on-Suir, Co Tipperary recording Mrs Joan Clancy, she travelled north to Keady to tap into Sarah Makem’s vast repertoire of folk songs. Liam and Bobby Clancy travelled with her, partly out of curiosity and partly to carry her heavy recording equipment. Her car was only parked at the Pound Bridge in Victoria Street for a few minutes when the news soon passed though the town that another song collector had arrived to record Sarah. American folk singer, Jean Ritchie, had been there the previous year.
These were the days when everyone’s house in the town was an open one and it was a normal experience for people to meander in and out. In no time at all, the Makem house was packed with neighbours, full of curiosity to view the visitors and to savour the whole recording experience. Diane was the first true born American, the first Jew and the first millionaire they had ever seen.
Local man Paddy ‘the Mate’ Cassidy held court at the front door and gave a running commentary to all passers-by. By the minute his account was becoming more and more embellished and soon Diane Hamilton was in fact the richest woman in America, her father was the Vice President and she needed ten men to carry her recording equipment. On occasions he meandered out across the road to tell car drivers to turn down the noise of the engine as a major recording project was being carried out and was being beamed live to Radio Luxemburg and the Soviet Union.
Three pipe-smokers sat on the window sill outside the house and tried to unravel Diane’s pedigree. “Her people came from Newtownhamilton.” said one. “Wrong.” said another, “She has connections in Hamiltonsbawn.” Pipe smoker number three spoke up “Yis are both wrong totally, that woman’s people come from a place called Manor Hamilton.”
Inside the house the recordings took place in a small side room. As well as Sarah, her son Tommy, Liam and Bobby Clancy entered in turn to be recorded. Catherine Wright who also travelled with Diane would come to the door to ask people to be quiet when someone was singing. When a recording was finished there was an outpouring of coughing and muttering in the main room. In order to gain quiet for the next recording there was an outburst of sshh, sshh. Everyone was sshhing everybody else. Anne Jane Greene, a noted singer too, became the self-appointed overseer of silence. When she put on a cross face, babies in prams up to half a mile away stopped crying.

THE FOUR MOST FAMOUS IRISHMEN
Sarah sang ‘The Month of January’. Diane Hamilton played it back on the recorder. Frank Toal said “I think she sounded better the first time.” not realising that it was the recording of the same song he was listening to. Pat ‘the Coiner’ Nugent went home and came back dressed in his good suit. He wanted to look his best in the unlikely event of him being asked to sing. He paraded up and down the footpath singing “I met her in the garden where the praeties grow” in his best Cork accent even though he had rarely been out of Keady. But Diane took no notice.
Despite all the distractions it was a most productive day as far as the recordings went. Much of what she recorded that day appeared on the album entitled ‘The Lark in the Morning’ and as well as Sarah’s ‘Month of January’ and ‘The Little Beggarman’, it included tracks by Liam Clancy singing ‘Whiskey you’re the Devil’ and Tommy Makem doing ‘The Cobbler.’ It has the distinction of being the first album-length recording of Irish music to be recorded in Ireland. It was issued on Tradition Records in 1956.
That momentous day in August 1955 was one shaped by destiny; and regulated by whatever way the musical heavens were aligned. From the moment they met, Tommy Makem and Liam Clancy’s DNA bonded and at once a musical brotherhood was created which was to transform Irish music and song forever. This was the day that Tommy finally decided to go to America and a few months later he found himself in Dover New Hampshire. Liam followed in 1956. In a few short years, along with Paddy and Tom Clancy, they were saluted as ‘The four most famous Irishmen in the world’

THE CONCERT
On Tuesday 16 April 2019, Donal Clancy and Rory Makem perform a special concert in the TMAC (Tommy Makem Arts and Community Centre), Keady, just a stone’s throw from where their fathers met for the very first time sixty four years ago. It will be a very special evening of emotion and reflection, when the sons of Liam and Tommy embark on a journey of nostalgia. re
For information about tickets for this important event contact TMAC 02837 521810 or johnmakem@yahoo.com