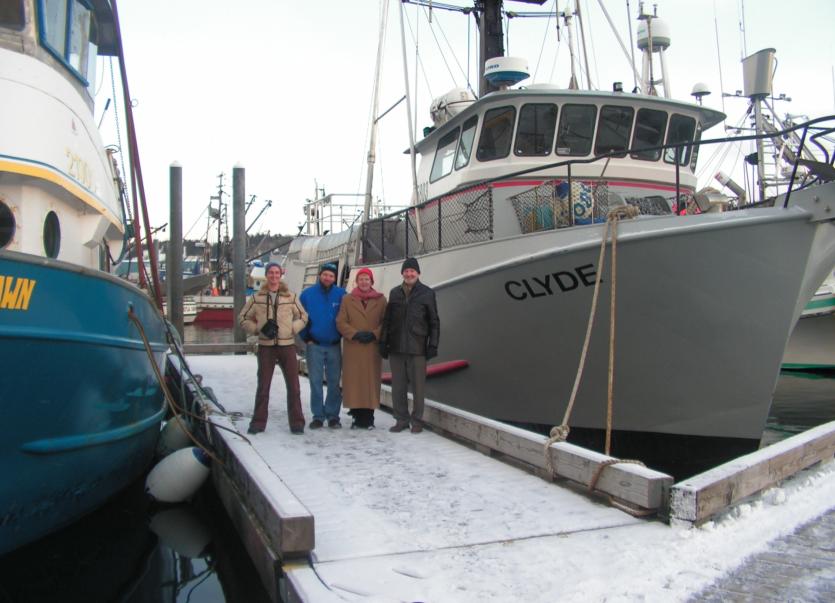 Left to right in the photo are Colm Hayden, James, the skipper of the Clyde, their parents Ann and Seamus Hayden who live near Ardara

Ardara man Seamus Hayden was close to tears this week - tears of joy - as he related the remarkable story of how his son James (53) and his crew beat the icy waters of the north Pacific when their vessel was shredded by a rocky outcrop in the Gulf of Alaska.
The FV Clyde, a magnificent 58 foot long liner of which James is skipper, was steaming on flat calm water off the coast of Atka Island, more than 900 miles from the vessel's home port of Kodiak, on Kodiak Island in the Gulf of Alaska.
Atka Island, which was invaded by Japanese forces in World War II, is nearly at the western end of the Aleutian chain of islands. The FV Clyde's home port of Kodiak, on Kodiak Island in the Gulf of Alaska Atka Island, more than 900 miles from the vessel's home port of Kodiak, on Kodiak Island in the Gulf of Alaska

A savage place in bad weather - it is part of the Pacific ‘rim of fire’ where more than twenty active volcanoes light up the night sky on a regular basis.
But last Saturday all was calm, hardly a ripple breaking the water. Had the weather been ‘livlier’, there is every chance the crew of the Clyde, who were on a long lining trip, might have seen breaking water over the submerged pinnacle which ripped into the vessel’s undersides.

RELIEVED
It was immediately apparent that the Clyde was doomed. A very relieved Seamus Hayden, James's father, takes up the story: “The seriousness of the grounding was immediately apparent to all four on board. Their well practised safety drill kicked in, like clockwork.
“Every man immediately donned his survival suit; vital if they were to have any hope of survival in the bitterly cold waters of the north Pacific. The emergency beacon was activated.”
Cool heads are needed in most situations, more so in this one, and skipper James kept his head. Using a satellite link on his mobile phone he called his wife Natasha - both to alert the Coastguard, and to get a direct number, so that James could contact them directly.
Meanwhile two crewmen released a small skiff, an aluminium runabout from the top of the wheelhouse, and got it into the water, while a third crewman got out the small outboard motor they used with it.

Emergency drill
The final part of their emergency drill was to release and launch the emergency life raft. That would be necessary if the weather deteriorated. A built-in canopy would protect them from even the most severe weather. The US Coastguard, heroes of many dramas, played a key role. There was a helicopter at the ready in a hangar at Adak, and a complete flight crew aboard a Coastguard Cutter in the vicinity.
Not only did they pluck the crew of the Clyde to safety, after they had managed to land their tiny skiff on Atka island with some guidance from the helicopter, which had reached the Clyde's skiff when the crew had still a couple of miles to go to make it to shore; but when they were landed back at the Adak station, there was even a Coastguard transport plane on the tarmac which landed all back at Kodiak after a further three and a half hour flight. The crew of the Clyde were safe in the arms of their loved ones by 5.30am on Sunday morning. Incredible.
Seamus Hayden reflects: “From my own experience at sea, and through more than twenty years as manager and MD of Swan Net Ltd, I'm very conscious that we can make our own luck; but the Guardian Angels of the crew of the Clyde were certainly on alert for them last Saturday - as indeed were the men and
women of the US Coastguard.” James Hayden (right) pictured a number of years ago. James has been fishing for

30 years now in Alaska and his cool head in a crisis ensured he and his crew survived.