Rubblish sermon takes on a whole new meaning in Ramelton 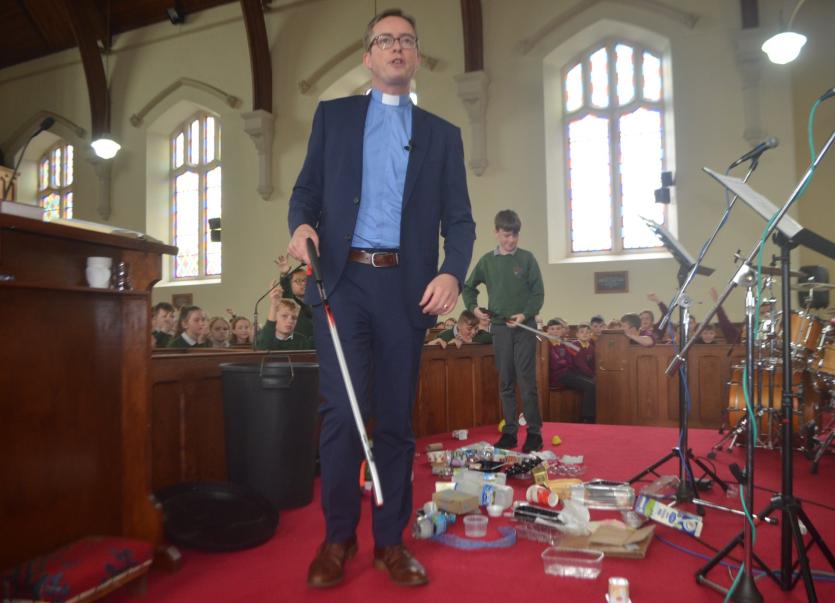 A 'rubbish' sermon in Ramelton!

Have you ever heard a 'rubbish' sermon?

Yes, no ...well that phrase ‘rubbish sermon’ took on a whole new meaning in Ramelton Presbyterian Church on Thursday morning when Archdeacon David Huss emptied a bin full of trash in front of around 500 children and teachers to illustrate his address on the theme of ‘God’s Creation’.

Children from more than 30 schools under Presbyterian or Church of Ireland patronage were bussed in from every part of the county – from Ballyshannon in the south west to the tip of Inishowen – to take part in the Service of worship and praise. The Service was led by the Moderator of the Derry and Donegal Presbytery, Rev Colin McKibbin, and the Archdeacon of Raphoe gave the address.

For the Rector of Donegal Group, it was an opportunity to get creative with ‘creation’. Archdeacon Huss used a large, inflatable globe to illustrate the First Reading, ‘God’s Creation, from the Book of Genesis. A volunteer from one of the schools was drawn from the congregation to identify where Ramelton was on the globe. The globe was unusual, Archdeacon Huss said, because it didn't show any cloud over Donegal. He told the children that we had an amazing universe, an amazing planet and an amazing world – made by a great God who wanted us to help look after this world. “What a brilliant plan,” the Preacher said, “a good world made by a good God and looked after by good people. But is it always like that? Or has something gone wrong?”

The second reading was ‘The Fall’ from Leviticus, 25: 1-7. Humans had pushed God to one side, Archdeacon Huss said, and tried to make themselves little rulers of the world, trying to do things their way and not God’s. “And guess what?”, the preacher said, “it doesn’t work.” It messed up all our relationships – with God, with the world, and even with ourselves. “So, all the good things God wanted us to do in the world get messed up: instead of exploration, there’s exploitation; instead of care, there’s corruption; instead of protection, there’s pollution.

“You see, what we’ve done is taken a brilliant world and made a mess of it: we fill our streets with rubbish, our seas with plastic, our air with fumes and our hearts with bitterness, anger and hatred.”

At this point, Archdeacon Huss stunned the congregation by emptying a bin full of rubbish at the front of the church to reinforce his point. “It’s a sad state of affairs,” he said. “Can we clean up the world?” He invited three pupils to join him at the front of church to pick up rubbish and put it back in the bin.

There were some great things we could do to clean up our part of the world, Archdeacon Huss said. “Use the car less; pick up rubbish; use less packaging; be happy with an old phone rather than getting a new one; tidying up the seashore; planting trees. Maybe some of you will become scientists who will come up with great ideas to clean the oceans or do better recycling or make greener electricity and so on. We can do things to clean up our school, our town, our world. But can you clean up the human heart?”

The third and final reading, ‘New Creation’, came from the Book of Revelation. The Bible had a message of hope, not despair, the Preacher said, and human hearts could be fixed. When Jesus rose from the dead, it was the beginning of a whole new chapter for the world.

“So, as I finish, what should we do?” Archdeacon Huss asked. “First, have care. We need to look after this world – it really counts. It’s important, it’s precious, it’s God’s great creation. imagine if you made a lovely work of art and someone messed it up – you’d be sad! God is too.

“Second, have hope. We don’t despair. We don’t say: ‘It’s all doomed’! Planet earth is finished. No, there is hope! Have hope, and work on good, sensible ways of doing what God made us to do: care for creation. And all the time remember that God is in control and he has good plans.

“Thirdly,” Archdeacon Huss said, “have faith. The number one thing is: believe in Jesus. If we want to live the right way in the world, we need to look to the one who made the world and saved the world. He loves us, he cares for us, he died for us. Let’s give our lives to him.”

As the Service ended, classes were given their now traditional ‘goody bags’ as they left Ramelton Church. This year, though, the usual plastic bags were dispensed with and groups were given recyclable bags containing – among other things – packs of daffodil bulbs which they were urged to plant to make their schools more beautiful.