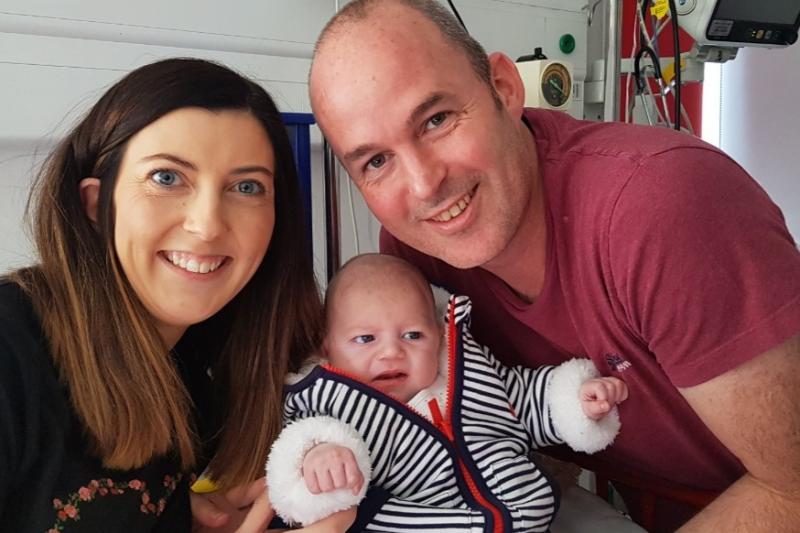 At 18 days old baby James Devenney was rushed from his local doctor’s to Letterkenny University Hospital and then on to Temple Street after contracting Strep B Meningitis and Sepsis.

Thankfully after three weeks the infection had cleared up and although his parents were told he has suffered brain damage from the meningitis, so far he is showing all positive signs.

His family would like to raise as much money as possible for the organisations who helped them in James’ time of need and have organised a walk which will take place at Inch Wildfowl Reserve, Burt on Thursday, December 26 at 11.30am starting at the Pumphouse car park.

It promises to be a great fun morning between family and friends to support these amazing charities.

"We are organising a walk on Boxing day to help raise funds for Letterkenny Children's Ward, Temple Street Children's Hospital and Hugh's House. These three organisations were tremendous and instrumental on helping our wee baby boy, James, to his recovery, said dad, Gareth.

"On Monday, September 9 at only 18 days old James was rushed from our own doctors surgery in Newtowncunningham to Letterkenny hospital by ambulance with suspected meningitis. It was all a blur but thankfully our local doctor gave James the antibiotic on arrival that potentially saved his life.

"We will be eternally grateful to them for that. James was treated in Letterkenny for the next few hours until it was said that he would need to be transferred to Dublin. We travelled the long journey during the night to Temple Street.

"When we arrived we were told James was a very sick boy and that the next 48 hours were critical. At that stage we were still waiting on bloods to find out exactly what was wrong with James but on Wednesday it was confirmed every parents worst nightmare that James had contracted Strep B Meningitis and Sepsis.

"Thankfully after a few days his wee body started to accept the antibiotics and that was the start of his road to recovery. He was put on a course of antibiotics for three weeks and still got round the clock monitoring from doctors and nurses," he said.

After three weeks the infection had cleared up.

"We were told he has suffered brain damage from the meningitis but so far he is showing all positive signs.

"Hugh's House was a saviour to us as a family when were in Dublin as we were offered free accommodation which just was like a home from home and so close to the hospital.

"We want to hold this walk and raise much needed funds for these three amazing organisations that certainly saved our son's life. We would also like to thank everyone for all their thoughts and prayers that really helped us through this tough journey.

"Let's make this a great fun morning between family and friends and support these amazing charities," he added.