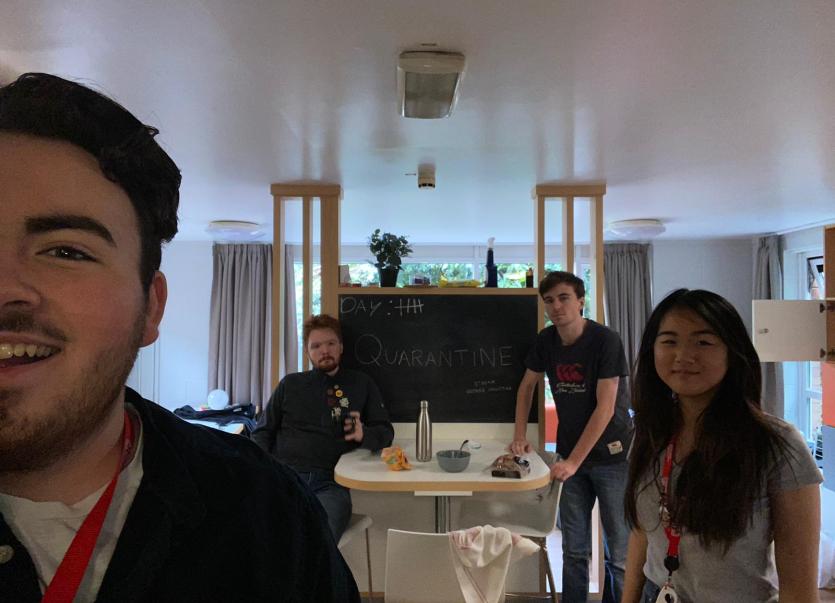 Conor Hegarty with his quarantined flatmates in Queen's University, Belfast's halls of residence.

In common with many of his Donegal contemporaries, Conor Hegarty's transition to third-level education has been a baptism of fire.

Speaking to Donegal Live from his enforced quarantine in Queen's University, Belfast's halls of residence, Conor said the announcement by Education Minister Norma Foley on September 30, two errors had been found in coding used in the Leaving Certificate 2020 Calculated Grades process, had spread confusion.

The young Burt man, who learned via a Department of Education text, at the weekend, his grades were unaffected, said: “I think that the Leaving Certificate this year was, in one word, confusing.

“From the very start in May, when we were told that we would not be doing our Leaving Certificates, every single student I knew was completely confused. We did not know what way it was going to go at all. We put our trust in the Government and our teachers and hoped we would get the fairest grades we could.

“And then for the news to come out that the grades were wrong, the algorithm was wrong, it has affected a lot of people. Luckily, I received and unconditional offer for Queen's, to study History, a month before the results were set to come out. If I had not received that unconditional offer, the Leaving Certificate grades awarded to me would have meant I would not be were I am today. I would not have got into Queen's. I was marked down on most of my subjects by a least one grade.

“I am annoyed. I know I am at university now and the grades do not affect me any more. However, if this was a normal year, students could appeal their results but because the grades were predicted, it is annoying the Government did not get the Leaving Certificate process sorted out. We are still having amendments and it is still changing things. Nothing has been definite for months,” said Conor.

“On Monday week ago, one of Conor's seven flatmates tested positive for Covid-19.

He said: “Queen's has now put us under strict social distancing. Our kitchen only has a capacity of five, so three people are excluded from the kitchen at certain periods of time.

“We are not allowed out of our halls. We are allowed to the front door to collect grocery deliveries, other than that we are not allowed out. We all think we might now have Covid-19 because we were all in such close contact with each other. We all feel asymptomatic at the moment. We don't have any symptoms.

“I have in person seminars and tutorials this coming week but because we have been in quarantine, I have had to email my lecturers and they have uploaded the work so we can access it online.

“I feel that the way Queen's is uploading work is very good. It is very easy to access. The online side of things is perfect. I have had no problems so far. My quarantine ends on October 14 when I might go and get an antibody test to confirm whether or not I did have Covid-19,” said Conor.