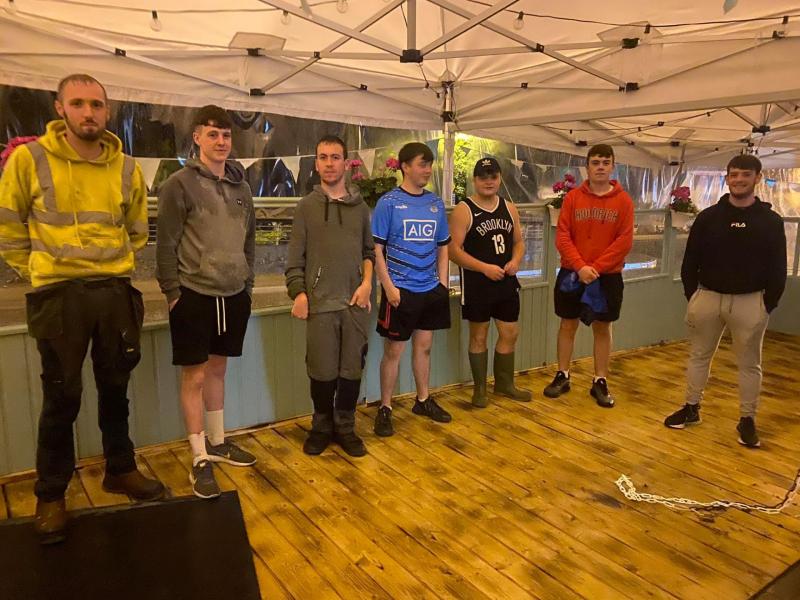 ‘Flood heroes’ is how a Donegal restaurateur describes young people who came to her aid late at night as water flowed into her business.

Co-owner of Quay West in Donegal Town, Jo Roarty is in no doubt that she and her business partner could easily be facing a very different future. The restaurant was flooded during torrential rain on Thursday night and in the early hours of Friday. Six of her son’s friends and a woman who unfortunately has first hand experience of being flooded rallied to help.

“They saved our restaurant,” she said. “They were the difference between a few inches of water and a few feet of water.”

If the water level had got any higher, equipment would have been damaged and the consequences could have been a lot more serious.

“As it was, we had to close but we are open again now,” said Ms Roarty. “If the equipment had been destroyed, we couldn’t have opened up this summer.

“We have lost out on so much already because of not being allowed to open for indoor dining in July.

“This is the only chance we have to get some kind of pot to get us through the winter months. We are very grateful to the people who helped us.”

The nightmare began at around midnight on Thursday night.

“I really believe there are people upstairs thinking of us and helping us. For no particular reason, Michael went into town for a spin and he saw the water running down the hill.

“I was in my pyjamas but sometimes you just have to run, you don’t have time to think about what you are wearing or what you look like! I put on a pair of wellies and got there as quickly as I could.

“There were a few inches of water in the restaurant at that stage. The water was still coming in. There are walls out the back so it had nowhere to go. It was deeper there; the water was up to my son’s knees.

“So there I was, in pyjamas and wellies, on my hands and knees in the pitch dark desperately trying to find the manhole so I could open the cover and hopefully clear the water. I must have been a sorry looking sight.

“Out of nowhere, the lads arrived. They helped push back the water coming into the restaurant. They were amazing, and so humble. They don’t want any reward or any thanks.

“No matter what we needed, they had it under control. They were running about getting everything done.”

What makes this incident particularly frustrating is that it is by no means a once-off.

“There is a gully further up the hill, opposite the old McGinley Motors building,” said Ms Roarty.

“It overflows and the water runs down the footpath.

“The first time it happened in 2017, only for the fact that I was here with a floor brush and I kept the water out, it would have been a lot worse.

“The council knew about it then, and I have kept on at them ever since. It is so frustrating. This has been highlighted and highlighted.”

Locals say the problem goes back a lot further.

Ms Roarty said: “A woman stopped me in the street and said, ‘This has been going on for 30 years.’

“It should have been fixed long before now.

“I have been given assurances that it will be sorted between October and Christmas. I really hope that is the case.”

In the meantime, Donegal County Council has supplied sandbags to help prevent the restaurant from being flooded again.

“That is all very well, but bear in mind that we are two women running this restaurant,” said Ms Roarty.

“We have to be on constant standby every time there is rain to rush in and start lugging sandbags around. It is not good enough when the problem could have been fixed a long time ago.

“We have had so much to deal with, I’m not sure how much more we can take.”

It is not only Quay West that is affected by the floodwater.

“You see the kids coming down from school when it is raining and they have to actually go out onto the road to avoid the water,” said Ms Roarty.

“That is so wrong, and it is an accident waiting to happen.

“There are some elderly people who come up and down the footpath here too, some of them with walkers and it is so unsafe. The footpath is very uneven because of the water on it.

“This really needs to be sorted out before someone gets hurt. That is the most important thing.

“We do our bit, we keep the area clean ourselves because the street sweeper doesn’t come up this far. We tidy up the area and we sweep the water away from our door.”

When asked what message she would like to give to Donegal County Council, Ms Roarty’s answer is simple: “Get it done. Please just get it sorted out.”

The team at Quay West express their thanks to their ‘flood heroes’ Sheena Culloo, Eoin Gorrell, Aaron and Gareth Culloo, Eoghan Jordan, Jordan Ryle, Darragh Geary and Michael Roarty; Donegal Fire Service for their prompt response and assistance; and everyone who helped in any way or sent messages of support in the aftermath of the flood.

“The incredible community spirit is what got me through,” said Ms Roarty.