Drumboe last hauled scheduled passenger trains in the county in 1959 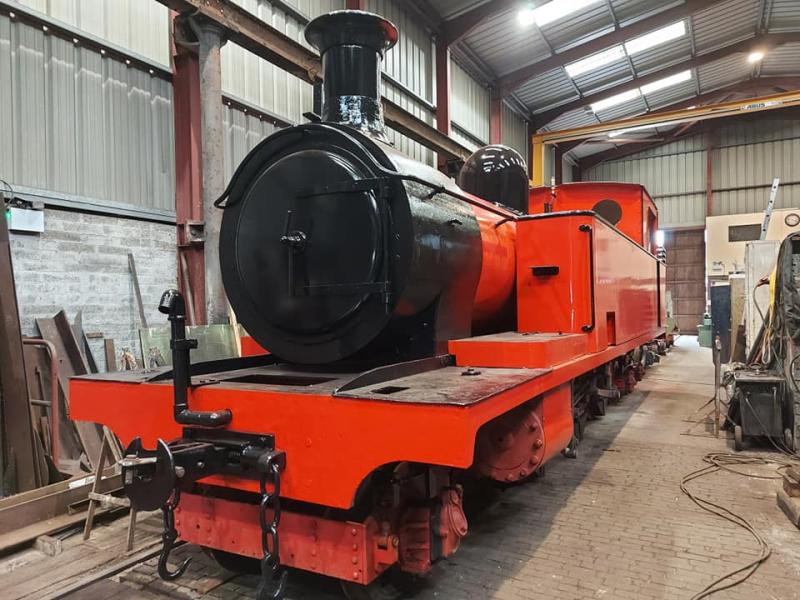 History will be made on Saturday week, October 9, as the first original Donegal steam locomotive is set to return to the county in decades.

The engine will be taken carefully from the restoration yard at Whitehead in Co. Antrim on a low-loader through Derry, Strabane, Stranorlar, and on to Donegal Town, where she will be on view for a short period mid-afternoon in the town centre, before her final short journey to the Donegal Railway Heritage Museum.

This engine has come full circle, as it was the very last engine to operate a passenger service in the county, on December 31, 1959, leaving Donegal Town Station for Strabane.

It has been a challenging year and a half, with Covid lockdowns delaying work on this landmark project.

There are two main parts to this project, the restoration of the engine itself, and also the building of a new presentation platform and canopy at the museum.

Many people have been asking if this is just a cosmetic repair, or can she go back into steam, and the answer is that most of the engine is being fully restored to operational state so that when funding becomes available, that she could certainly go back into steam.

The only part of Drumboe which is not being restored at the moment is the boiler. There is no use in restoring the boiler and getting it certificated until there is the land and a track to run it on, never mind the substantial monies required to do this.

However, this is seen as Phase 2 and preliminary work has already started on drawing up terms of reference for a feasibility study, which would be needed in order to attract funding. Phase 2 will be a medium to a long-term project, but this initial work which many thought they would never see is an important step towards this vision.

Thanks to donations from across the island of Ireland and further afield, including from members of the Donegal Railway Heritage Centre,  Graham Forbes (grandson of Co Donegal Railways manager Henry Forbes), The North West of Ireland Railway Society and many others, it was Donegal Local Development CLG who came in with the main part of the €100,000 project with the LEADER grant from Donegal County Council.

The engine has now been restored, and all involved are looking forward to her return on Saturday 9th October.

Separately, the museum itself is receiving an upgrade in preparation for Drumboe’s return.

A new presentation platform is nearly complete, and once the engine is carefully lifted into place, a new canopy will be installed above the engine, railway carriages, and wagons.

There will then be landscaping to complete, feature lighting to be installed, and a small track for a children’s ride-on to be installed at the back of the station.

The museum will be further enhanced through generous Heritage Council funding, for new museum-quality signage and two audio signs, as well as funding through the Donegal Culture & Creativity Grant Scheme for a new “Donegal Railway Heritage Guide” for the county.

A spokesperson said: “This welcome investment will ensure that this unique museum is a must-see for locals and tourists alike, which celebrates the unique Donegal railways that once operated across the county.”

For more information about Drumboe or the museum in general, contact Niall at manager@donegalrailway.com