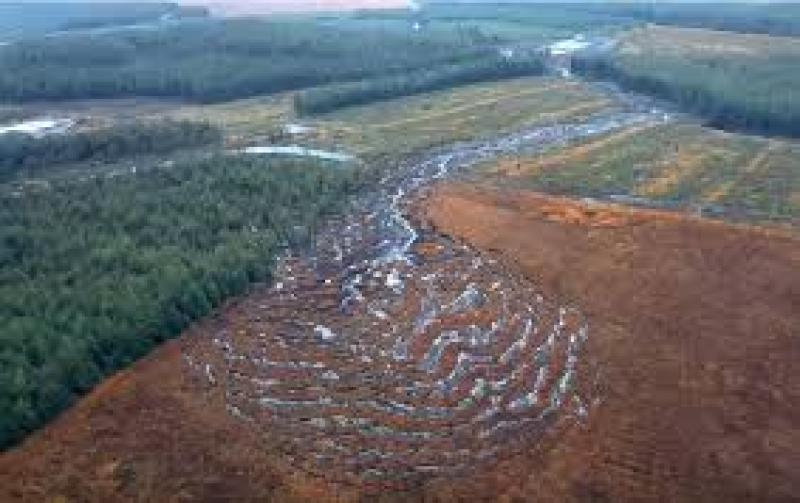 A section of the area affected by the Meenbog peat slide

He was joined by Órfhlaith Begley MP, Maolíosa McHugh MLA as well as by local Sinn Féin councillors from Donegal and Tyrone.

Speaking after the meeting, Deputy Doherty said that it is clear that there is no shortcut or quick-fix solution to the issue and that it could be years before the river is back running as normal.

"The Loughs Agency has confirmed to Sinn Féin that there has been a significant impact on the local fish and fauna as a result of this landslide."

"It is frustrating that this has been allowed to happen, because we learned that not only had we in Sinn Féin objected to the development of the wind farm at the site, but the Loughs Agency had also registered their concerns and specifically warned of the potential of a bogslide of this nature.

"Had these concerns and objections been listened to and followed, we might have avoided this entire situation," he said.

He added: "I and my Sinn Féin colleagues welcome the criminal investigation now being launched by the Loughs Agency into this event.

"It is a serious wake-up call for considerations of large-scale developments located in peatlands. Thankfully, there has been no contamination of the public water supply as a result of this landslide, but there is no guarantee that this would be the case with any future landslide."

"Sinn Féin is calling on the company responsible for the wind farm at the location of the landslide to permanently cease activities at the site and to withdraw any proposals for future developments there."