Historic Redcastle House back in the possession of a Doherty 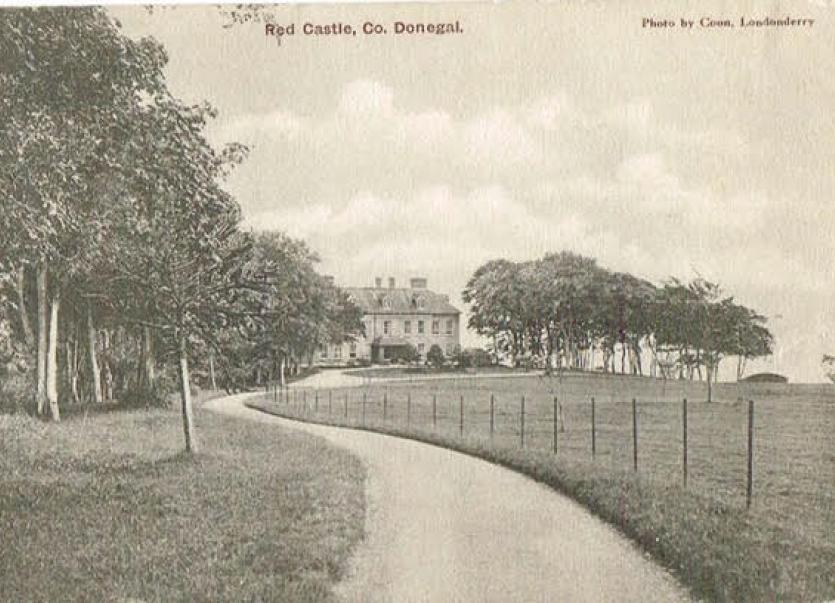 Redcastle House, now the Redcastle Hotel, is the first hotel you come to on the Wild Atlantic Way travelling from north to south.

The Redcastle hotel is located in the once proud and independent peninsula of Inishowen.

The last of the Irish chieftains with whom this site is associated was Cahir O'Doherty.

Cahir became chieftain at the age of 13 in 1601, after the death of his father, Sir John O Doherty. In order to secure his position, Cahir changed his family’s side in the Nine Year War year and swore loyalty to Queen Elizabeth, because of Inishowen's important strategic location and the defeat of the Confederates at Kinsale in 1601.

The war ended in 1603. It resulted in the Flight of the Earls from Rathmullan in 1607 and the Plantation of Ulster. Cahir thought his reward for his help and loyalty would be great. But apart from being knighted and acquiring the title Sir, he was to be disappointed.

In frustration the 20-year-old chieftain rebelled in 1608, sacking the English held city of Derry and burning it to the ground. He was killed shortly after this in the Battle of Kilmacrennan, just outside Letterkenny. Because of this rebellion King James I ordered the great walls of Derry to be built.

After Cahir, the last Inishowen Chieftain, was killed, all his lands in Inishowen were seized by the James I for plantation and divided between The Established church and Arthur Chichester. The two separate entities that were then Inishowen and Tyrconnell were joined and made into one county. It was named Donegal.

The first house built on the site of the Redcastle hotel was built by the Carey family. The Cary family were landlords who received plantation lands from Moville to Muff. The family lived here from about 1622 to 1822, almost exactly 200 years.
Unfortunately for the Carey's, they had money problems and eventually were forced to sell the Redcastle house and Estate in 1822. Thomas Doherty from Muff purchased the house from the Carey's, but because of legal issues it took 18 years for them to complete the sale.

The most famous of the Careys was Joyce Carey. Joyce Cary was listed in the top 100 writers in English by The Sunday Times. Some of his books were made into film. His son and grandson continued in the creative theme and were involved in TV series such as Dr Who and Captain Pugwash.

Thomas Doherty left the estate to his youngest daughter, Jane, who was married to Dr Richard Doherty, a lecturer in midwifery in Queens University, Galway. Dr Richard Doherty died in 1876 and his wife Jane in 1882.

Richard converted to Catholicism late in his life and left the Redcastle estate to his daughter, Elizabeth and her husband Captain Ernest Cochrane, on the condition that the children be brought up as Catholics.

The year before Elizabeth died she was in dispute with the local land league on the reduction of rents. Armed men were employed to secure her crops after locals refused to harvest them. They were unsuccessful at getting the crops harvested, but it is said they did get through quite an amount of Jameson whiskey and food.

Captain Ernest Cochrane was the son of the famous and notorious Lord Thomas Cochrane, on which the films Master and Commander and Hornblower are based. Earnest's famous bloodline does not end there as he is also a descendent of Robert the Bruce who actually invaded and occupied Northburg Castle in Greencastle for a short period.

True love must have been very much in the air as the condition that Richard Doherty left for marriage and inheritance at this time would have been quite a diplomatic feat, given that Earnest was also the high sheriff of Donegal. But they managed it. Captain Cochrane went to church in his Model T car. Reg number 1H11 (now in the Ulster transport museum) and Elizabeth and her children in their horse and carriage to Drung Chapel.

To this day they are still separated, Earnest in a grand monument grave in front of the now derelict Church of Ireland Church in Redcastle. Elizabeth Francis with her children and her parents are interred at the alter area of the old Catholic Church, Drung.

After the various land acts that were introduced after 1881, landlordism went into terminal decline. Lands were sold off and the large houses were either left to rot away or knocked down to avoid taxes on them. Redcastle House survived. Captain Earnest Cochrane died in 1911 and Elizabeth Francis in 1929. The Cochrane's remained and turned their hand to farming and in the 1960s opened the Redcastle House as an Hotel. The Cochrane's sold Redcastle in 1972 and the hotel is now once again back in the ownership of a Doherty.