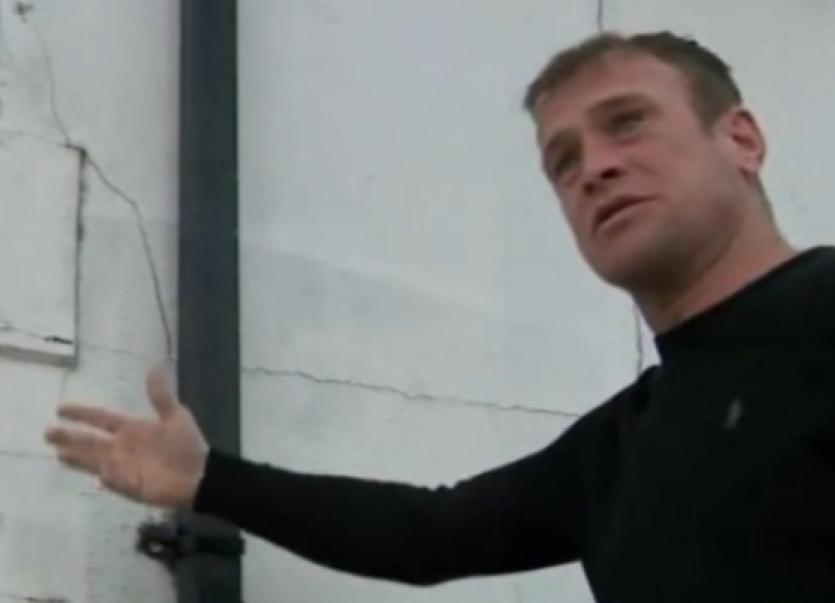 Paddy Diver, mica campaigner and co-founder of '100% Redress No Less' has been proposed for membership of Donegal County Council's Mica Redress Committee.

Michael Doherty said he had asked An Taoiseach about mica-affected houses, which only had their outside leaf remediated, as regards the 'One House - One Grant' aspect of the Defective Concrete Blocks Scheme.

He added: “I would say is it is still subjective not objective. The amount of times I have been to Leinster House, and it didn't matter who was in Government, and I came back up the road with a smile on my face thinking we had something in the bag, only to find out months later, we were still not a lot further forward.

“So, I am still, very, very cautious, based on what I saw, but what I would say is, I think An Taoiseach, regardless of the amount of videos I'm sure he has seen and the submissions made to him, you know yourself, anybody who's got it [mica] it's when you go and you feel that gravel, you tap a block and you see pieces of it falling off and you've got bison slabs being supported by the likes of that and rooves being supported by the likes of that, I honestly think, there was a strong impression made on him yesterday.

“Now what that translates into, in terms of actions, remains to be seen. We are the Mica Action Group and the Paddy Diver campaign is out ground force here. We won't be easing off in the slightest.

“However, I do believe, certainly, if Minister McConalogue pushes it the way he ought to be pushing it at Cabinet level now, when he looks across at Micheál Martin, Micheál Martin will know what it is he is talking about because he has seen it first hand himself. I think that can only be to our benefit.”

Cllr Martin McDermott said the costs like rent were also discussed at the start of the meeting.

He added: “An Taoiseach wanted to get his head around where the escalating costs were. We explained to him that the vast majority of houses we were dealing with here in Inishowen and the county, were of a quite substantial size, 2400 square feet being the average.

"He understood the reasons and where we were coming from and those costs. He came up after to two of us and said, 'I've got a good insight regarding what you are saying'. He said he did understand the fact that people had to be out of their houses and had to pay rent and that certainly was an issue.

“The 'One Home – One Grant' he said he would take back to [Housing] Minister Darragh O'Brien and he was going to get Minister O'Brien and his staff to liaise with the team here in the Council and look at those applications and see exactly what's coming in and the way it is coming in and the sizes, so they can have a look at what is the best avenue to go forward.

“He didn't actually give any definites as to exactly what he would do but he said it was certainly a major problem and something that they were taking very, very seriously. He definitely has a lot better insight into the cost element and the amount it is costing people and the Scheme and the amount it is costing homeowners to be part of the Scheme.

Mr Joe Peoples, Donegal County Council's Director of Housing, Corporate and Cultural Services, addressed the issue of the Scheme being changed and the capacity of the Council to respond to that.

He said: "The Scheme has been operating for a good period of time and we are now seeing what the resource requirements are to make it work efficiently.

"At the beginning, we did not know whether we were going to get five applications in the first month or 500, so we could not resource until we established what was needed. We are now in a position, if we are getting 100 applications a month, we will allocate the resources and we will bring on more people as necessary.

"In fairness to Government and the Department, they are funding those costs 100%, so if we need another 10 or 15 or 20 staff, as we move forward, on the basis that our workload is increasing, and we have more applications to process, then we will add the resourcing to the team.

"We now have the system of work in place. We are refining it all the time. The turnaround times are improving and will, hopefully improve further . The process we are using will become more efficient and that will mean we will then be able to manage greater numbers of applications on the basis that our system of work is fit for purpose and we have the staff in place," said Mr Peoples.

Joe People stressed, however, people needed to "make an application the Scheme".

He said: "I do want to sent out a message to people who need to make an application to the Scheme and I have done it before. Please continue to make your applications and we will process the applications as expeditiously as we can.

"Please don't delay making the necessary preparations for our applications. Please continue to do that and, if the Scheme changes, you will benefit from any changes that come forward in the next while in relation to the conditionality of the Scheme.

"We will step up to the ask from the citizens, in relation to getting an opportunity to get their application processed as quickly as possible," said Mr Peoples.