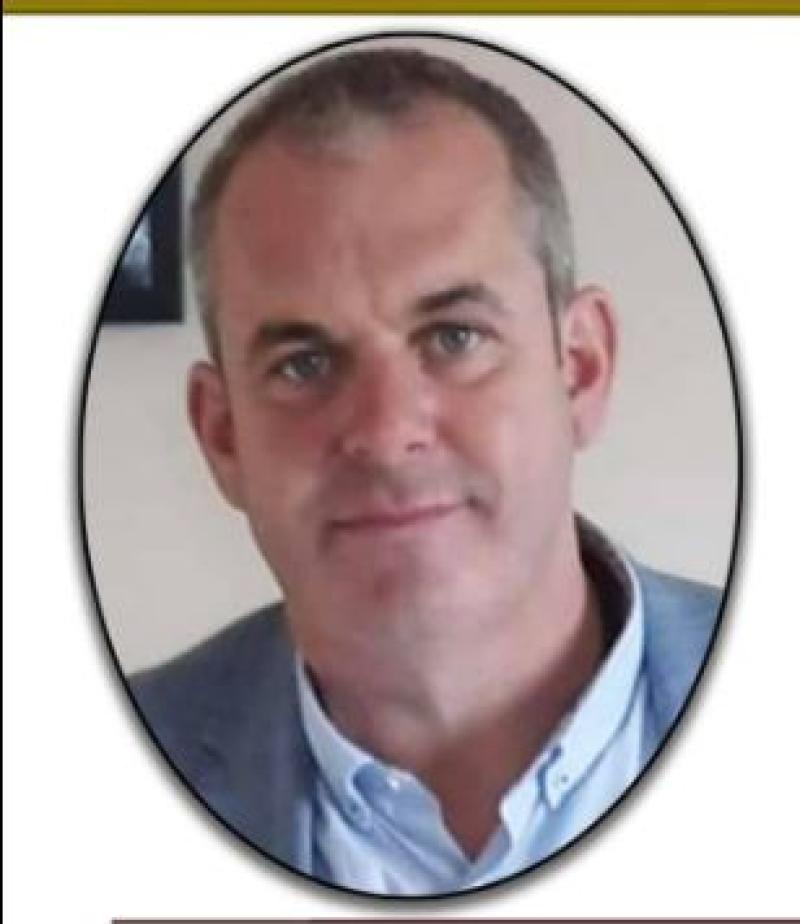 The Mass was celebrated by an tAthair Brian Ó Fearraigh who described Dessie as a loving husband, a devoted father, a loyal son, a kind brother, a noble uncle and a good friend.

Dessie Mc Fadden,46, passed away earlier this week after a long and valiant battle with illness.

Before the Mass, Dessie’s sister Eileen read a moving poem in his memory.

During the Funeral Mass, Father Ó Fearraigh remembered Dessie’s mother Annie and nephew Daniel who passed away a number of years ago.

He said the community were united with those who were saddened and broken hearted following Dessie’s death.

He said that death could be felt in the shedding of tears, in the heaviness of hearts, in the hugs and in the dark clothes that symbolised the dark cloud of grief that had fallen on the hearts of those who are forlorn following Dessie’s death.

The priest noted the huge difference that exists between the darkness and sadness and the great light, the wonderful kindness, love and goodness that existed in Dessie during his lifetime.

As his funeral cortége meandered up the hill towards the chapel on the hill top, neighbours lined the road in respect for Dessie and his much-respected family.

Students from both Pobailscoil Ghaoth Dobhair and Scoil Adhamhnain an Lunniagh stood as guard of honour at the gates of the chapel which stands under the sweeping shadow of Cnoc Fola.

A treasure box of memories

He spoke of the gospel where two friends walk along a road, broken hearted after the death of Jesus. He said they were mourning the death of their dear friend, Jesus.

“I suppose they were doing what we all do at a time of loss, they were remembering and thinking. As they walk along the road they are sharing their memories of Jesus,” he said.

The much-respected priest said that he knew that those close to Dessie had been doing the same thing over the last number of days.

“Those memories are important because you will have those memories for the rest of your lives. You will carry them in your hearts until your final day. I believe that memories are like a treasure box that we can open and visit again and again. A box of treasures that can be revisited at any time. We can go back through them and we can call the person to mind - we can see his face - you can almost hear his voice such is the power of memory,” he said.

It is no coincidence, he said, that Jesus said to his disciples ‘do this in memory of me’.

He said that every time people gather for the Eucharist ‘we make Christ present.’

“The Church fulfils the mandate of Christ,” he said.

In death life has changed and not ended, Father Ó Fearraigh told those gathered.

He recalled Dessie who loved life who himself ‘was larger than life’ who had a sense of joy about him and who was a harmless rogue.

Father Ó Fearraigh said that he met Dessie, at times, on his journeys in his beloved red van.

He recalled how Dessie loved to ‘wind people up’.

“I know he was so very proud of his family, each and every one of you Sarahanne, Dillon, Matthew, Jayden and Desmond. A proud husband and father and I know that you loved him in return, as well - a deep and endless love,” the congregation heard.

He described Dessie as one in a million: “He was a remarkably faithful man all his life.”

He spoke of the day that Dessie and Sarahanne married: “You were his rock,” he told her, “you were his strength.”

He said that Dessie was loyal to Sarahanne, his sons, his father, Paddy Ghracie and his entire family.

“You his family and friends, you were and you are the great love of his life because family was so important to Dessie. He was a family man.”

An able worker and 'grafter'

He recalled Dessie and the days he enjoyed at Bun an Inbhear beach, of his days at the barbecue where he would enjoy feeding all those who gathered.

Dessie worked hard, he could turn his hand to any work.

He worked hard since he began work at the age of thirteen and worked up until a few days before he passed away.

“Dessie was a skilled carpenter and builder. It didn’t matter what was needed - he was a very adaptable man who could move from one thing to another, building a house from start to finish,”  Father Ó Fearraigh said.

Dessie would also work the bog and would leave home in his beloved red van and head away to do a hard day’s work. The congregation heard that Dessie was a grafter and he believed that hard work paid off.

Dessie also had a very kind and generous heart and worked for St Vincent de Paul delivering furniture. Father Ó Fearraigh said that he did this work quietly and would never be heard talking of it.

“He was mild mannered. He was generous, He was a quiet gentleman” he said.

Father Ó Fearraigh said that when Dessie became ill it was a difficult time for him and his family.

Alongside this ‘wretched illness’ came highs and lows said the priest, a time of highs and lows, of false dawns and shattered hopes.

“But throughout it you were all there for him and this would have given him courage and helped him carry on. He never complained, he just got up and got on with it. He carried many crosses patiently and with hope in his heart and that portrays to us today the kind of man he was,” Father Ó Fearraigh said.

A man of faith

He was a man of faith which brought him relief in his time of illness.

“On his deathbed, Dessie received the sacraments of the church, those sacraments that brought away sin and guaranteed Dessie safe entry into God’s presence. So, we give him thanks for all that he was as the husband, the father, the son, the brother, the uncle, the dear friend and have given him back to God. Let’s not have a sense of loss but a sense of completion. Now, Dessie returns to God and will continue to watch over and guide his loved one’s on earth,” he said.