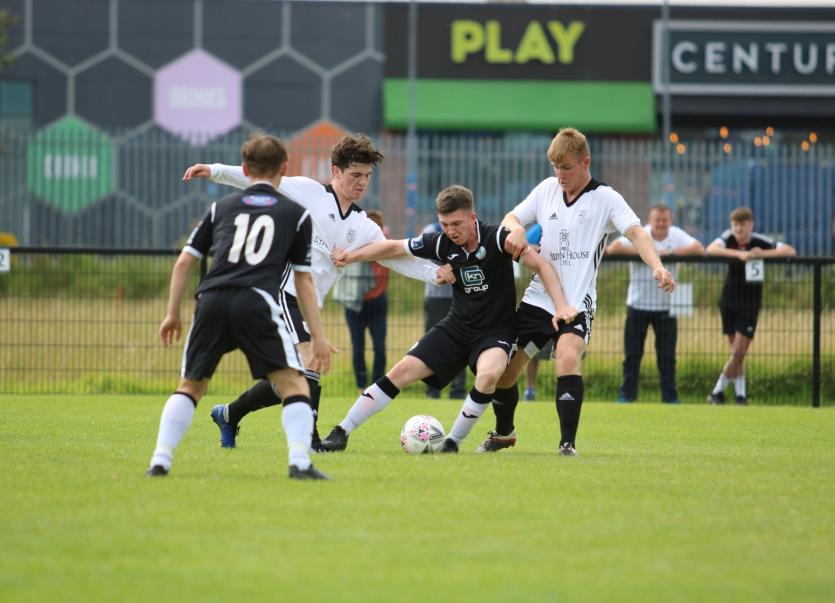 Bonagee United have earned the bragging rights in Letterkenny after they finished above Letterkenny Rovers to clinch the runners-up spot in this season's BMC.ie Ulster Senior League.

On the final day of the season, Bonagee beat already crowned champions Cockhill Celtic 1-0 away while Letterkenny Rovers lost at home to Finn Harps Reserves.

An away win over already-crowned champions Cockhill secured the runners-up spot for Jason Gibson’s men.

Bonagee had the first effort on 5 minutes when Jordan Armstrong flashed a free kick narrowly wide.

Cockhill should have taken the lead on 8 minutes when good interplay between Daniel Doherty and Stephen Duffy released Mark Moran. Moran's cross was headed back across goal by Laurence Toland to Duffy who dragged his shot wide.

Bonagee went close on 17 minutes when Dan O'Donnell was first to a Cockhill clearance. His shot from the edge of the D was well held by Eoghan Jordan.

Bonagee were on top now and had another effort on target on 32 minutes when Ryan Rainey's header was straight at Jordan.

The best chance of the half fell to Armstrong who latched onto a speculative effort from Rainey but his low shot went past the far post.

The second half started with chances at both ends.

First, a Bonagee corner was flicked on and Jamie Lynagh blasted over at the far post. Then, Ronan Doherty found Stephen Duffy whose shot had Ferry scrambling but found the side netting.

Bonagee had the next opportunity when Armstrong chased a long ball, cut inside and shot but was denied by Jordan with a smart near post save.

On 63 minutes Duffy's through ball found Laurence Toland but his shot was straight at Ferry. Within a minute Bonagee were ahead. A back pass forced Jordan into a headed clearance which was pounced upon by Funston whose acrobatic effort hit the bar and down, awarded a goal by assistant referee.

Cockhill huffed and puffed after this setback without creating any clear chances. Indeed, it was Bonagee who doubled their lead on 83 minutes through a Ryan Rainey penalty, awarded for handball.

Finn Harps Reserves warmed up for their assault on the Airtricity u19s campaign when defeating Letterkenny Rovers 1-0 at a hot and sultry Leckview Park on Sunday afternoon.

It was the final day of regular league action for the home side and they can now concentrate all their energies on two final dates looming large on the horizon with deciders in the Donegal News League Cup and Knockalla Cup.

The game was a bit of a slow burner initially with a Joel Bradley-Walsh free kick going narrowly wide and a Ronan Gallagher header half chances for Harps in the opening quarter in a game which despite plenty of endeavour didn’t come to life until the final moments of the half.

Then, a a stunning Corey McBride effort was well saved by Rory Kelly in the Rovers goal and from the resultant corner Gary Merritt blocked Ronan Gallagher’s stinging effort on the line.

Connor Gormley then almost put through his own goal on the stroke of half time for a Harps side keen to impress watching senior boss Ollie Horgan while their defence was solid denying Rovers any real clear cut openings in the opening half.

Harps started the second half in similar vein and came close through McBride on 48 before taking the lead on 55 minutes when a deep cross wasn’t dealt with at the back post and the ball fell to Lee McLaughlin and he fired low past Kelly.

Rovers though improved as the half went on and forced a number of good set pieces from which they looked most likely and came close through Emmet Friars and Gormley with headers and a Lee Toland free kick with Leon Doherty also lively going forward.

Some solid defending from Harps defensive line led by Joel Bradley-Walsh ensured they were in no mood to give up any easy chances while Harps did come close at the other end and should have doubled their lead through McBride but he saw his shot go narrowly wide.

Harps boss Tommy Canning will be pleased how his side has gone tot-to-toe with their more senior opponents in the league this season in preparation for their national campaign while Rovers boss Eamon McConigley will be hoping to fine tune his side after a busy schedule when those final dates come around.