McGinley back from suspension - but will he play? 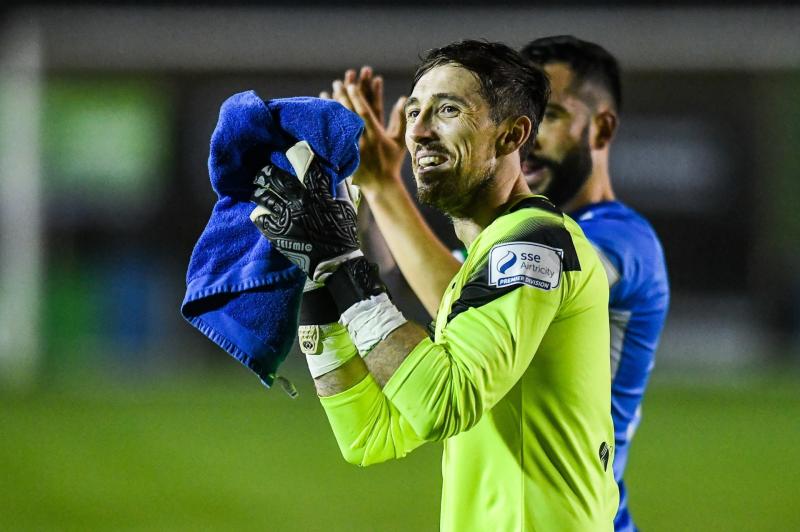 Mark Anthony McGinley is available following his suspension for Finn Harps’ SSE Airtricity League Premier Division clash with Dundalk on Friday - although that’s not to suggest Gerard Doherty will be back on the bench.

McGinley, who has had a fine season, was sent off in the recent 2-2 draw against Derry City and was banned for three games with Doherty taking over in goal and giving manager Ollie Horgan plenty to think about.

Horgan praised the impact Doherty has made since joining the Ballybofey club, both on and off the pitch and wouldn’t be drawn on who would start on Friday. It's the third time Harps and Dundalk meet in 15 days.

“Gerard is a good lad with huge experience and has really bought into what we’re doing here,” Horgan said. “He’s played at a good level in Wales in TNS and was with Derry for years and Crusaders.”

Doherty has performed well in recent weeks, including the 2-1 win at Bohemians last Friday night in Dublin where goals from Ethan Boyle and Dan Hawkins grabbed a fine away win.

“A lot of things went our way,” Horgan said. “Georgie Kelly had three headers that went past the post that might’ve gone in on another day. We rode our luck in the first half and in the second half we were quite good. We’d something to hold onto and we had legs again.”

The sides have met twice in the last fortnight alone, with Dundalk eventually winning a place in the FAI Cup semi-finals following a 3-1 extra-time victory last Tuesday week.

Sean Boyd had shot Harps into an early lead at Oriel Park before Sean Murray, a Pat Hoban penalty and a free-kick from Michael Duffy sealed the turnaround. The initial contest ended in a 3-3 draw with Boyd scoring a double late on which brought Finn Park to life.

Karl O’Sullivan is definitely out on Friday, though, with Will Seymore still recovering from a hamstring injury picked up against Bohemians at Finn Park. Kosovar Sadiki is in contention for a return to the team.

Dundalk have had their issues this season but have turned the corner of late. Following their cup replay success over Harps there was a fine 2-1 victory over Bohemians and a 4-1 success against Sligo Rovers.

“Dundalk always knew what division they were going to be in with the players and the quality they have,” Horgan said. “It might’ve taken them a while to get there. Their quality means they will never be in the First Division. There was a period in the first half of the second game in the cup where we might possibly have taken them.

“They haven’t looked back since. Those cup games, though, will not be a factor on Friday night. They will be here full of confidence. They’re in a better place now and that gives confidence. But there’s nothing wrong with our confidence levels.

“Our home form has been decent in the last month or two when it wasn’t before that when we were turned over a number of times. The supporters being in and the better form equate with one another. We might go one down and we might go two down. We need people to stick with us. This will go to the wire. We’re looking down but we’re also looking above us.”

The situation at the bottom of the Premier Division table is manic, with only six points separating Bohemians in fifth and Waterford in ninth. Last Friday, barring the stranded Longford Town, the other three of the bottom four - Harps, Dundalk and Waterford - all won.

“We accumulated 32 points and stayed up,” Horgan said of the 2016 season. “This year there will be a team on 40, maybe 42 points, that ends up in a play-off. It shows how competitive the league is. We’d be as well off with 26 points and two teams behind us on 12. Someone is going to end up in a play-off against a good First Division team.”