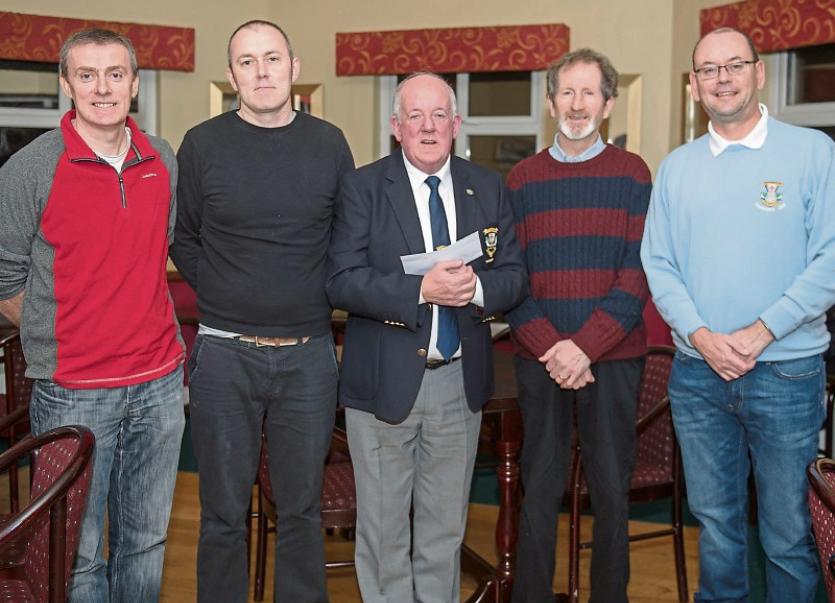 Course Development: Despite the inclement weather conditions which have prevailed over the past few months, the further development of Portsalon Golf course continues. The greens staff, under the direction of Paul McGinley and his team, continue to make enhanced changes to the Portsalon links. Both members and visitors have expressed their approving views on the new improvement to the 11th green. The development has the mound on the right hand side of the green removed. The new area will now have a much enlarged green and will also have a new bunker on the right hand side of the green.

Captains' Drive In: The Captains' drive in will take place on Sunday, 28th February. The day will commence with Captains John Logue and Lady Captain Sally O’Kane holding the official drive in at 10 a.m and this will be followed with a shot gun start at 10.30am. Members are asked to record their names for the event before 6 p.m on Saturday 27th as a draw for teams and tees will take place.

Fixtures: On Friday, 19th February there is an open seniors competition - members €5, visitors €10.

Saturday, 20th February open stableford. Sunday 21st is a members competition and Wednesday 24th February an open 18 hole stableford competition. A time sheet is in operation for all competitions at Portsalon Golf Club, contact 074 91 59459 for your tee time or go online at portsalongolfclub.com

On Saturday the winner of the open was Sean Kelly (9) Portsalon 32 points, runner up Andy Boland (13) Portsalon 31 points.

The sheet is on the board now for the Spring League which will commence on Sunday, 6th March and runs for 6 weeks.

Meanwhile there were fun and games on Saturday night, with more to follow. Entertainment Officer, Bridie Faulkner, assisted by Pauric McGeehin, Sharon Mononey, Laurence Devenney and Cathal Faulkner, staged a Games night on Saturday night last. Four teams competed against one another. The Latecomers and Girl Power were on even points and fought it out for a place in the final against Liam O'Neill's team who were Liam O'Neill, Alistair Henderson, Ann O'Meara and PJ Fitzgerald. Girl Power won and went on to battle in the final. All four competitors played this game. Four clues were hidden in boxes, had to be deciphered to find a code for the safe. The safe uncovered a giant Jigsaw. Even with four people putting it together it took some time to get it solved.

Girl Power emerged the winners, they were Sharon Moloney, Darragh McGowan, Mary McHugh and Kathleen McGowan. Many congrats to Bridie and her team who had all the games constructed from scratch and all were very well presented. More fun and games to follow in a few weeks. Watch this space.

The club competition on Sunday played over the Sandy Hills Links (16 holes) was won by John Boyce (9) with 35pts bot, the runner up was Barry Connor (5) with 35pts.

The Mulroy Links returned to Rosapenna at the weekend with a

great turnout of golfers from across the North West. The outing was played over the Sandy Hills Links

(16 holes) with the results as follows -

The next outing will take place at Rosapenna on Saturday, Feb. 27th Contact the Pavilion Golf Shop on

We played our Gaelteacht Match on Saturday against Dunfanaghy and

we had impressive 7-2 victory. Team Captain Joseph Gillespie was very happy with the result and takes our team to Gweedore this weekend.

The final Links outing in Dunfanaghy is on Tuesday, 1st March, time sheet

is on line or phone the clubhouse.

Grace McFadden continued her winning streak on Saturday, winning the

ladies on a very cold day.

The next seniors outing (ladies and gents) is on Monday, 22nd February -

which was Thinking Day when the PRO was a Girl Guide.

Bookings on line or phone the clubhouse.

in the draw for the Easter Hamper on 19th March. There will be an Easter Egg competition on Easter Saturday.

Tuesday, Feb. 9th saw a small turnout and as a result only one prize was given out and that went to Mark Rodgers (14) 38pts Bot.

With much drier weather visiting during the week, it brought with it larger numbers of golfers at the weekend.

The Quiz on Wednesday, 24th is in aid of club funds.

There has been very little golf to write about of late but we have had a few matches played and, hopefully, we can keep it going now.

Captain’s day is in Dunfanaghy on April 9th, giving us all seven Saturdays. Both Cruit and Portsalon have four matches played, Rosapenna, Portnoo, Cloughaneely and Dunfanaghy have three played and Gweedore have two played.

We urge all captains to arrange all their remaining matches, fix a date and play the match, if at all possible.

With another break in the unpredictable weather, the usual die-hards turned out over the weekend at Barnhill and leading the way home on Saturday was single figure handicapper Conor Friel [5] on 39pts.

With birdies at 1st and 5th eliminated by bogeys at 2nd and 3rd, a level par front nine of 21pts gave Conor a springboard to the winner's post with a further birdie at 11th and two dropped shots leaving him two points clear of nearest competitor Barry Kavanagh who, whilst finishing on 37 points, would rue that double bogey at par three 13th.

Sunday 14th saw the 'big guns' in action and none more so than Michael Collum [7] whose somewhat erratic start of birdie-blank-birdie-double bogey never looked like a winning score. But Michael's resolve is unquestionable and an 18pts outward nine followed by an inward nine of 17pts was enough to outpoint Don Ponsonby [4] whose start of bogey-blank-bogey was equally surprising but with the help of a birdie at 14th, Don managed a 34pts. finish.

Unfortunately, due to the bad weather which is forecast for this weekend again, the Captains' Drive-in, which was scheduled for Sunday, has been postponed. A new date will be confirmed in the coming days.

A reminder to everyone that the usual two nine competitions are still running. Finally the ladies wish to extend their sympathy to Eileen Daly and Margo Birmingham on their recent bereavements.

Thanks to Bill and Paula McCallion our Clubhouse took centre stage on Saturday night with our annual Valentine’s Night wine and cheese reception.

Bill and William Hamilton provided the music and were ably assisted by a number of members who took to the stage. Our Lady Vice-Captain, Nora Crumlish, amongst others, revealed some hidden singing talent and a few names have now gone forward for X-Factor auditions!

Food is available in the clubhouse every Saturday and Sunday 12-6.

Junior Golf: The biggest group of juveniles in a long while took to the fairways last Saturday. In the cadet section it was very competitive with Caolan Mc Fadden just shading it from the ever-improving Sean McBride. The senior boys was won by Conor Hanna in a close contest with Oisin Cannon. A new competition was played in the intermediate section with the different schools competing against each other. It was Scoil Mhuire, Creeslough, who came out on top. Weather conditions allowing, it is planned to have a scramble next Saturday morning.

So far, the feedback that we have been getting is that the golf club is the ideal venue for parties of up to one hundred people. Contact Sarah on (074 91 36335).