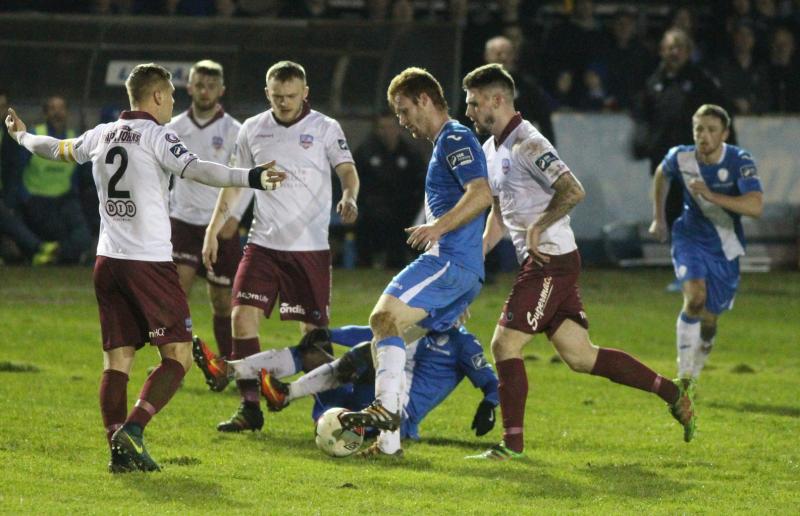 Sean Houston, in action against Galway when the sides met in Ballybofey earlier this season.

In-form Finn Harps will take a giant step towards Premier Division survival if they can pick up a fourth win in five league games when they meet Galway United in Ballybofey on Friday night (8pm).
Harps remain just outside the relegation zone following last weekend’s welcome 3-2 victory at Bray Wanderers.
And they will add to Galway’s relegation worries if they can manage a rare victory over the Tribesmen. Galway are second from bottom in the Premier, five points adrift of Harps with one more game played.
Harps boss Ollie Horgan however, said that if recent results against Galway are anything to go by, his team won’t have it easy.
“They’re a quality side,” he said.
“They’ve got quality players who have played at a top level and many of them are still going well. We haven’t got the best of records against them. I think we have only beaten them once in something like ten games.
“They should have got something out of the Cork game last Friday (Cork won 2-1). They hammered Drogheda before that and hammered Limerick too.”
It’s the third league meeting of the sides this season. They drew 1-1 in Ballybofey back in March on a night when it was generally felt Galway deserved the win. The Westerners did manage to pick up all three points, coming from behind to beat Harps 2-1 at Eamonn Deacy Park in May.
Their winning goal that night came in injury time through Vinny Faherty. This week the striker left the club, joining their relegation rivals Sligo Rovers.
Another player to feature that night was Lee Grace and the highly-rated central defender won’t play tomorrow night after signing this week for Shamrock Rovers.
Galway will however, be able to call on their latest signing Jonah Ayunga. The 20-year-old spent the first half of the 2017 SSE Airtricity League season on loan from Brighton with Sligo Rovers, netting four league goals in 21 appearances.
For Harps fans, there will be a chance to see new recruit Mark Timlin making his home debut.
The Buncrana man is likely to start again after marking his debut in Bray with a goal just before half time.
If Harps avoid defeat, they could move level on points with Limerick above them. Limerick, who are a point ahead of Harps in seventh spot, travel to play Dundalk on Friday night.
Horgan however, is refusing to look at the possibility of catching those sides immediately above his team.
“Limerick will be okay,” he said.
“Bohs will be okay too. Look what they did to Cork City. As long as they have Akinade in the side, they will be a match for anyone.
“If Akinade’s on song, Bohs could beat anyone in this league. Mind you, without Akinade, they could lose to anyone.
“But we’ve enough to be worrying about.
“One slip-up and you’re right back down in the relegation positions. Two slip-ups and you could be gone - it’s that tight down there.”