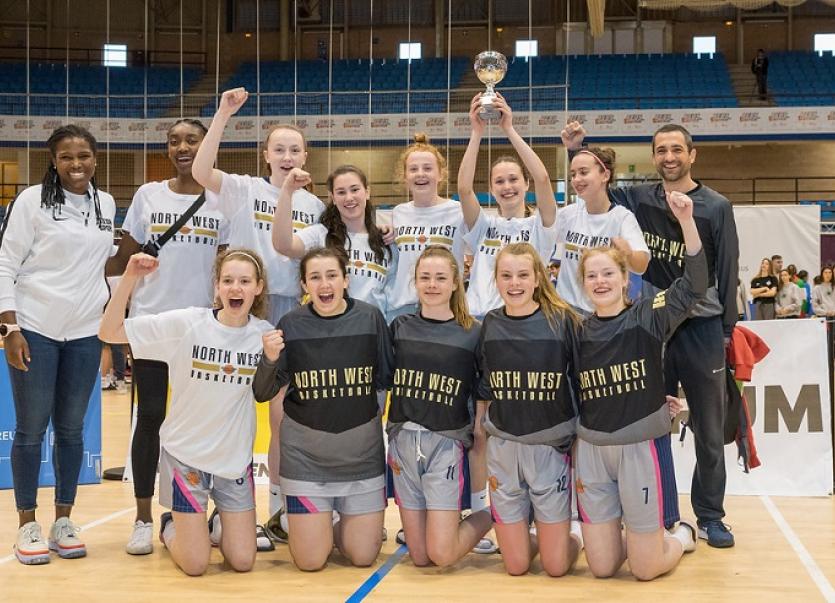 A group of 23 boys and girls - all part of the North West Area Board regional academy, along with 7 coaches and assistants, travelled to Salou, Spain over Easter to participate in the Mare Nostrum Cup basketball tournamentwell.  Mare Nostrum Cup is a tournament with over 220 teams participating in both boys and girls competitions from U-10 up to U-18 and with different divisions in each group.

It was an amazing opportunity for players from Ireland to experience a tournament like this, they had worked for several months to prepare and all their hard work paid off.  The style of play is different than that in Ireland and our academy players were very much prepared to compete at this level.

Our teams were placed in Division B and games got started shortly after arrival on the Monday.  Girls games took place in Reus and girls had good results in all the group stage games playing teams from Askatuak S.B.T., C.B. Igualada and A.E.C. CollBlanc.  Girls went into their semi-final vs C.B.F. Cerdanyolda as strong favourites on their group performances but it was the 4th quarter before they got ahead in the game setting up a final with C.B. Llinars.  This was the toughest game for the girls over the week but the girls worked hard defensively and offensively and came out deservedly on top.

Unfortunately the Sligo All Stars girls on academy had previously committed to a club team travelling to another tournament in Spain at same time so were unavailable.

The boys got their tournament off to a shakier start on the Monday evening vs.C.B. Sama losing out in a close encounter by 1 point.  This loss gave the boys the determination to play at the next level for the rest of the tournament beating Centre Católic Hospitalet and B.C. Sant Joan Despí well on the Tuesday.

The Boys faced S.E. Sant Joan De Mata in the semi-final on Wednesday knowing that a victory here gave them the opportunity to redeem themselves vs C.B. Sama in the final.  And redeem themselves they did in the final with all 13 players playing their part in the game. A display of grit and determination from the North West academy showed no respect or sympathy for the opposition where they treated us to some unbeatable full court defence, great shooting and drives to basket and topped off by a little dunking.

Off the court you saw the players come together as they enjoyed the bus trips to and from games, hanging out by the pool in the Salou sun and finishing the trip of with visit to Port Adventura. It was a great all round experience for the players and coaches.  One that they will cherish for years to come.

This was the first international trip for our academies and hopefully the first of many.  Trip couldn’t have taken place without the support of all parents and players and financial help from Donegal Daily, ABP Beef, Councillors Barry O’Neill, Michael Naughton, Gerry McMonagle, Jimmy Kavanagh and Marc McSharry.

A massive thanks to the coaches and managers who travelled with teams - Jona Quinea Morea, Niall McDermott, Tracey Flood and American LYIT Scholars, Cullen Donovan, Spencer Williams, Adiya Henderson and Jaelyn Tweedy  - these scholars are all great role models for our young players .