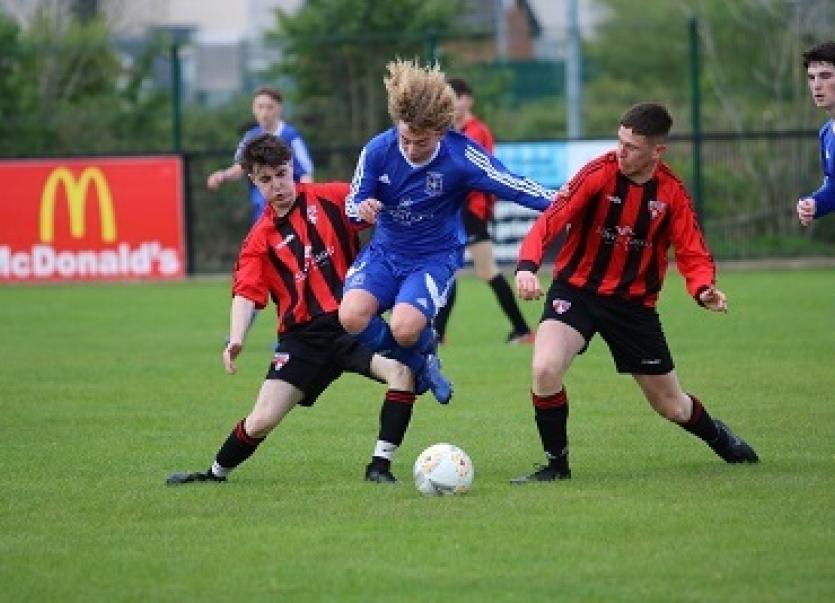 A strong performance from Letterkenny Rovers in the final half hour saw them come from behind to defeat a determined Fanad side in the Donegal Youth League at a crisp Leckview Park on Wednesday evening.

Letterkenny Rovers 6
Fanad Utd 2
Games between the two are historically hard fought affairs and this proved no different and it was Fanad who started the brighter with John Friel firing narrowly over after just three minutes before Fanad took the lead on seven minutes when Liam McGrenaghan rattled home a penalty after Friel's cross was adjudged by referee Mick Lagan to have been handled by Thomas Keys and he had no hesitation in pointing to the spot.
That lead was shortlived though as Rovers drew level just two minutes later with their first meaningful attack. Conor O'Donnell won possession in the middle of the park before teeing up Jack Dwyer and his inviting throughball was latched onto by James Kernan and the energetic striker slotted home off the inside of the post.
Chances were at a premium for the remainder of the opening half with McGrenaghan screwing an effort just wide from the edge of the box while Rovers - although dominating possession - created very little with the nearest they came was when Kyran Coyle headed just over from a Joel Gorman free kick.
The tone for a much livelier second half was set after just ten seconds when Fanad re-took the lead when a Fanad attack down the right hand side saw Ronan Sweeney cut in and fire home with a sweet left footed effort giving home goalkeeper Aaron Hepburn no chance.
Rovers though had chances through Kernan (twice) and Coyle to level before the game's turning point came on 57 minutes.
Fanad had a great chance to extend their lead but Shaun Kerr headed over when well placed and Rovers took full advantage on 64 minutes after sub Nathan Plumb had missed a great chance to level it Jack Dwyer fired home after some good play by sub Dylan Doogan who impressed when entering the fray.
Rovers then went in front just moments later when Jonathan Coady netted with a superb left footed effort giving Dan Kerr no chance in the visitors goal no chance.
Rovers had a number of chances to extend their lead while Fanad were happy to hit on the counter and it wasn't until the 84th minute that Rovers could breath easily as Plumb got on the mark when being teed up by Gorman before further goals late on through a Gorman header and Plumb with a fantastic finish wrapped up the win as Rovers deservedly made it three from three.
Letterkenny Rovers: Aaron Hepburn, Leon Doherty, Caolan McConnell, Kyron Coyle, Thomas Keys, Johnathan Coady, Conor O'Donnell, Joel Gorman, James Kernan, Jack Dwyer, Conor Friel.
Subs used: Dylan Doogan Adam Yisau, Nathan Plumb, Jake Kelly

Eany Celtic 0
Keadue Rovers 1
Eany Celtic's winning run came to an end against Keadue this evening at Eany Park after a superb last minute free kick from Mikey McFadden found the net.
Both sides had chances either side of half time with Michael Coughlan coming close for Eany and Maurice McGee almost giving the visitors the lead.
In the 70th minute Nathan Maxwell's shot had the Keadue keeper beaten but struck the crossbar and Jack Byrne's follow up volley was well saved.
Odhran Burgess was denied in the 80th minute by a superb save from Eany keeper Enda O'Hagan who had been excellent all night.
In the 93rd minute Keadue were awarded a free kick on the edge of the Eany box and Mikey McFadden converted with a finish that would have graced the Premier League to make it two wins from two for the visitors.

Swilly Rovers 3
Milford Utd 0
Swilly almost went ahead on five minutes when a stray back pass eluded the keeper and everyone thought the ball was in the net but was urgently cleared by the Milford keeper Eoin O Donnell.
Swilly’s Evan Hewitt was just wide on 10 minutes with a close range effort before Swilly's Matthew McLaughlin's fine shot from 20 yards was well saved on 20 minutes.
Evan Hewitt's six yard effort was just wide on 25 minutes as Jamie Lee Blaney's men threatened and they eventually broke the deadlock on 26 minutes when Eoin Logue's fine cross was converted well by Lee McPaul.
Swilly's Oran Dunworth's powerful drive produced a wonder save by Milford keeper Eoin O Donnell on 40 minutes before the Ramelton men did double their lead when Eoin Logue's left wing cross was headed home in style by Evan Hewitt on 45 minutes.
In attendance at the game were local men Barry McNamee (Derry City captain), Tony McNamee(Finn Harps) and Kyle Callen McFadden (Sligo Rovers captain) and they saw Clive Callen of Swilly being sent of on 68 minutes for a second bookable offense before Matthew McLaughlin made it three on 70 minutes when he slotted home a penalty after Rory O'Donnell took down Hewitt as Swilly made it three wins from 4 and bounced back after last week's defeat at Keadue Rovers.

Lagan Harps 2
Drumkeen 1
Another victory for Lagan Harps as they defeated 2-1 Drumkeen in a hard fought game.
Drumkeen came quickest out of the blocks and took the lead scored in the second minute with a defence splitting pass and Drumkeen number 9 Brandon Ndlovu raced through to score.
Lagan settled into our game and were level in the seventh minute after Jack Canning's throw in was flicked on and James Wilson pounced to score his third goal in three games.
A scrappy affair after that with both sides cancelling each other out.
In the 37th minute Harps lost Dean Murray to injury when he landed awkardly. Bradley Doherty came on in his place and had an immediate impact causing a bit of chaos in the Drumkeen defence when Ciaran Quinn's free kick bounced around the box and fell at the head of Darragh Rodgers to nod the ball into the net.
Lagan controlled the remainder of the match with Oran Downey sweeping up all that was fired at him in the Lagan defence. A good defensive performance from the Lagan boys in the second half.

Bonagee 2
Gweedore Utd 1
Bonagee move back top of the Youth League as they came from behind to defeat Gweedore Utd 2-1 at Dry Arch Park.
Paul Higgins' men now have three wins and a draw from 4 games but fell behind in this one after 15 minutes when the visitors scored a free kick through Nathan O'Brien.
Peter Carr levelled on 31 before Bonagee secured a precious three points through a Jack Murphy penalty midway through the second half.