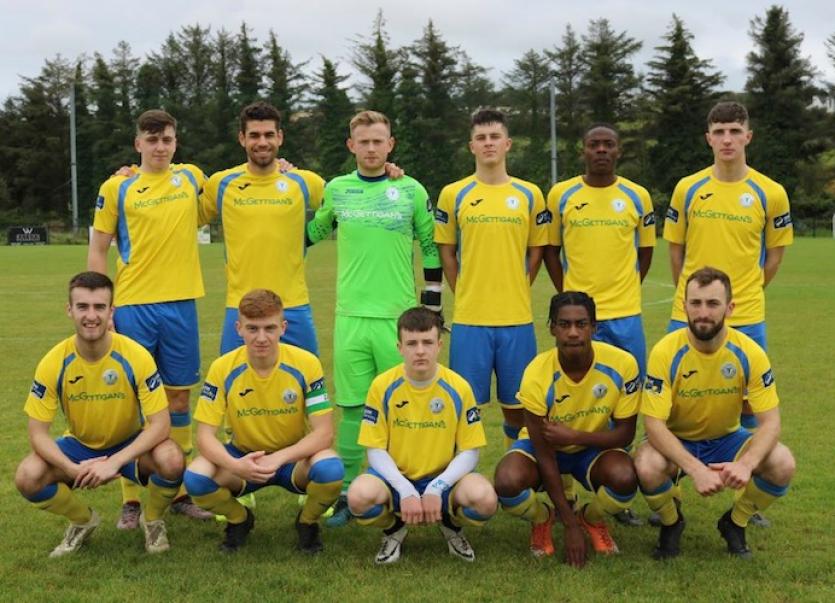 Letterkenny Rovers made it two wins from two to secure top spot in Group A of the USL League cup after defeating a strong Finn Harps Reserves 3-2 in a top quality game at Leckview Park on Sunday.

This was a game which showed all that was good about Intermediate football with a top-class encounter between two very good sides with Harps also giving the chance to give games to first team panelists Colm Deasy, Joshua Smith and Liam Walsh among others who no doubt were keen to impress watching Harps senior boss Ollie Horgan.

It was Harps who settled the better but it was the home side who took the lead with their first attack of note on 7 minutes when a long kick-out from home goalkeeper Rory Kelly was latched on to by BJ Banda and he did well to shrug off the challenge of a defender before firing a neat effort into the corner.

Harps though almost levelled but Smith saw his effort go just over while Liam Walsh fired a free kick just wide. Rovers were then indebted to Kelly who was quick out of his goal on 31 minutes to save a Ronan Gallagher point blank effort with his legs.

Banda then fired just wide in a game full of chances while the busy Johnny Bonner worked a great chance but Harps goalkeeper Jamie Bell made a super stop to deny him just before the half time break.

Rovers spurned a gilt edged chance to double the advantage just after the restart but Pajo Rafferty failed to capitalise when shooting high over the bar after a mix up between goalkeeper Eoin McGing and Lee McLaughlin, both of whom came on at half-time for Harps.

That miss looked set to be pivotal when Harps levelled just minutes later when Kieran Farren did well on the right before crossing for Ronan Gallagher who calmly slotted home to the bottom corner.

A draw would have seen Harps top the group but their joy at restoring parity was short-lived as Rovers took just 90 seconds to regain the lead when Emmett Friars powered home a bullet header from a Bonner corner giving McGing no chance. To their credit Harps  came right back at Rovers and a neat move involving Corey McBride and former Rovers player Gabby Aduaka saw McBride fire just wide. Referee Vincent McLoughlin heard loud protests for a penalty from Harps after they thought a Rovers defender had handled in the area but those protests fell on deaf ears. From the resultant corner Deasy had a great chance to level and he should have done better but shot high over the bar.

Rovers extended their lead on 70 minutes when sub Matty Harkin scored just twenty seconds after entering the fray when he forced a Harps defender into a mistake and he blasted past McGing giving the keeper no chance.

Things should have been comfortable from then on in for a Rovers side who had plenty of possession but Harps made things interesting on 84 minutes when a move involving Daragh Ellison, McBride and Deasy saw his cross being volleyed home by Joel Bradley-Walsh.

Rovers though saw the game out well with an  impressive defensive showing from Conor Gormley on his debut and its  they who book  a home semi final against the runners up from Group B with their opponents to be decided next week when Cockhill host Bonagee.

Finn Harps also qualify for the last four and will have an away last four clash against the side who finishes top of Group B.

All square at Dry Arch Park

Chris Breen struck to earn Bonagee United a share of the spoils against Derry City Reserves in the Donegal USL League Cup on Thursday night.

Breen's leveller, after Kevin McKinney opened the scoring with a superb volley, rescued Jason Gibson's hosts, who were indebted to goalkeeper Eugene Ferry in the first half as he kept Derry at bay.

But Derry weren't denied when McKinney was picked out at the far post from a corner and he rifled to the net. Bonagee United who drew with Derry City on Thursday night

It was going to take something from the top drawer to beat the on-song Ferry and his side responded soon after.

Former Finn Harps attacker Breen - who was sent in as a half-time replacement for Duncan Patterson - surged through and tucked to the net after skipping past the advancing goalkeeper Daniel Houghton.

Right at the end, with the final play of the game, Bonagee almost sneaked the win, but Gareth Breslin couldn't get on the end of a free kick when well placed at the far post.

Jack Parke carved out a tidy opening for the visitors 16 minutes in, with Jack Coyle - son of legendary Derry striker Liam - firing wide from the edge of the area.

Eugene Ferry, the Bonagee goalkeeper, saved superbly from Ferry with the follow-up by Mark McFadden also kept out by the home number 1.

Garbhan Grant fired off target from distance before the home side saw a glorious opportunity go amiss.

Grant's attempt, with Houghton off his line, fell invitingly to Ryan Rainey at the back post. The goal might have been yawning, but Rainey's shot, off the lesser-used left foot, was into the side netting.

Ferry saved the hosts again on the half-hour when he saved and managed to hold onto Coyle's close-range header.

After Rainey drove wide from distance at one end, Eugene Ferry repelled another Derry attempt when he clawed away Patrick Ferry's shot from 12 yards after Parke made the yards out on the right.