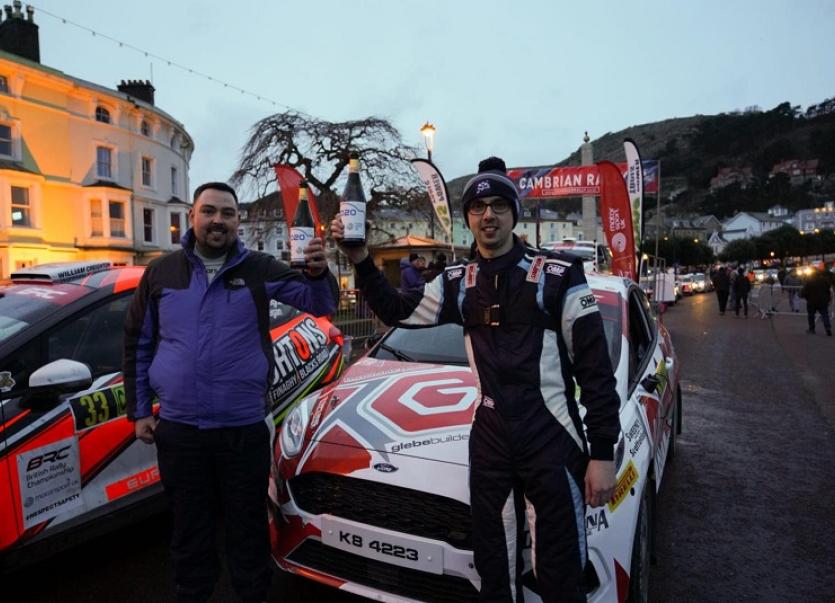 Kelly brothers on the ramp

Donegal Town’s David and Darragh Kelly took 3rd place in the opening round of the British Rally Championship over the weekend in Wales. The Cambrian Rally seen crews from all corners head for North Wales for the opening round of the British Rally Championship series.
The event kicked off on Saturday morning at 9 am with a loop of 4 different gravel stages. Kelly who admitted he was a little slow off the mark used these first stages to bed himself into the new car. “We weren’t on the pace in the morning, getting used to the new car and the gravel surface was a lot to take in. When we got back to service we changed the tyres for a softer compound and decided to start over for the next three stages. Our aim was to get on the pace of the front runners and this we did.”
Kelly was lying in 4th place at the mid-day service and by the end of the day had clawed his way back up the 3rd place. “Our stage times where getting quicker all day, 3rd place points on the board this early in the year is fantastic. Coming over here we didn’t think we would get a podium this early in the season, it's fantastic!”
The next round of the British Series moves to Cork for the West Cork Rally in mid-March. Switching back to tarmac should suit the Donegal man, but the pace will still be rapid. With entries expected to be full the competition will be quicker than ever over St. Patrick’s weekend. The West Cork Rally is a round of the Irish Tarmac Championship as well as the British Rally Championship.
Northern Irish man William Creighton took victory at the weekend with Finley Reston from the UK in 2nd place.
“We want to build on this result now and push forward into Cork” Kelly explained.
David would also like to take this opportunity to thank all of his sponsors, navigator and service crew who put in a huge effort to get the car prepared for the events.