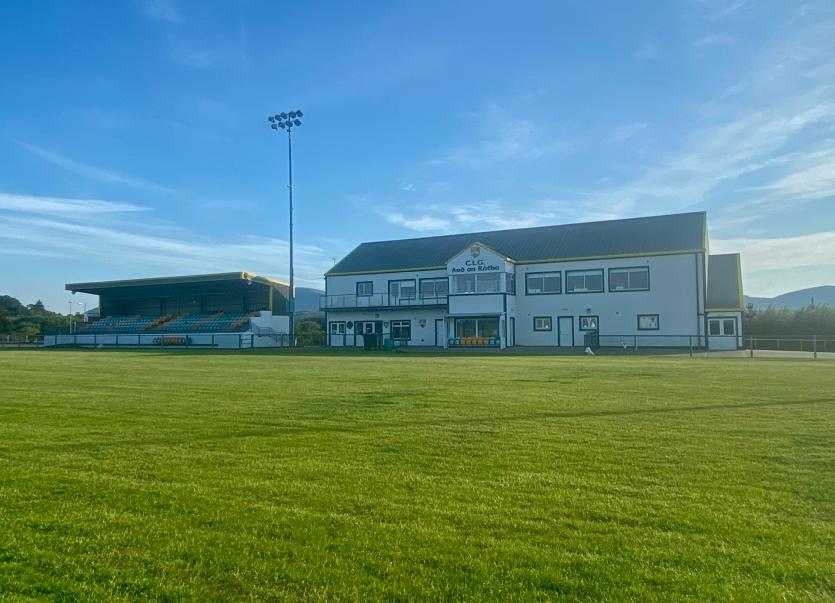 Donal Reid visits Ardara GAA club which next year will celebrate its 100th anniversary. With strong family connections in the town, Donal always loved a trip to Ardara during his playing days

I’ve crossed the Gweebara Bridge from lovely Leitirmacaward and moved into a part of the county that formed so much of my childhood years.
Ardara, Rosbeg, Kilclooney, Narin and Portnoo bring back so many fond memories for me. Our family used to spend long summer evenings on the expansive and golden Tramore Beach in Narin.
In 2012, The Irish Times named Ardara as the best village in which to live in Ireland.
“Some of the main scenic points near the town are the Glengesh Pass, the Maghera Caves and Waterfall, and the views out over the Atlantic from Loughros Point” - (ardara.ie).
My mother’s sister Mary Brennan (nee Ward) was married to Ardara local business man Frankie Brennan who played for both Donegal and Ulster in his footballing years. So, I have more than a passing interest in Ardara and its environs
Ardara not only has a famous GAA club, it also has a famous name for its tweed and heritage.
“In 1893 an improvement scheme supported by the congested districts board was started in Ardara, to help to make the production of Donegal Homespun in to a marketable commodity. Improved methods of yarn spinning, hand weaving and inspection of the finished tweed soon elevated Donegal Homespun to the International fashion markets of the world.
“This was a very successful enterprise for the Ardara area and every second home in the parish had a hand weaver working… 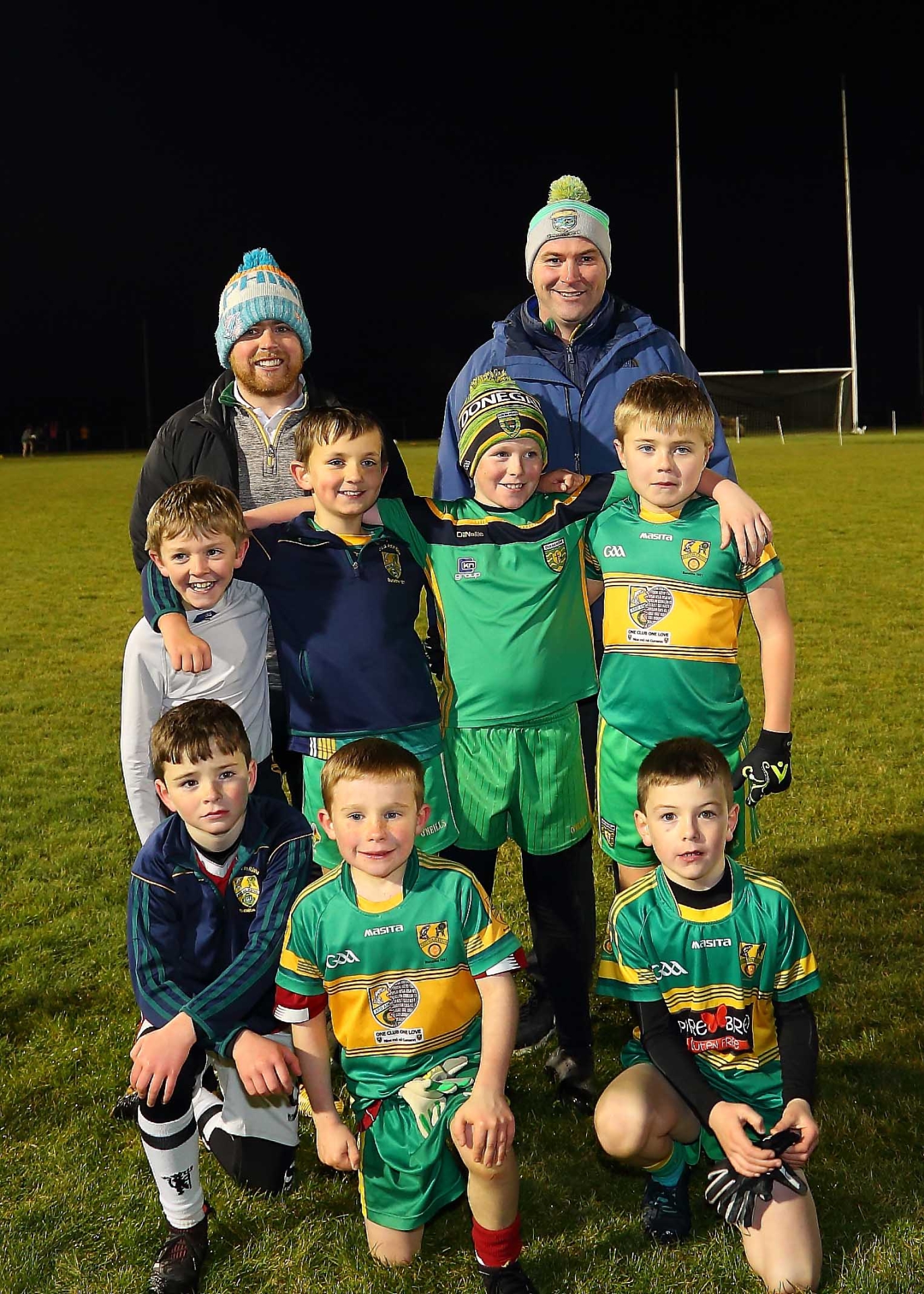 Daire Byrne’s team with coaches, Oisin O'Donnell and Brendan Boyle at the Michael McNelis U-10 tournament in Ardara

“Ardara is also one of the five designated heritage towns in Donegal. The Heritage Centre located within the centre of the town was established in 1992. The building goes back to historical times as the town Courthouse and then home of the Ardara Library.
“The focus of the Heritage Centre is to define the basis of the Traditional Industry of Ardara which was the Tweed Industry.
“Towns like Ardara have been designated Heritage Towns due to their uniqueness and the diversity of their location, history, architecture, and people. Much of this diversity is evident in their architecture, from the vernacular architecture of Ardara.
“Ardara and its hinterland has a rich built and cultural heritage. There are a number of archaeological monuments of note in the area which date from prehistoric times. A massive drystone fortification, Doon Fort is hidden on an island in Loughadoon.
“Referred to as the ‘jewel in Donegal’s crown’, Doon Fort is a veritable paradise of medieval archaeology, folklore, mythology, romantic history, wildlife, flora and fauna.” (ardara.ie).

GAA history
Ardara has a rich GAA history. The senior team have won six senior county titles and were losing finalists on five occasions.
Like the fortress at Loughadoon, Ardara GAA didn’t yield too many victories to visiting teams. 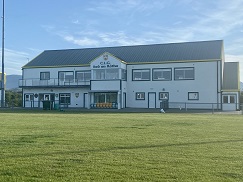 I played there many times as a young man and it was a venue where I learned a lot from more seasoned players of Ardara. They always had a string of gifted players who represented Donegal at all grades.
They played a brand of open football but no quarter was asked nor no quarter given when things got tight. You certainly knew you were in a game when you played against the Ardara men.

Brennan’s Bar
After games we would head for Frankie Brennan’s Bar for food and some beverages where Frankie and Mary had always a warm welcome for me.
Frankie and aunty Mary always asked about the Reid family in Killygordon first. Then the less important thing - football.
Ardara people who knew Mary would agree that she was softly-spoken, warm-hearted and very kind.
She ran a B&B at the premises which was always busy and friendly.
Ardara people are very proud of their community and their GAA club. During the playing season, Ardara’s GAA pitches are full of youngsters in the evenings where countless volunteers give up their time to be actively involved with the club. 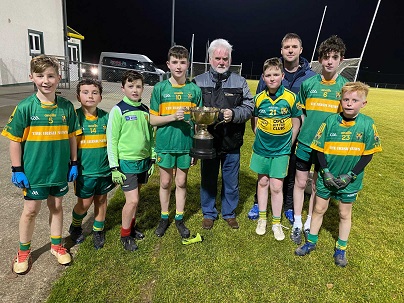 All clubs have sung and unsung heroes. Indeed, Ardara has them too.
Donegalgaa.ie/ard-an-ratha gives a nice synopsis of recent club history – “Following a heady decade at the start of the new millennium which saw the club win two senior championships in 2000 and 2004 in addition to three Senior Division 1 League titles, the next decade saw a period of transition for the club.
“A huge effort was put into development which saw our new pitch, clubhouse and stand developed into one of the top grounds in the county, culminating with the hosting of Comórtas Peile na Gaeltachta for the first time in 2015 – a huge occasion for the parish.
“The club also picked up an Ulster Presidential award for coaching in 2013, the Donegal and Ulster Ground of the Year Award in 2015 and the Gold Club Maith award in 2012.
“On the playing fields, a County Minor Division 1 League title in 2011, the U14 Division 1 League in 2013, the Ladies Intermediate Championship win in 2015 were a few of the main highlights.
“2019 saw another year on an upward curve in the fortunes of CLG Ard an Ratha. The return of the senior team to Division 1 after a three-year absence, the Under-12 Boys winning the club’s second Div 1 title in the grade and the first in any Division 1 grade since 2006, our U-12, 13 and 14 girls competing at the top end in their competitions only a few of the highlights of what was a very busy and eventful year for the club.
“With the club only over a year away from its centenary in 2021, we look forward to going from strength to strength as we move into our second century”.
Ardara and its surrounding communities of Narin, Portnoo, Kilclooney and Rosbeg have everything that is precious and wonderful about Donegal county.
At the heart of this community is the Ardara GAA club which binds the people.
The club provides a social outlet for children, adults and families which serves to strengthen community spirit.
The senior team are back in Division 1 after going through a period of transition.
Ardara were always a team that competed at the top and I’m sure that top honours are not too far away.
I’d like to thank Ardara for all the great memories, especially Uncle Frankie, Aunty Mary and all of my Brennan cousins.
I’d also like to congratulate the Ardara club on your fantastic pitch and facilities development and wish you every success for the future.
Go mbeannaí Dia sibh.