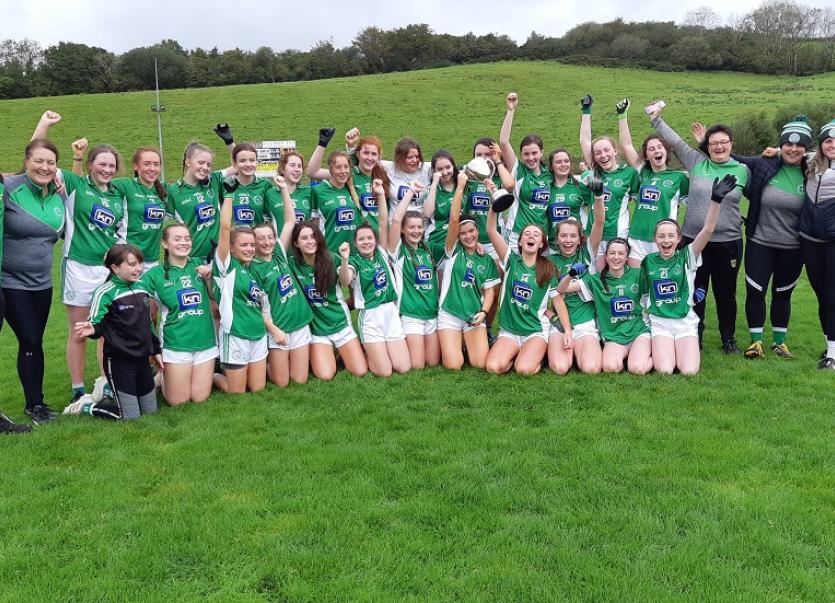 St Naul's proved too strong for Aodh Ruadh in the Ladies Division One Minor League final at Trummon on Saturday morning.

St Naul's 5-11
Aodh Ruadh 3-6
The Parish of Inver girls took a grip early on and never really looked in trouble. They were strong in most areas, especially at midfield where Orlaith Greene and Catherine Gallagher worked very hard; Annie McGroary was tigerish at the back; Enya Gallagher was possibly their best player along with Caoimhe Walsh and Aoife Greene was impressive in the front line.
It has been a good few weeks for St Naul's ladies, winning the county intermediate title a couple of weeks ago.
St Naul's had the breeze and started really going 1-3 ahead inside five minutes. They would also finish the half really well with two goals to lead 3-5 to 1-1 at the break.
The star of the opening five minutes was Caoimhe Walsh, who accounted for all of St Naul's 1-3, all from play apart from one free. Her goal was very well taken, first timing to the corner of the Aodh Ruadh net.
Aodh Ruadh found it difficult to build attacks but they did get a goal back on six minutes when a shot was half-blocked and fell invitingly for Aoibheann McGarrigle to finish from close range.
Neither side added to their score until after the water break when impressive corner-back Caoilfhinn Deely bombed forward to set up Erin Doherty to point. Niamh Brown added a free before Enya Gallagher fired home St Naul's second goal after good work by Catherine Campbell and Aoibheann Gallagher.
A third goal arrived on 31 minutes when Naomi Kelly's shot for goal was blocked and fell to Niamh Brown to finish. Katie O'Brien had the final point of the half for Aodh Ruadh.
The winners also started the second half well with Naomi Kelly pointing and then delivering the pass of the game to Caoimhe Walsh who fired home the fourth goal. Niamh Brown and Walsh (after another great pass from Kelly) stretched the lead to 4-8 to 1-1.
Aodh Ruadh hit back with three points in quick succession, all from Katie O'Brien to leave it 4-8 to 1-4 at the water break.
Erin Doherty added to the winners' tally with her second point before Bridin Maguire (moved from goals to full-forward for the second half) first timed home a second goal for Aodh Ruadh. Katie O'Brien added a point, but St Naul's responded with a Walsh free and a fifth goal from one of their stars Enya Gallagher.
Bridin Maguire blazed over with the goal at her mercy but then won and fired home a penalty on 56 minutes, while Caoimhe Walsh concluded the scoring with a good point from distance.