Brilliant first half performance the catalyst for victory over Armagh 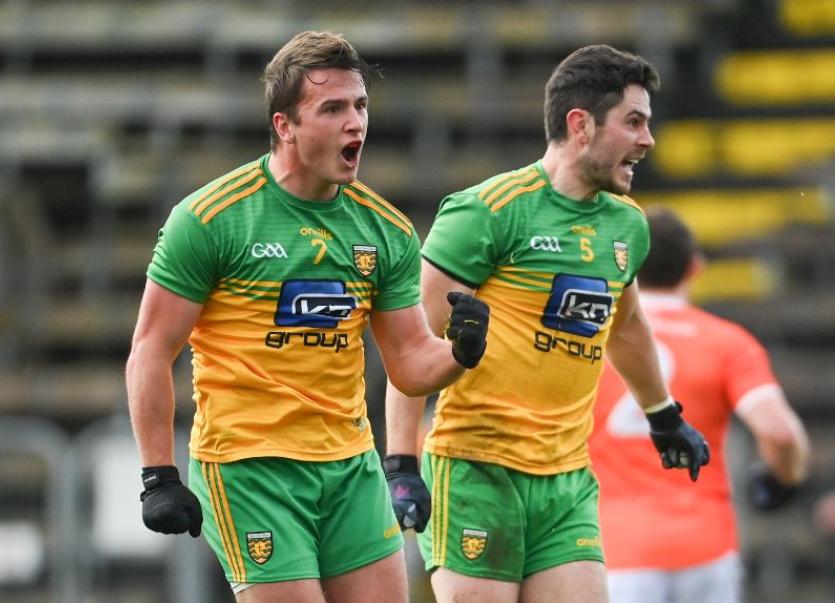 A wonderful first half display during which Donegal showed all their power, class and quality was the stepping stone towards another brilliant championship win as they eased into another provincial decider on Saturday.

Declan Bonner had warned against complacency against an Armagh side who were fancied by many to provide a real test in this semi-final.

But Donegal were well organised throughout and bossed this game almost from the off. Indeed while they kicked scores at will in the first half, they kept Armagh to only three points in that opening 35 minutes, all of which came from frees.

Leading by 12 points at half time, 1-12 to 0-3, Donegal kept the scoreboard ticking over in the second half. And such was Donegal’s potency in front of goal, they had 13 different scorers over the 70 minutes.

Donegal had one change from the Armagh game with Eoin McHugh in for Jeaic Mac Ceallabhui. However, the game was only four minutes old when Mac Ceallabhui was called in with Stephen McMenamin forced off as he pulled up with what looked like a hamstring injury.

But it didn’t affect Donegal who put together one of their most impressive openings halves of football. Michael Langan won the throw-in and strode forward to fire over. Indeed, there was a goal for the taking.

Eoghan Bán Gallagher doubled the lead before Armagh got back on terms with two Rian O’Neill frees by the ninth minute.

But they would not raise another white flag until the 33rd minute, another O’Neill free. In between Donegal took complete charge making impressive use of the forward mark.

By the water break Donegal led 0-5 to 0-2 with Jamie Brennan, Peadar Mogan and Caolan McGonagle pointing.

And even after Rian O’Neill’s third free, Donegal struck for a goal. A high ball into Michael Murphy broke to Peadar Mogan near the sideline. Murphy went one way and Mogan outstripped the Armagh cover to cut in and fire to the net.

And before the half-time whistle, with Armagh in disarray Michael Langan (from outside the 45) and Ryan McHugh added to the tally for a 1-12 to 0-3 half-time lead.

Rian O’Neill with a free and ‘45’ cut the lead but Ciaran Thompson replied for Donegal. Jamie Clarke had Armagh’s first point from play in the 49th minute but two fisted points from Jamie Brennan and Patrick McBrearty, just after being introduced, had Donegal ahead 1-16 to 0-6 by the second half water break.

Michael Murphy got his first point while Jamie Clarke and substitute Conor Turbitt had Armagh points to put a better look on the scoreboard.

Murphy and Andrew McClean had Donegal points while Rian and Oisin O’Neill added to the Armagh tally.

By the finish, there were 12 points between the sides with Oisin Gallen and Michael Langan putting the icing on the cake.

Donegal can now turn their attentions to another Ulster final and they’ll meet the winners of tomorrow’s second semi-final in which Down meet Cavan.