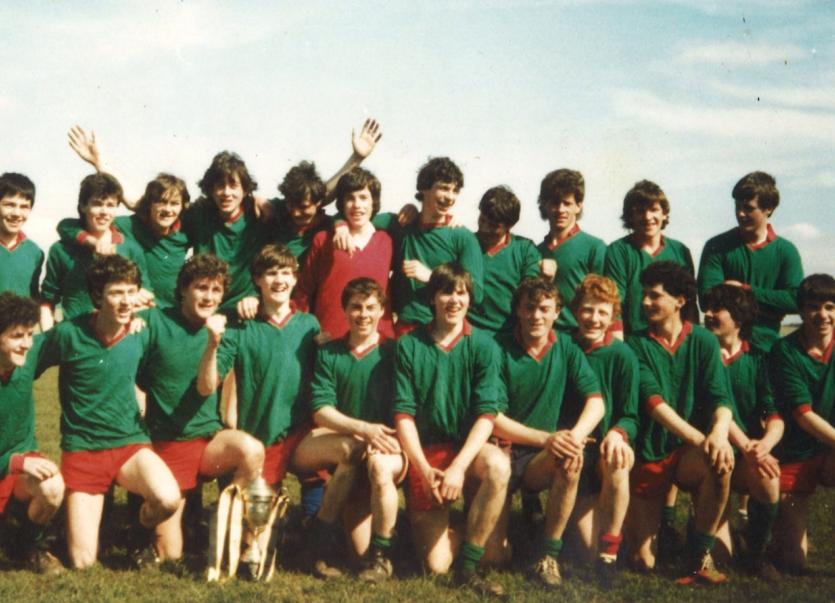 Luke Aston with his son David

CARRICK MARKEY CUP STORY
The memorable Carrick VS Markey Cup story of 1985 began with a home game against Killybegs VS followed by two big wins over Glenties Comprehensive and Abbey VS. They defeated Milford Convent 3-6 to 0-4 in the Co semi-final.
The Donegal final was against Pobalscoil Gaoth Dobhair, played in Kentucky in Ardara with Carrick winning a tight contest 2-4 to 2-1. Scorers were John Joe Doherty 0-3, Noel Hegarty 1-1, Mark O'Donnell 1-0.
In Ulster Carrick met Cavan Town VS and won comfortably 4-7 to 0-6 with scorers - John Joe Doherty 2-2, Noel Hegarty 1-0; Roger McShane 1-2, Mark McShane 0-1.
In the Ulster semi-final the opponents were De La Salle, Belfast with Carrick coming out on top 3-8 to 1-6. Scorers were Noel Hegarty 1-3, Damien Gillespie, John Joe Doherty 1-0 each, Roger McShane 0-2, Mark McShane, Steven McShane, Colm McGinley 0-1 each.
And in the Ulster final Carrick put in a great first half display against Newry VS to lead 4-4 to 1-1 at half-time and they held on against the wind in the second half to finish winners 4-5 to 2-4 with Roger McShane accepting the cup from Art McRory of Tyrone.
Scorers in the Ulster final were: John Joe Doherty 2-2, Roger McShane 1-2, Noel Hegarty 1-0, Mark McShane 0-1.
Carrick had just two days to prepare for the All-Ireland semi-final, but the short preparation time and the journey on the morning saw a tired team lose out to Edenderry 2-7 to 1-5. (Edenderry would go on to win the All-Ireland final, defeating Tuam 2-8 to 1-1).
Paul Carr, who would win an All-Ireland U-21 medal with Donegal in 1987 was part of the team which won the Donegal title but he was ineligible for the Ulster campaign because of age, but he was back in the side for the All-Ireland semi-final.